A few Patch Ideas for the new RPJ Pigeon Plink.

Since I started this whole thing with a feature request on Squinkys GitHub last year, I thought that I should present this beast of a VCO and a few of the unlimited possibilities you get with it. Thanks to @Squinky for developing Kitchen Sink and a HUGE thanks to @robert.kock for porting them over to V2 and for implementing every wish I had for this module over the last weeks. @TanaBarbier added his ideas into the mix too.

But, enough babbling, here are a few patch ideas with RPJ Pigeon Plink, the first four are shown in this video: 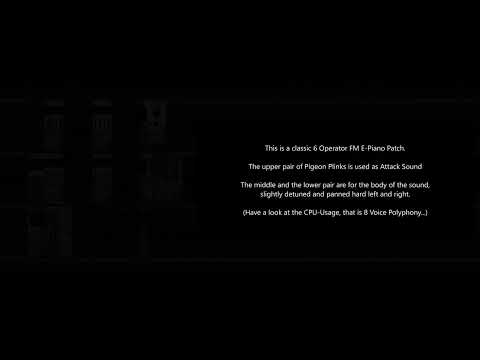 The E-Piano A classic 6 Operator-FM Patch, with 3 Modulator-Carrier-Combinations in parallel, for playing with a keyboard. 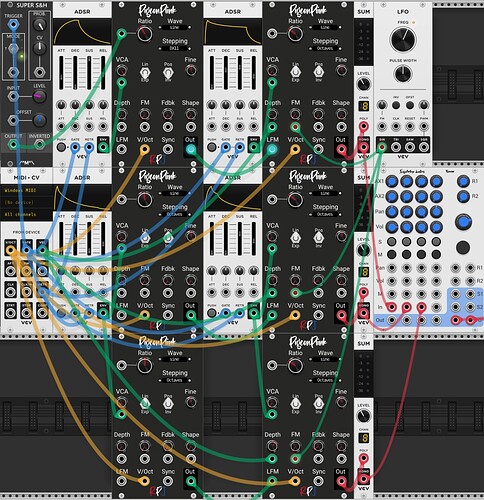 The first row is responsible for the Attack and Release-Sounds (Key-Off-Plink). The modulator’s VCA is set to fully open and the Polarity is reversed, so that the first ADSR is Ducking the sound while a key is pressed. The Result is, that the Output of this modulator will FM the Carrier only for a short amount of time at the beginning (attack phase) and again in the release phase of the ADSR when the key is released. Play around with the release of both adsr’s to change the amount of Key-Off-Sound. The Modulators Stepping is set to DX11 and its Ratio (around 10.00)is modulated with a polyphonic S&H to give you different timbres of the attack and release with every new note played.

The other rows are for the body of the sound, a little bit of feedback on the Carriers and a short Attack-FM. Both Carriers are detuned with the Fine Control and panned hard left and right for a bigger sound.

The LFO goes to the (exponential) FM-Modulation Input to add a little bit of vibrato. Just as a reminder and to not get confused with all the FM-Labels:

Add a little bit of Reverb to this or a Chorus, Phaser, Leslie, Overdrive…

This is what happens when you make every input polyphonic. Every polyphony channel is completely independent from every other channel (except Wave and Stepping Selection). Here the DivSeq is generating a monophonic Melody, which is then multiplied with the first merge to 4 channels of polyphony. The different envelopes are merged into a polyphonic modulation for the VCAs (Btw: With the next release of Nysthis Plugin you can use the 4 ATT (SUS) REL for this, @synthi was so kind to add a polyphonic envelope out to that and his other multi-envelope-modules, so no more merge needed.) The 8vert is controlling the FM-Depth of the first three channels. The next merge is to get a Trigger on Channels 2-4 for the Sample and Hold, which is modulating the Ratio of those channels. Since the first channel is the Carrier and Channels 2-4 are chained Modulators, we just want Ratio-Modulation on them, the Base Pitch of the Carrier stays the same. An LFO for a subtle vibrato with the exponential FM-Input. And now the magic of using one channel to FM another. The Output is splitted and the output of channel 4 is routed into channel 3s LFM-Input. That Output is routed to Channel 2 LFM, that one to Channel 1 LFM and that one is finally our Audio-Output. For different FM-algorythms you could of course first mix the ouputs of the Modulators in any way you like and then feed them into channel one. Or use a 4 into 2, 3 into 1 configuration with 1 and 2 both as Carriers. Or a 4 x 4 Algorythm?

Stepping is Digitone-Style in this case, it gives you the gnarly 0.75-Ratios of nowadays. 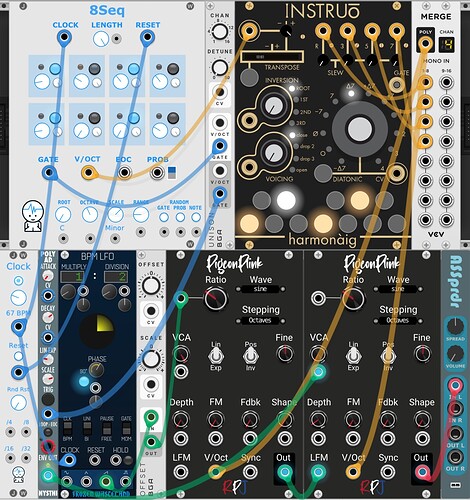 While waiting for the library update I made a few “Extras”:

The Choke-Function is great on the Percalls to unclutter your sounds. And I carefully programmed the beat with the HexSeq, slowly rolling my head over my keyboard… 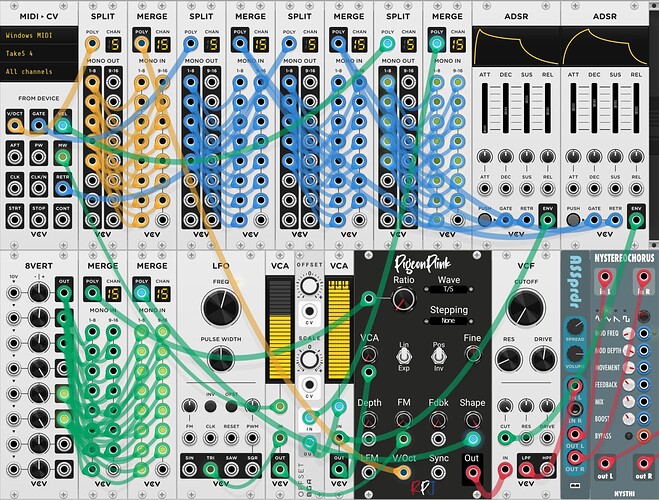 That’s all for now. I will add a few more infos later

Hope you have fun with those!

After all the time I spent trying to figure out how Neoni and other VCO’s implement FM, I still haven’t grasped the whole FM operator thing, and how FM is actually used musically. I think I need to study this VCO along with your patches!

Great work with this video and patches ! Thank you a lot for those. This operator is a beast, I had a blast just being there watching y’all develop the module. I am so happy that we now have at our disposal such a powerful FM experimentation platform !

Modulating the ratio with or without the stepping is giving super musical results, and having that polyphonic is so good ! You add a bit of waveshaping and sync and you have an incredible sound sculpting tool. Congratulations and thank you @robert.kock , @mosphaere and @Squinky .

So it looks there is an issue with some linux distributions causing Rack to crash when you add Pigeon Plink. I will send a new version to the VCV Rack team that has this fixed, but in the meantime I also want to look why our CPU usage is extremely higher than during our tests before submitting.

In case Rack crashes when you add the Pigeon Plink plugin, and you can’t wait for the fix to become available in the library, you can download a version from here:

And in case of issues, please raise them here: Issues · kockie69/RPJ (github.com)

I did check for CPU-Usage and it is not different to when we tested. I just forgot to add an Audio-Module to the patch. It is correct, that it uses more power than a kitchen sink. But just for comparison, I added a FM-OP and with four-voice-polyphony it is the same consumption.

Pigeon Plink (and Kitchen Sink) seems to have some kind of processing in blocks of 4 voices (is this the SIMD-Stuff?), so regardles of 1 or 4 voices it always uses the same amount of processing power. FM-OP scales with voices. I think all our polyphonic shenanigans are just hungry

but as long as it is comparable to the most-used Operator in Rack I would not worry too much. But it would be cool of course if there is some room for optimization.

I was also checking at the moment and didn’t see major differences. I thought it could have been caused by the FM-Input polyphonic we brought (back) in somewhere at the end. But I compared those versions and I didn’t see any major differences. Blocks of 4 is correct, that is indeed Simd processing 4 values in one step. I will have a look if I can find optimizations but will do in a later release and will need serious testing.

So I am thinking of uploading a new version to VCV again, but I want to be sure that issue with the file loads on Linux is fixed.

Sorry if this is a silly question – what is this .vcvs format? Rack won’t open it. 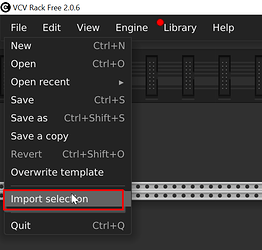 I just can’t stop jamming with this thing…

This is more or less a quantizer for incoming modulation via the Ratio Input. When you now connect a Sequence to V/Oct, every step is quantized within the Minor Pentatonic Scale of the current Note in the sequence. Now add polyphonic random modulation to the Ratio Input and you have a chord generator: 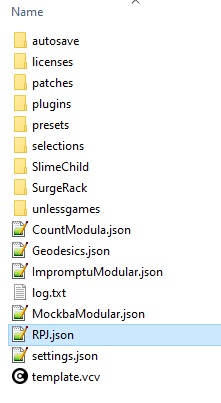 yeah, everything I’ve made in the last year or so used SIMD for polyphony, just like the VCV Fundamentals. So, yeah, the result is that 4 voices take the same CPU as one. To see some insanely low CPU number, try out BasicVCO with polyphony!

I’ve got a demo repo with a lot of info about how to do that: GitHub - squinkylabs/Demo: A collection of code and articles of interest to VCV users and developers.

I will have a look if I can find optimizations

I don’t see anything obvious in there. A few things I might look at: a) A lot of CV proccessing is done at full sample rate. Is that required? b) Have you measured to see if the time is being spent in audio processing vs CV processing? c) I notice all the ADSR from KitchenSink are still in this module, and they are clocked every sample. I imagine these could be removed if they aren’t used for anything

The E-Piano A classic 6 Operator-FM Patch

Wow, what an amazing sounding patch. This what happens when you really know about FM programming I guess

Gotta play around with this. I have a DX7 at the studio so maybe I’ll be able recreate some preset „concepts“ with this. I know there’s dexter from valley but thing seems more flexible for varying parameters slightly with every note to make it even more organic. 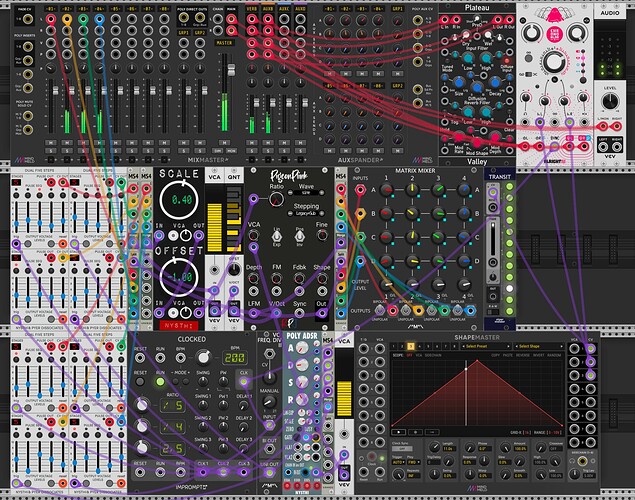 It has a different 5 steps (hence the name) sequence for each of the four voices, they all modulate themselves via a matrix mixer that is being slowly morphed by Stoermelder’s Transit (you’ll need that unofficial build for it to run), so that each FM voice changes a tiny bit over time and gets some level of dissonance, ratios are modulated by four other 5 steps sequences, triggered at a different speed than those that drive V/Oct, so that the actual note sequence (result of V/Oct + ratio, per voice) is longer than 5 steps. Then just a bit of rhythmic delay, and reverb, because well, delay and reverb. It gives the feeling that it repeats but not quite, I like it !

Possibly from the Transit? I don’t have Stoermelder installed and didn’t see any CPU spikes after playing around with the patch for 15-20 minutes. Since I don’t have Transit I added modulation with polyphonic CV from Caudal on the CV inputs of both VCAs which gave cool results.

Ok, I thought “yeah obviously, that must be it” but I tried replacing it with a 4x4 mixer with CV and modulation with tesseract : Pigeon Buchla V2.vcv (7.9 KB)

I have more or less the same problems…

Anyway, I need a faster computer.

One Pigeon Plink module and a few free drum modules. Perhaps a bit visually overcomplicated to set up 5 channels of polyphony for nearly every input on a single PP, but it was fun setting it up. Had I looked at @mosphaere 's FM drum kit example before I made it, I could have had all voices including the percussion come from a single PP module! 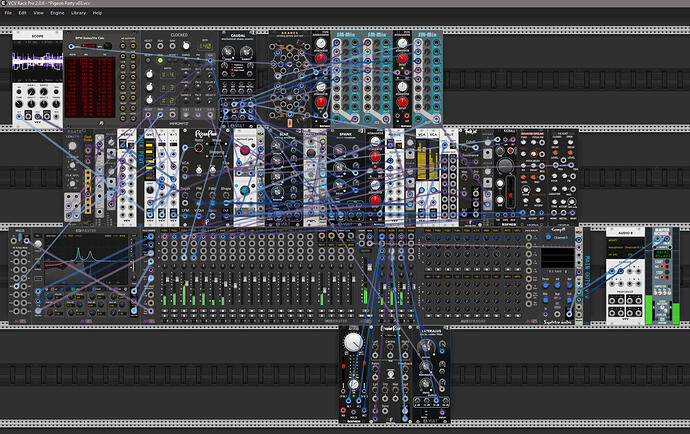 Well done, truly beautiful in some of it’s dissonance!

Didn’t know you could select so many modules to create a selection file. Wunderbar!

Thanks @ady34 ! The generative dissonance is partly from the switching complex to the left of the Pigeon Plink module. A slow clock is alternating the quantized notes and the output of that merge between PP’s ratio and v/oct inputs. The difference is interesting with unpredictable results depending on the Bogaudio S&H range and glide settings and the following Offset (but the offset is doing nothing in my recording). I suppose that stream could be quantized to particular semitone offsets for a more harmonious result, or made even crazier by plugging more polyphonic CV into the offset’s inputs! But I was happy to just let it rip randomly as is.

Yeah, the import/export selections feature is a quantum leap for VCV Rack 2.