Hey guys. I need a bit of schooling around playing oscillators.

Using qwerty to trigger the oscillator. The main issue I have is every note that is played on the keyboard does not change much in tone. Every note or key is like homogenous drone noise with a slight tonal difference. I am not getting key changes.

The second problem is when I have it set up like it is in the picture, a note does not sound every time. This seems to be remedied by sending the MIDI-CV into Entrian Melody V/oct and Gate, and then out to the oscillator and ADSR. However, I still get the homogenous drone issue and there is very little musicality to it.

Have tried with both monophonic and polyphonic output. I’m not even playing chords, just simply want the thing to play a different note or key.

Entrian Melody does a better job of offering tonal change. However, if two notes are over the top of each other in the piano roll, again a homogenous drone is offered up.

This is a real head-scratcher for me. I wondering if modulating the wave with another VCO makes it harder to get tonal changes, but this was not my experience with hardware synths. 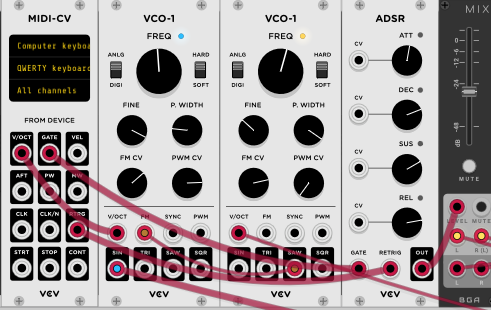 Ignore the V/oct on the second VCO it was only there for a second while I was trying something else out.

The default patch you get when you select new from the file menu solves these issues, I think. You need to use filters to change the tone, and adsr+vcv to stop the drone. Of course there are a zillion different ways, but that’s a very basic one.

I see. But the default patch is not the sound I want. So, when you mess around modulating oscillators to get the sound you want, you loose the ability to play them on a keyboard?

You are modulating the oscillator pitch too much and too fast, so the result will be non harmonic and won’t respond well to musical note changes.

Gotcha. Makes sense. I suppose if I make crazy sounds, the challenge is try and make them musical.

I evened out the frequencies on one of my synths and I got more pitch change.

If you want that sort of sound you probably want an fm VCO like FMOP or Kitchen Sink. You would probably enjoy some videos that show some techniques.

Thanks. I’ll check them out. I’m also wondering if FM synthesis is more for me.

There are a lot of different synthesis methods out there. Soon enough someone is going to recommend @Omri_Cohen videos. Search this forum and you will find lots of good suggestions for intro videos.

Ahhh ok. I’m getting it.

Yes, that’s the difference between exponential and linear FM. Linear is much easier to play “in tune”.

Soon enough someone is going to recommend @Omri_Cohen videos. 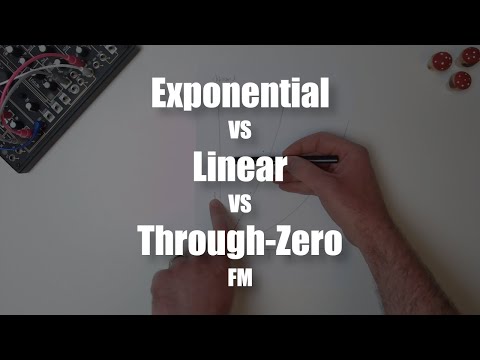 From what you’re saying I think your problem is that you are not handling polyphony the right way.

First check it in mono, set the MIDI-CV to mono, and then for poly check if every part of your synth runs with the same number of voices. What you are describing happens when you mix mono and poly signals the wrong way.

Forget all the other answers for now, they will just confuse you further, since they don’t address your issue.

The polyphony settings seem the way to go to solve the “second” problem. The one with the “silent” notes. Where I assume you get a note only every n keypresses.

Say your keyboard polyphony is set to 6, you might only get a note 1 out of 6 keypresses. It is then actually just playing a single channel (channel 1).

You will get this behaviour as soon when you try to patch a mono module as if it were poly. Generally the “ingoing” patch cable will then look “thick” (poly). But outgoing cables will be “thin” (mono). Indicating it can handle only 1 channel (implicitly channel 1).

Any subsequent module will also only reveive the 1 channel. Even if it is a poly module.

Thank you schabbes and Kwurqx. I will investigate this and get back to you.

also the “droning” problem… it sounds to me as if multiple channels of polyphony are playing, but only one at a time changes it’s pitch, meaning the VCO is poly but the VCA is mono and summing it’s input, so you hear all poly voices as a mono sound and only one channel of the poly signal is changing pitch when pressing a single note.