Hi everyone, I discovered scaleCV that creates a scale (eg: C Dorian, polyphonic output) and DiatonicCV that outputs the chord CVs with given index in that scale (I-VII).

So I’d like to get the index of my CV input (from midi keyboard) in a given scale so I can get the chord number of that note in that scale and play it.

Does anyone know how to do that ?

I’m not sure exactly what you want to do, but here is one way to use my PurrSoftware Meander module to set the scale mode and root and then play single notes on your MIDI keyboard and Meander will interpret the keypress as a circle of 5ths degree and play the corresponding chord. Of course it cannot handle you playing a chord on the keyboard.

It actually renders the chord properly on the musical staves in the upper right although that is not shown in this screen capture.

Edit: You actually play only the white notes on the keyboard with C being interpreted as degree I, D as degree II and so forth. 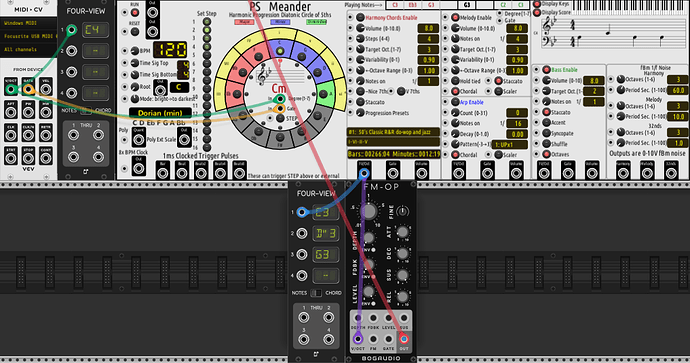 In Frank Buss Formula I plug the CV from the keyboard into the W input. In the formula I multiply W by 0.5/(1/12) and uncheck the clamp button. Hope this is what you looking for.

Tomorrow I will release a tutorial in youtube about the matter of these modules but I didn’t remember they exist. Too late 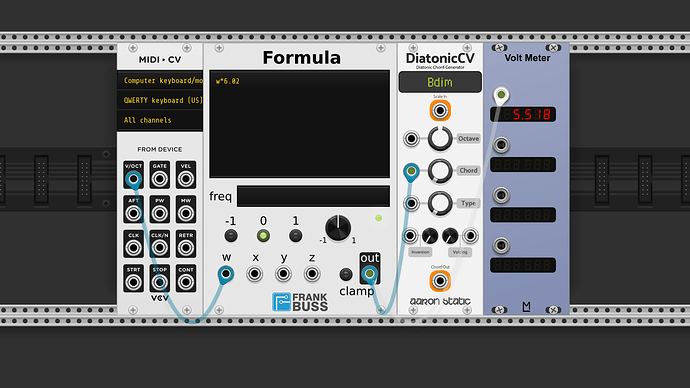 n Frank Buss Formula I plug the CV from the keyboard into the W input. In the formula I multiply W by 0.5/(1/12) and uncheck the clamp button.

If you have not tried out Meander in this mode, you might find it interesting. With Meander, you are not limited to one octave of chord degree control from the MIDI keyboard. Also, As you play degrees on the keyboard, Meander will play the corresponding chord as well as add melody, arpeggiation and bass to that chord, all in the same mode and root scale.

Meander can export the scale to Grande Quant if Meander is set correctly from the contrext menu or external modules can send their v/oct notes to Meander for quantization to the set scale.

And, if you want, you can control both Meander and the Aaron Static DiatonicCV modules at the same time from the keyboard, once you set the scale and root to match in both Meander and Scale CV and DiatonicCV but the DiatonicCV control will be limited to one octave of control. Doing that allows the DiatonicCV module to play the chords but allows Meander to do the melody and bass accompaniment. The Aaron Static modules are very nice also from a music theory standpoint. 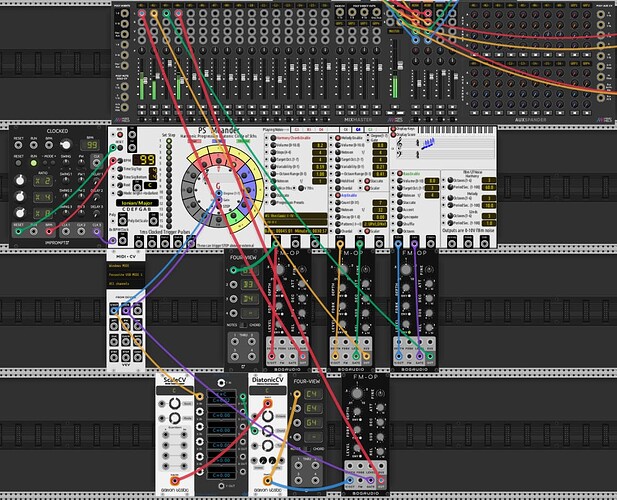 While not what you are asking here, be sure to check out using Meander as a chord quantizer. Simply connect a poly chord (such as from MIDI-CV module" to the Meander “Poly Quant” input and send the Poly Quant output to a poly sound generator (such as FM-OP). Whatever keys you play on the keyboard will be quantized to the current Meander mode and root scale. These chords will always sound good since each note is being quantized to the scale, but it will not sound as good as a chord quantized to the correct circle of 5ths degree because in Meander, for Cmaj scale, for example, the I, IV and V chords will be quantized as major, the II, III and VI chords are quantized as minor and thus notated as ii, iii, vi and the VII will be quantized as diminished and notated as vii with a o superscript. All of this is per common practices.

You can set Meander to an Aeolian minor mode and be able to play some notes as minor as they are part of the scale. 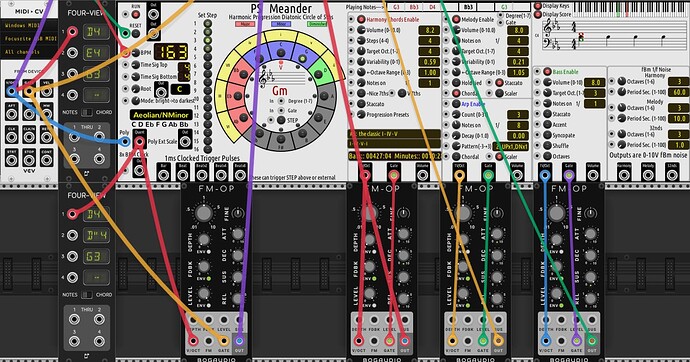 This is exactly the question I came researching today. Excellent options from everyone–thank you!

@hugo-simon.france --I’m curious–what did you end up doing? Or do you have any thoughts to share with regard to things you tried? I’m trying something similar–I would like to index the DiatonicCV using pitch somehow. I will also investigate the Meander as well… Thanks in advance for anything you might share.