how are we doing with bpm-detectors in vcv? had this idea to live-cut-up an online radio which had new songs every 4 minutes. it could be a nice creative tool even though live bpm detection is a bit a mess/hard to pull off, isn’t it? I had to resort to tap tempo in ableton live for each new song which took me 2 minutes at least to get perfectly right. then I went online and lo and behold there are very little options out there, and most seem to not be worth the trouble, too imprecise, and none of them can adjust the tempo of a daw-software like ableton or logic, you name it. anyone around here touched this subject already?

Possibly using an envelope follower to fire off a trigger into a tap tempo input on a clock module on either start or end of cycle would work but only if the transients aren’t too busy. Literally just kick or hi-hats would be preferable, but you’re probably better off just googling the bpm of the song you’re trying to match

ShapeMaster’s side chain input is made for this stuff. You can use the filters to isolate the kick frequencies and with hysteresis, hold off and sensitivity controls you should be able to get it to trigger on the beat (or even better say kick and off-beat snare). Make it trigger a simple gate shape (or two) and away you go.

One advantage of ShapeMaster over regular envelope followers is you get visualisation with the built in scope and trigger threshold line so you can see what’s happening and when you’ll get triggers. 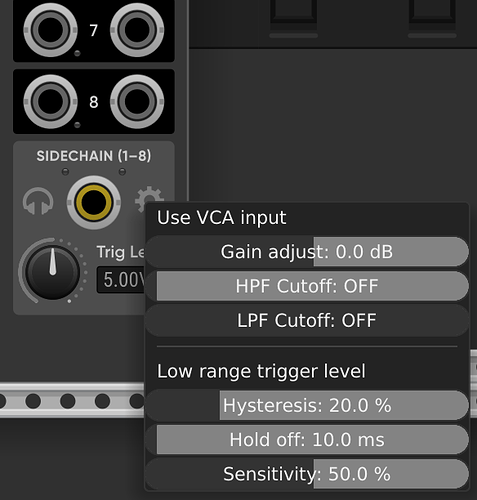 I think that this would be a wonderful stand-alone module. I have a pretty full plate at the moment, but if nobody picks it up for a while, I’ll see what I can do!

sure, if said radio would play old stuff mostly, but they play stuff that has not been released yet or is about to be released, and I want to mess with it

at least this was the first impulse.

native instruments built a whole software suite around the concept of tempo analysis but since they are germans it all happens offline (you analize bpm before you play your sets with NI traktor) but what’s the fun in this, the reality is there is no decent bpm detector out there, and source material is challenging if you have odd meters, most are doing fine with 4 to the floor though, but none is able to adjust master bpm of any daw, and in vcv nothing is able to adjust a sequencer’s or lfo’s clock with such a module, would love if some codemaster jumps on this

cool, will mess around with this, shapemaster keeps intriguing me, I got the pro version and apparently I don’t know how deep it goes yet

Beat detection is a classic “hard problem”. Much has been written about it. But for simple source material, or if lots of errors are ok, then simple techniques work.