Question for developers.
I had opened a feature request for “Module Bypass” at the VCV Rack github.

Now that we have “Disable Module” i find it hardly useful since it also breaks the signal path flowing through. Instead it would be much more useful if the signal is passed on from input to output of the disabled module.

Either optional by menu (thus keeping both) or replace the Disable feature with Bypass.
I’d rather have both, same as in for example Reason where the switch adds 2 options: Bypass / Off.

The answer i got back was:

Obviously not generally possible. It can be implemented per module by the plugin developer though.

So is it possible to create this feature on module level, where the “disable” function could be handled as a bypass, turning off the module and passing through the input signal to the output connection unaltered?

edit: I forget to mention that this only applies to input/sound processing modules.

Blamsoft has this on their Reverb and distortion modules, and I have found it can be useful in some cases. 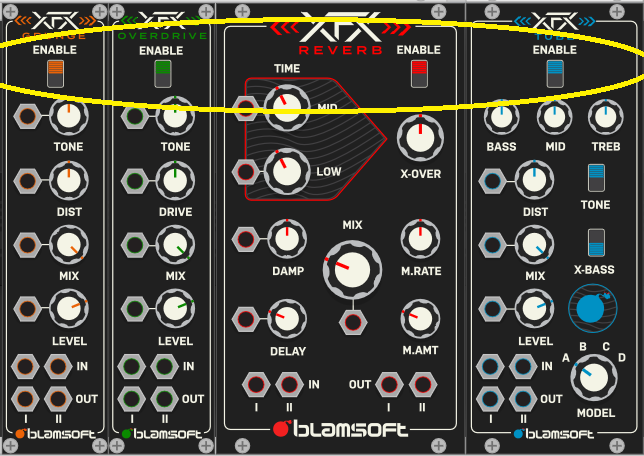 Thanks Marc, indeed they have.
That is sort of what i mean.

So you want to encourage more devs to add switches like this then, correct?

Yes if possible that would be very useful.
For when trying things out or temporarily relieving cpu strain (if that was the case), without breaking the signal chain.
The disable function as it is implemented now, serves a different purpose i think.

I agree that a right click menu Bypass option would be terrific. Pass signal without processing. All outputs become mults of the input signal. Cleanest approach since it wouldn’t require additional GUI space on the modules themselves. If a developer wanted to add a Bypass with a control on the GUI of the module (for example, if they wanted to allow bypassing via gate signals and had a corresponding input) then they still could.

I know that you like phasers and choruses with one knob and a gioconda, so mines are unnoticed

let me put some funny faces

It would be very useful if the VCV API had some way that a module could say “I support bypass”, and then VCV could say “ok - bypass yourself”.

That’s quite interesting. the github issue says " As a trial, I’ve added void configBypass(int inputId, int outputId) to Module". But I don’t find those words in VCV’s source code. Was the feature renamed?

I see the word “bypass” in the source, but it’s not clear to me what this is. @stoermelder, are you saying this feature is in VCV somewhere? I would support it - I’m putting a bypass function into a new module.

I’m putting a bypass function into a new module.

…and in the old ones please

I see the word “bypass” in the source, but it’s not clear to me what this is. @stoermelder, are you saying this feature is in VCV somewhere? I would support it - I’m putting a bypass function into a new module.

Vult has a Bypass module. n Works great. It is the first thing that comes up if you do a basic search in the library.