I feel like I must be missing something, but I can’t figure out what.

Using MixMaster, the poly direct outs for 1-8 (I’m using Jr) are pre-aux. Make sense. The Grp/Aux outs are (logically) post-aux. I can verify that by running The Grp/Aux poly out to Audio-8 - I hear effects, there. But sending it to (in my case) PolyRec produces WAVs with no effects.

In my head, that’s an issue with Polyrecorder, but how can it be stripping effects from the signal?

And there’s a huge possibility that I’m over thinking this. I’ve been playing with this for a while and I’m frustrated.

Anyone have any thoughts?

maybe you need to adjust your setting in Polyrec

so it can be that Polyrec only records channel 1 and 2. you can use the VCV split module to listen to seperate channels and investigate what`s going on.

I think it would help if you could post a grab showing how you have things patched up?

In other words, at no point do you get a ‘post-aux’ track recording that combines both the dry signal with added effects (a synth line with reverb added for example). In this example you would get the dry synth track recording, and another track recording for the return from the reverb that will include the synth reverb in it but also the reverb returns for all the other tracks that you sent to the reverb - hope that makes sense!

It can help to use our UnMeld module rather than VCV split to see what is going on as the 16 poly channels are labelled as L and R stereo tracks and it has different background SVGs (selectable from right click menu) for the 1-8, 9-16 and Grp/Aux poly outputs.

That helped. The issue was indeed Polyphonic Recorder. Not that there’s anything wrong with it. It’s just that it’s 8 channels. With the AUX starting at 9, it was never making it to the recorder.

Thanks so much for the help, guys.

And, Steve. You’re the guy behind MindMeld? Bravo, man. Your modules are spectacular.

Ah you need the Nysthi Polyrec64 which has 4 poly inputs (64 channels!)

If using with MM Jr you can hook it up like this: 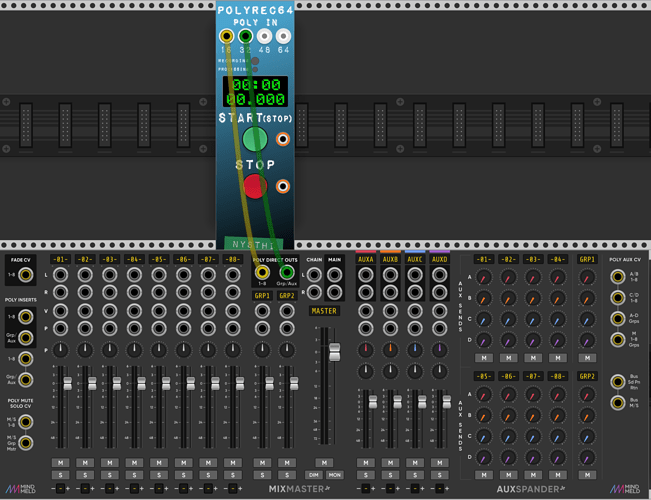 Thank you for the kind words about MindMeld

- MindMeld is a collaboration between me (concept/design) and Marc Boulé (coding/development) - Marc is also the developer behind Impromptu Modular (his own) and Geodesics modules (in collaboration with Pyer).

Bravo to Marc, too.

MindMeld is a collaboration between me (concept/design) and Marc Boulé (coding/development) - Marc is also the developer behind Impromptu Modular (his own) and Geodesics modules (in collaboration with Pyer).

A little off-topic perhaps, but between MindMeld, Impromptu, and Geodesics, I think you guys are in every one of my patches!

I am looking for the same thing. I LOVE MixMaster, it is by far the most comprehensive & “familiar” VCV mixer I’ve come across. But I am trying to output each channel POST EFFECTS to a dedicated channel in Reaper. The direct outs work perfectly, but yeah; they’re dry.

So, my question is just looking for clarification @steve - are you saying there’s not a way to get a wet track sent out of MM by itself (only as part of Group)? I figured since you can Solo a channel with fx, the signal must be somewhere, but now I reckon that you’re soloing the fx SEND, so a bus would appear to be an isolated track…

Does this not answer how to get the wet signals from the send effects?

So, my question is just looking for clarification @steve - are you saying there’s not a way to get a wet track sent out of MM by itself (only as part of Group)?

- probably not what you want though. One way is to use the main out rather than direct outs and just record one track at a time (mute everything else) - that will give you individual tracks with their aux FX baked in. The downside is you are not multi-tracking.

Another way is to not use send FX at all and instead use all FX for each track inline before the mixer - that let’s you multitrack with FX for each track but the downside is you will need a lot more FX modules (each track you want to add reverb to will need its own reverb module) and therefore more CPU.

What you can’t do is isolate a send effect (like reverb), back to its individual source track because… that’s not how sends work.

When you send from a track, you are first sending to a stereo aux bus (like a submix), with its own level control. This stereo submix (which is a mix of all the track sends sent to it) is then sent out to the effect. The effect processes that submix and returns the processed mix back to the aux return inputs.

Point being, the effect (like reverb) is added to the entire aux bus mix. It is not added to tracks individually, therefore you can’t get the track plus its isolated effects from the direct outs, or anywhere else (unless recording one track at a time).

Even if we could make the aux bus poly, rather than stereo, and the effects used were themselves all poly, it still wouldn’t be possible as poly is limited to 16 (mono) channels, and the large MixMaster, with 16 stereo tracks and 4 Groups would require 40 poly channels per send effect. This is why MMs poly inserts and EQMaster require 3 x 16 channel poly jacks. Even MM Jr with 8 stereo tracks and 2 Groups would require 20 channels per effect. And even if it was possible, the CPU hit would be massive and therefore you might as well just use the effects inline anyway…

It does, but the wet signals are bussed (per fx return), not per channel.

Thank you @steve , I totally get it now.

Again, awesome work, and thanks for your detailed and generous replies.