I’ve tried Frozen Wasteland’s MIDI Recorder but that seems to create a single “track” of MIDI with some not obvious behavior (connecting sequencer v/oct to “note” CV and sequencer “gate” to the polyphonic “gate” CV does not seem to generate anything like the source notes). I’m guessing “Note” on the module means something other than what I’m trying to do. The user manual is not clear, and I’ve not yet tried to grok the source code…

@Squinky’s Seq++ seems to work a bit more like what I want - I see what looks like proper note and gate timing in the resulting MIDI but everything is on one track, but I was hoping that each polyphonic note could end up on a separate MIDI ‘track’ - don’t see how to do that with Seq++.

I don’t see any other likely modules that might let me do what I’m trying to do (one channel of v/oct / gate becomes one “track” of a structured MIDI file). Help?

Maybe not what you’re looking for, but outboarding the MIDI recording entirely might be a way to address those performance issues: MIDI Tape Recorder captures expressive MIDI perfectly so that you can be creative.

To get it clear:

If you want to record the MIDI events, AFAIK I’m afraid this is not possible in VCV.

What do you mean by “DAW-based instruments”? VSTs or instruments that come with a specific DAW (like the instruments in Bitwig that are not VSTs)?

What DAW are you using? What OS are you on? What are your hardware specs? Maybe choosing a more lightweight DAW can solve your problem.

Why not just record the midi in your DAW?

I just tried this exact thing on one of my systems: 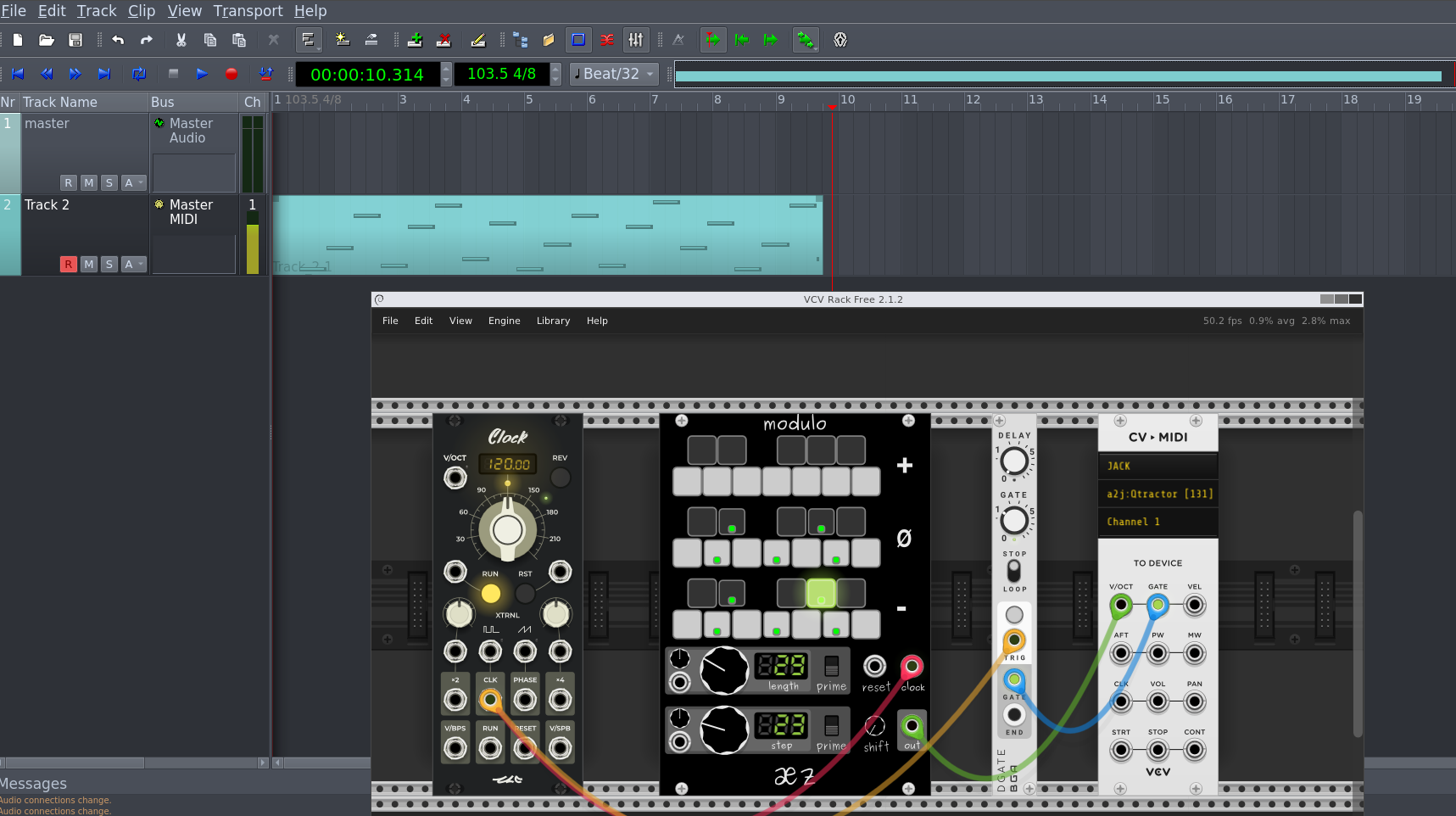 This might in fact work for me. I’ll give it a try.

I have no philosophical objection to an outboard recorder (in my ideal world **, I’d just record directly into my DAW, but running both Logic Pro and a moderately large Rack patch on this laptop at the same time is a recipe for crackles and pops). This alternate recorder may coexist with Rack better than Logic does.

** well, in my ideal world there would be an AU plugic version of Rack Pro and I’d just run Rack directly from Logic

The basic workflow is:

I’m using Logic Pro on a 2015 16G macbook pro. When I try to run both Logic and a moderately complicated Rack patch at the same time, I run into problems. I’d guess that some of that could be helped by disabling the audio related modules in the Rack patch while recording MIDI events in Logic, but was hoping for a less messy way to siphon off the note events as a SMF MIDI file without having to alter the Rack patch too much.

I may have misunderstood your need but using VCV module named xx to MIDI (cv, gate) will allow to send MIDI to your DAW. In another track in your daw, where the VST are located, set it to take MIDI from the other track or from the MIDI channel set in VCV.

I did such thing with Ableton: Using VCV vst in a track with a turing machine and additional module (shift register, quantizer, gate length) and made another track to get MIDI from it.

then standalone version sending MIDI on a channel and Logic taking MIDI from that channel can work ?

It should be possible to send MIDI from Rack standalone to any DAW. AFAIK on Mac you can do this out of the box. On Windows there’s LoopMidi, on Linux there’s Jack.

Yes - functionally, it works to stream MIDI straight to Logic Pro – my problem is that I’m running close to the limit in CPU on this laptop when I do so – as soon as I hit Play or Record in Logic, Rack audio starts crackling and popping (and so I fear for timing related issues in the MIDI stream). I might be overthinking it. Will experiment some more.

How many CPU threads do you use in VCV Rack? How large is your audio buffer?

1 thread, 44.1kHz sample rate. Was running with a buffer size of 256 - I’ve bumped that to max (4096) and as you’d predict, it works better. (though still getting drop outs when play/record from Logic). Thanks for prompting me to change that!

I would use half the threads your CPU provides for VCV. Logic will grab the other half.

In my example I used jack, but could’ve just as easily used alsa (or rtpmidi to some other computer on the network

For whatever reason, even without Logic, I find 1 thread the only way to run VCV on this laptop (an i5 with 2 actual cores - 4 if you count hyper-threaded virtual cores). If I set Rack to 2 threads, even just playing to audio with 4096 buffer size - no MIDI processing; Logic not running, I get audio breakup.

With only 2 cores, it doesn’t make sense to run VCV on 2 threads, because there will be nothing left for Logic.

I’m afraid, you will need a stronger CPU for your purpose. You could also use 2 machines, one running VCV and the other running Logic, connected by MIDI.

I’ve been interested in this question too for awhile, but haven’t actually had a strong need to do it. Regardless of the reasons for doing so, is there a way save sequences into midi files directly from VCV Rack? With Squinky SEQ++ I can’t figure out how to get it to do what I want, although it seems like it might be possible. Frozen Wasteland Midi Recorder apparently doesn’t save CV notes. The manual says it’s for recording gate events. Perhaps I’m using them wrong. Entrian sequencers can import midi but I don’t see any way to export to a midi file. Are there other modules that can export/record to midi files?

The patch shown here is just one of many attempts that yielded similar results.

After running the sequence for a bit, I saved their midi files and imported them to Ableton.

I asked a similar question a while back (using reaper and VCV.vst), just in case it is helpful:

Wow! Thanks so much everyone! I am well on my way! I was definitely missing the Record: Output thing, @main.tenant - thanks for that!. I swapped that over from Input and have a beautiful stream of midi coming from VCV. I am sure you’re right about splitting Trigger & Gate, @rsmus7. Thanks, all, for taking the time to help a brother out. Very much appreciated!