I have created a video about using TouchOSC with VCV Rack. It is not my first tutorial but it is the first to use both live camera and OBS studio. I struggled but I think this turned out pretty well overall. I hope this tutorial can help someone who wants a midi controller but has not bought hardware yet.

The patch and the TouchOSC layout that I created are here:
https://patchstorage.com/touchosc-vcv-rack/

I love this community and the opportunity to create and share.

Yeah! I’m about to finish my first patch with this funny tool. It’s really cool since you can do a different cockpit for each one…
Thanks for sharing.

Here is a link to an OSC Touch layout (VCV Rack Console) I made for Ipad:

Hello, Nicola, thanks for the clarification. I had already made a TouchOSC template for VCV Rack before and forgot that in the TouchOSC editor a channel number must be specified for each control. Inspired by you I updated the template “VCV Rack Console” and created a corresponding patch with MIDI-CAT, see appendix. Loading is done via the “Stoermelder” “Strip” module. Maybe someone wants to use or test it. (The appendix “.txt” on both files must be deleted) VCV-Rack Console MIDI-CAT.vcvss.txt …


And if I can recommend something, then use the Stoermelder MIDI-CAT Module and not the VCV MIDI MAP Module. I have already described the reason here:

Hi there, this is great and a good opportunity for people with a pad, thank you. I would like to make a small suggestion. If you use the new Stoermelder MIDI-CAT module, then Touch OSC takes over the position of a button if you change the button position in the patch, and especially if you restart TouchOSC or VCV. I saw this today in Artem Leonovs video, thank’s Artem. I tested it, and it works very well also with your patch. But what I didn’t understand is why is it working only with channel 16…

Thanks @Icet. Artem suggested the MIDI-CAT this morning and I do like it. I have already switched to using it. I must admit that I did not know that it existed.
Your layout for the VCV console is very cool. I like the idea of having a console and map preset as a strip to load. Awesome productivity.
For me, saving the midi-cat as part of the template works very well.

It is amazing that after creating a tutorial, I am taught many new things by this community.
Thanks again.

That’s the thing about this community. Everybody seems to help everybody if he can. 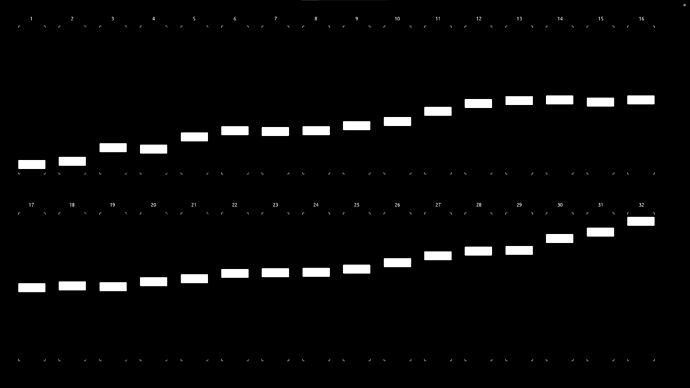 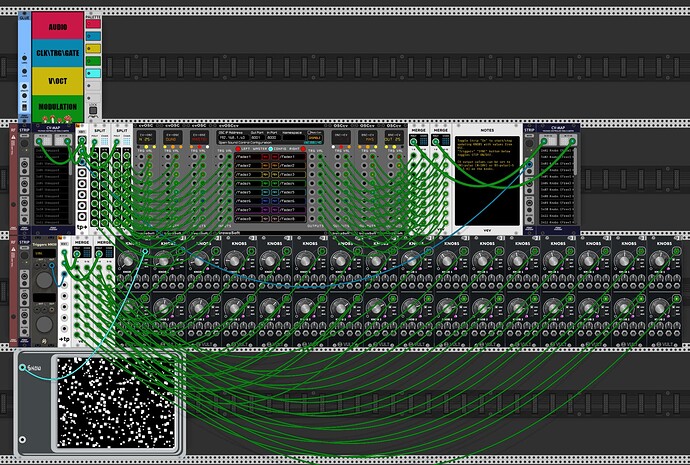 The top right CV-Map can be toggled ON/OFF to lock/unlock the KNOBS to the [Touch]OSC input. I left the top left CV-MAP unmapped - it can be used freely.

Also, the 32 KNOB outputs can be used to control CV inputs.

Another OSC controller is https://openstagecontrol.ammd.net/, it serves a webpage with controllers to clients, that lets them control via OSC - I tried it, but prefer TouchOSC.

I have asked hexler to open up the .tosc file format or to use .json instead. That would allow vcvrack generated TouchOSC screens.

Here’s the answer i got from Hexler.net support:

In the most recent beta update, there is now an option to Export XML . This will export the layout in a readable format, that can be loaded into TouchOSC like any other layout, so patches raw code can be posted on sites like GitHub. On the desktop version, this can be enabled by going to Preferences > General > Updates and changing the Channel from Stable to Beta , and then when you click the refresh button it should say there is a beta update available. This feature is also available on mobile but as the beta channel is not publicly available, the feature will get pushed to the stable release after we get some test feedback from users.

This has been requested by users, it just needed a bit of implementation to give them access - which now exists.