I have a Casio CDP-S100. Its a full size digital piano. Would like to control VST instruments in Rack, but I’m hitting some snags.

CV and Gate from MIDI-CV to HOST works fine. However, I am confused how to get velocity and sustain pedal information into HOST (VST).

I am using Spitfire Audio Soft Piano right now in HOST. I am assuming this plugin can recieve sustain midi information.

MIDI-CV automatically holds gates open at the GATE output when the sustain pedal is held. Normally this is very handy, but not so much when using a piano vst in HOST or in any other situation where there is a difference between a note being held via key versus via pedal. MIDI-CV also lacks a discrete sustain output (though you could make up for that with MIDI-CC).

To get around this, instead use the module MIDIpolyMPE from moDllz. This MIDI-input module has a “Sustain Hold” switch which can be turned off, letting note gates end as soon as the keys are released even if the sustain pedal is held. It’s also got a built-in sustain output (along with 7 other configurable CC outs). A basic setup looks like this: 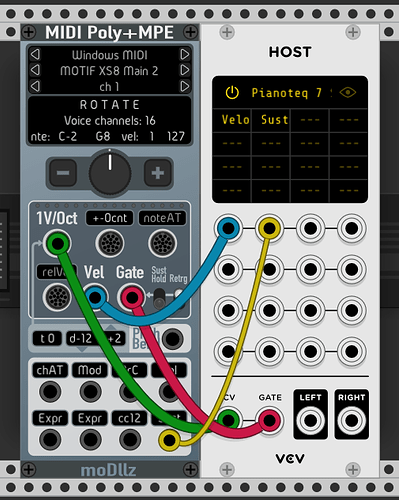 To configure the inputs on HOST to “Velocity” and “Sustain”, right-click one of the boxes on its display.

Much appreciated. I shall give it a whirl.