MIDI-CV: All notes off

Is there a way to send an all notes off or panic message via midi to MIDI-CV? I have a problem with hanging notes (not caused by Rack) and I would like to be able to turn everything off via MIDI.

I would be thankful for any tips.

Yes right click the panel and it is the option at the end.

Not via midi that I’m aware of.

Too bad! Thanks for replying though.

there is a multi-platform command-line tool named “sendmidi”

I think it is not required to install it, just copy somewhere on a folder into a pc and run it, in this specific case I should write:

I dont’ know if coding gurus here can make the operating system do something like that within VCV Rack, in that case you could assign a button ecc…

this tool is very easy to use, i.e. to set up something in a midi device without opening for example the official “app” of it, I discovered this command-line tool when I needed to change the pitch bend range of a controller

How easy would that be to type in a state of panic?

I was just wondering if it is possible to execute on the operating system a command like that from a button on a VCV Rack’s module.

Then I could map that button on the module to a pad on my midi device, so, when the problem occurs, I push this pad…and that’s it

the command is simple:

I think here we have the source code:

@blkww some midi devices have a keys combination to send the message “panic”, have you taken a look to the manual?

It could be entirely possible to have this on a module with a button where the module could be set up to receive a midi message from a controller without resetting the device, without testing this I couldn’t say for sure if it would work though.

@ale47p yes I can send the all notes off message (I think its CC 123) but the problem is that the module doesn’t respond. Was kinda hoping, but no.

But in the end I put Hot Tuna (the tuner) on the CV so I can easily see which note is hung. Then I just tap it again to send the note off message. Works for now.

Select Panic from the context menu to turn off all notes. 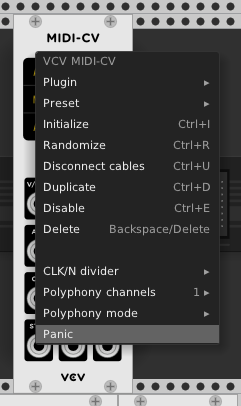 If you’re asking if it’s possible to turn off all notes via MIDI, yes of course. Just send MIDI note-off messages via MIDI.

@Vortico I was trying to send an “all notes off” message, which is part of the midi spec.

This is different than sending a simple note off because you need to know which note is left hanging without a note off for this to work, which can take a minute.

Not really a serious problem for me, though, was just wondering if it was possible.

Forgot about the MIDI message. Added to MIDI-CV and MIDI-Gate in Rack v2.

Wow that is awesome thanks!!!