Hello everyone, I hope you are doing well! I am trying to figure out how to make some scratchy / noisy controlled sounds like the Landscape FM Stereo Field, since I don’t have the money to buy one! That which is I am referring to are the sounds in the first 10 seconds of this video: STEREO FIELD (non-talk version) - YouTube

Does anyone have any idea or knowledge that could help me?

My first impulse would be to use Befaco Noise Plethora and randomize the sound with each trigger, using a sample and hold modules output to modulate the selected mode and paramters of the noise.

Something like this: (press the button on the Bogaudio Switch right next to the clock to play it)

But to get the exact same sound might be quite dificult.

That is pretty nice, but it is rhythmic, I need something totally random and without rhythmic, I’m going to play around to check it out, thanks!

totally random and without rhythmic

Modulate it with Vult Caudal?

Check out the HetrickCV chaos modules. They’re a set of random signal generators that can make all kinds of glitchy circuit-bent-sounding noises. There really isn’t anything quite like actual bent hardware though. If you want something that sounds like the stereo field but on the cheap, look into circuit bending fuzz and amplifier circuits. The ISD-1820 chip is a cool little chip that can either be a very lo-fi sampler or a distorted mic preamp that can be circuit bent.

Check out the HetrickCV chaos modules.

Thanks for the shoutout!

I used to have a Stereo Field. In addition to noise and chaos, you’ll want to add a few bandpass filters to the mix. Do something like Noise/Chaos->BP Filter->Output, and create a few instances of that in a mixer. You’ll want to do a lot of feedback patching between all the “voices” (especially modulating the frequency and resonance/width of the filters, depending on which one you use).

Noise Plethora is a great rec since it has noise + filtering + lots of CV all in one. Just take the two outputs and runs them through VCAs. From there, you’ll want some playable method to raise the gain on the VCA. 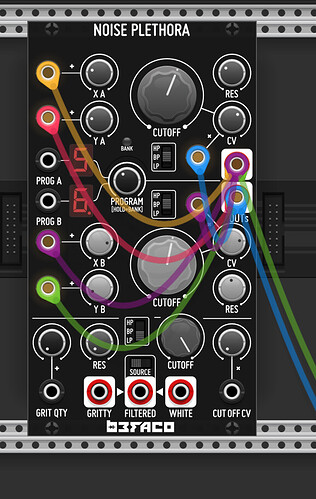 If you want to get extra hairy, use two Noise Plethoras and link them with lots of switches, like this: 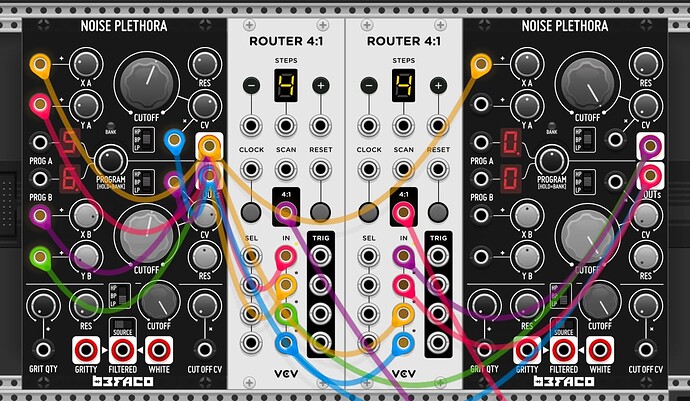 That way, you can simulate the way that the Stereo Field responds to changing the signal path via touch. I have the two outputs of the switches going to out L and R. Modulate the SCAN ports on those to change the active paths.

Finally, if you want an effect (like how the Stereo Field processes external sound), plug the signal you want into filters and use this noise patch to modulate cutoffs. I remember there being some panning elements of Stereo Field (I never got terribly deep into it and sold it pretty quickly…) but you could add some panners that respond either to playing or modulated by noise. Lots and lots and lots of options!

Wow, thanks a lot! That is so helpful! On another note since you seem to pretty much to understand what is happening on the Stereo Field to a degree: the reason I went after it is because I saw Thomas Ankersmit perform live with Serge Synthesizers and the performance had that kind of sounds so I wanted to see how I could produce them. Specifically I am referring to the sounds from 1.01 - 1.25 in this video: PERCEPTUAL GEOGRAPHY | THOMAS ANKERSMIT - YouTube

I would like to know your opinion on it, like if it’s basically the same techniques with noise / feedback generated stuff! Thank you!

Nice sounds! In general, he’s using a bunch of slow modulation sources to interact with the noisier components of the patch. As a starter, you can hear a slow LFO modulating one of the layers back and forth across the stereo field before the timestamp that you mention.

His sounds are quite different from the harsher sounds of the Stereo Field. He’s using a juxtaposition of high frequency drones with sudden low frequency hits (along with some clicky stuff). For the sound at 1:01, you can hear a low frequency sine combined with some rapid transients. The rapid transients on top of the sub might either be some triggers/gates or very short AD envelopes. Since they’re launching together, I imagine that he is mixing the two sounds sources together before running the mix through a VCA.

In general, I’d look for modules based off of the Serge designs. As an example, the Befaco Rampage is extremely similar to the Serge DUSG (Random Source Serge DUSG Slope Generator - Perfect Circuit). The SSG (Serge Modular for Eurorack (3U) by Random*Source) is another module that is a very popular as a modulation source in the format. I can’t think of a direct, single-module replacement in VCV, but you can make similar things using slew limiters and sample and holds.

Also, quick edit, be sure to check out all the modes on the Noise Plethora, and read the manual to find out the recipe for each mode. Some of the sounds in this video are close to some of the various modes in the NP.

I’ll be honest, nobody except the designers of the Stereo Field really know what it’s doing. I do know that it’s using a series of touch plates that are wired to various points of a stereo amplifier (I think it’s an amplifier) circuit, allowing you to short and “circuit bend” those points together with your fingers. Bent hardware like that tends to be very very unique and hard to recreate.