Looking for other developpers (quadraphonic plugins)

Hi, as said in the title, i am looking for other devs, to look at a new set of plugins… quadraphonic oriented… i have made the shematics, ui design and various code testing… but it is much more fun to work in collab… let me know if you are interested… have a nice day
uriel

Perhaps take a look at How polyphonic cables will work in Rack v1. Quadrophonic will still be useful but a bit obsolete.

thanks, i ve looked at it… but why you said quadraphonic is a bit obsolete ?

So it’s a matter of how often people will be using poly cables vs. a set of four cables to carry their quad signals. The advantage of poly modules is that you don’t have to work with a fixed number of channels (4). You can work with between 1-16.

is this quadrophonic as opposed to stereo?

I’ve been using nysthi quad panner for this, would be interested in other modules too.

no, it is 4 mono setup, with independant controls

I am actually working on something (using an algorithm I wrote for another purpose) that has multi channel input and output. May I ask what you are planning to do?

yes sure, check my github pages

Just had a look at https://github.com/KoreTeknology/Quadraphonic-Plugins-for-VCV-Rack . There is a certain overlap with what I am planning to do - so it is interesting. I have also extensively worked with quadrophonic (or more precisely dual stereo) audio in another context. Please let me ask you:

So for a 4X4matrix you need four four dimensional vectors rather than 16 separate values.

My naivete dictates that a quad panner’s “panning” component would be controlled with an X/Y pad, although this assumes each speaker is surrounding the listener.

Yes, if you look at it this way the 2D pad defines the parameters of a so-called bilinear function that computes the four panning coefficients. As for speaker positions: As long as they are placed in such a way that they form a non self-intersecting quadrilateral, pad parameters can be transformed by an affine transformation.

hi hguys, thanks for your answers… i did try most of the devices used in this kind of confifg… but as i wrote the patent before, and i have experiences in live performance with this , i would like to keep going in the same direction.

of course, if there is anything new, i would try and keep any new effects… thx

here is a simple setup with only one input > 4 outs, with LFOs to move the sound in space and reset sync to bpm… 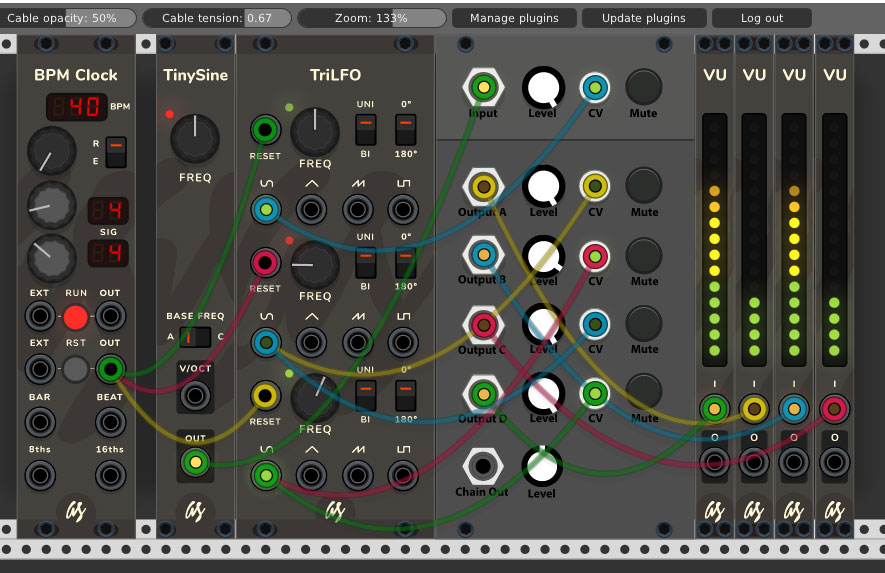 Why not Nysthi’s Quad Panner?

i know what you think here, it is not the way i do quadraphonic mix… i want to control independently each input and each output via automation sequences, for precision placement and motions. more than the buchla can do, i can create very interesting effect with this.
i tried for the last 20 years all kind of devices to allow me to mix my musique in quadraphonic system… and the only one who works for me is this way… but thanks for the advice anyway.

also, on this version, i have a chain output, to be able to mix surround in octophony or more, depending of the installation