Looking For a Slim Vertical Meter, No Ballistics

I’m looking for something with the dimensions and orientation of the NYSTHI Single Slim VU Meter which is handy for a lot of things besides audio, but I’m hoping to find one that behaves like one of the ten meters in NYSTHI GraphicMeter, for CVs and such

No VU ballistics, no RMS timing, no non-linear transfer function, nothing like that. Just have the height of the bar be directly proportional to the signal level.

With, say, a steady 5V input, the Single Slim VU Meter is pinned. On an AS MonoVUmeter, 12 out of the 15 dots are lit. Both of those do their own jobs and do it well. On the NYSTHI Graphic Meter the green bar is exactly half-way to the 10, which is good, but it takes up a lot of real estate if you want the meters to be immediately next to the module you are monitoring.

Some of the optional modes in NYSTHI GraphicMeter (“unipolar” and/or “absolute values”) are nice though.

For now, I’ve been using “Single Slim VU Meter”. The Peak Hold bar is somewhat useful for monitoring triggers too.

Is there a meter that does all this already?

Not really a VU meter, but the Fundamental VCA, on the cv mod input?

exactly what I would recommend

Hmmm. Not bad. The VCA/CV display does behave in somewhat the way I have in mind, in that it has a linear response. BUT…

Is this what the call “feature creep”?

I’m not sure what you mean by “feature creep” in this context, because my wish is for a less sophisticated meter. Unless you mean that the existing meters have too many features that cannot be turned off. Then yeah.

As far as the notion of using the VCA for a meter goes, I’d call that “emergent gameplay”.

Something like this is what I think you’re after:

Or indeed this, as yet unreleased, VCV version of it: 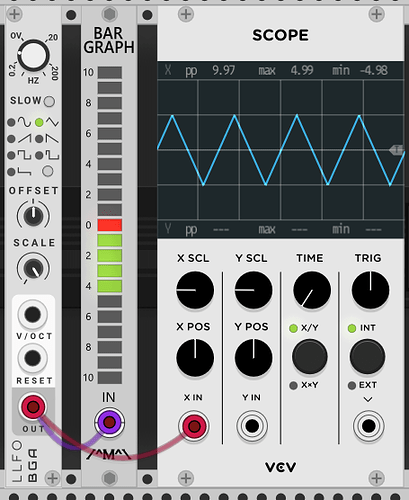 I guess you are looking for a single “channel”, “slim line” vertical graphical “bar” Volt Meter? And should also measure/display negative voltage?

So, something like just one slim vertical channel of these wide multi “channel” meters?

open a issue on my github, with a module request

Bingo. Like a single one from the GraphicMeter, turned vertically.

As it is, it’s handy for multiple outputs of one module like a Sequencer or Shift Register, but for many modules spread all over the place it results in a lot of cables dangling everywhere and you lose the visual connection.

Count Modula “BAR GRAPH” - Could it have a 1HP option?

open a issue on my github, with a module request

Ummm… Where and how, exactly? I’ve never done that before.

Sorry, 1HP is less than the width of a jack. 3hp is as small as I will go on functional modules.

Ah. Done. Now I need to absorb a bit of GitHub Culture before composing my “New Module Request”.