Lindenberg Research: The adventures of Neo

It started with a new module from Lindenberg Research. A new filter called Neo, which is the first filter of the developer which is not the emulation of an existing filter model, hence the name Neo for new. Already at the first quick testing I noticed that this filter is something very special and deserves a detailed test. That’s why I created a patch with all the modules currently available from Lindenberg Research, supported by a few colleagues from other developers. Yesterday I gave a short enthusiastic feedback to Patrick Lindenberg, with the remark that stereo and polyphony would also be great. Today Neo is already polyphonic and by splitting the polyphonic output signal with Split, we have a stereo option. And that’s what I wish for all other modules.

Nice piece Herbert, and the Neo filter sounds good but… more importantly, do I see you soloing multiple tracks on @Squinky Form and Exfor ?

yep, this option will be in the next release and by the way, it’s Norbert

Polyphonic Lindenberg modules are high up on my VCV wishlist. Glad to see at least one coming. Hopefully more to follow!

Agreed. I’d also get a lot of use out of polyphonic Geodesics Energy (my favorite oscilator for drones) and I imagine we’re all hoping for FM-OP (as well as some other Bogaudio) to make the change.

Patrick asked me and I said yes

And my initial tests indicate that it is polyphonic? Or at least I think it is.
edit to add that I have “done a stupid”. Only Woldemar and Neo (and the new poly/stereo thing) are poly.
this is appreciated but I’ve been really looking forward to the filters being poly.

Also, when i add an extra polyphonic source to the patch neo seems to crap out. (win 7 64)

Reported on Github but posting here in case others run into it or someone thinks I’m doing something wrong.

Neo is almost there with Polyphony. It seems to only respond to monophonic CV signals though. Here’s what I’m doing:

Result: only the first of 8 voices will trigger the envelope on the filter Frequency. Same appears true of other CV inputs.

Expected Result: Filter Frequency Envelope CV should be engaged with each voice. 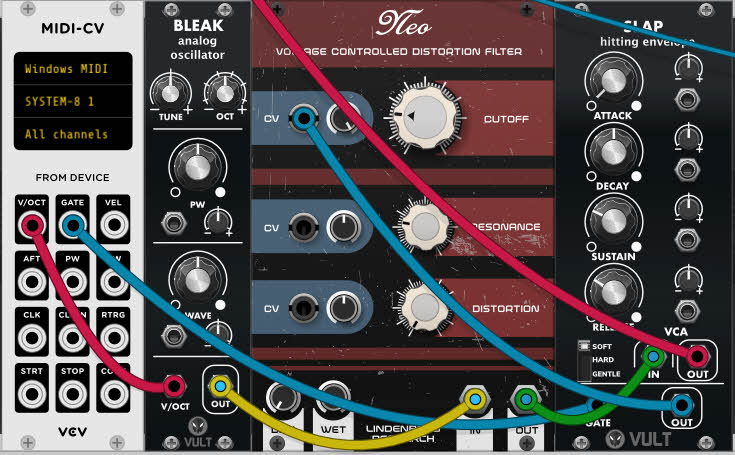 you send 8 voices from Bleak to Neo, which outputs 8 voices, so what’s the problem?

The problem is Slap receives 8 gates, which triggers 8 envelopes from Slap to Neo’s CV inputs, but Neo only responds to the 1st of the 8 envelope [CV] signals. Replace Neo with a polyphonic Vult filter, and you’ll hear the difference in how the Frequency CV is triggered with each note.

You are right and this is Patricks answer to one of my questions:

Neo is not really polyphonic, since the CV inputs would also have to be poly, which then gives problems with the CV visuals (which then would have to be several).

But he says, he will work on similar options for his other filters and then on real polyphony, but it will take some time.

I just replied to my own Github issue with that, to offer some advice on how to deal with it:

I don’t think you need multiple CV visuals to show the polyphony. For instance, 16 arrows/indicators on each knob. I think having the visual reflect the “highest” CV value is good enough. This is how quite a few polyphonic VST synths I own with similar indicators work. This way, the max CV value is always shown.

I think I’d rather there be no indicators when the CV is poly. I’d rather use an external scope in that case.