Leakage Out Of Tune?

Hi,
I was patching along with one of @Omri_Cohen 's tutorials when I noticed that he was using Leakage as a S&H and it sounded great.
Only thing is when I use it the same way it is not quantized as it should be.
I asked Omri to test this but he did not find anything wrong with it.
Is it my setup/machine or is there something wrong with Leakage or am I doing something wrong.

So here is my question , I attached a vcv file in which you can choose two sample and holds, Leakage and one from Count Modula the choice is made with the AS Trigger MKII latch button.
Press run on the clock and choose with AS trigger , take your time.

Do they both sound in tune, or is one of them (sometimes) out of tune ?

Thanks in advance for trying .

I can confirm that there is a difference. Using polyprobe I note that leakage is has four outputs whereas the otherone only has three.
There is a Merge that links into the Leakage CLK input that has 4 inputs. If you reduce it to 3 then things improve.

I’m currently in DAW reinstall hell so won’t be up and running again in a few days, but I’d also just look to rule out a few obvious things like: is everybody running the same versions of the modules and same OS for everything? Different versions of modules could explain why Omri’s patch is in tune in his video and patch, but sounds different (out of tune) on a different machine with the same exact patch. So everything up to date? Does anyone else get tuning issues with that patch? Is Omri running a beta build?

If that stuff gets ruled out: what about sample rate? Maybe Leakage goes out of tune at 48khz or something so is everyone running the same sample rate?

I’d look to test and reproduce here but it may not be until later this weekend that I actually get the chance.

@dag2099 is correct about weirdness. Leakage is always 1 semitone lower than those other 9 S&H’s 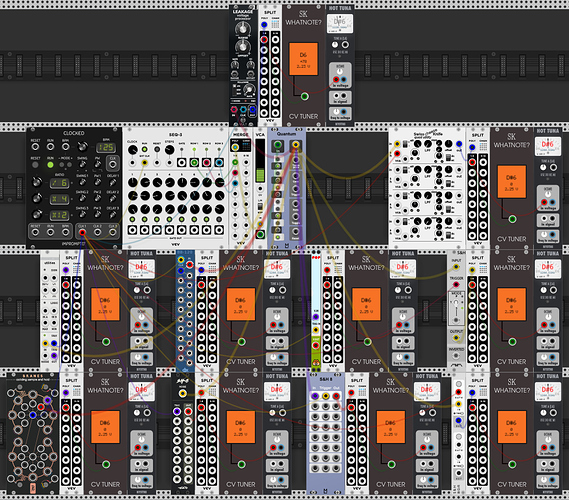 Thanks for trying, but even when I remove the 4th gate it’s still out of tune on some notes.

It definately has an effect though. I also noticed when i used 2 polyprobes on the outputs of Leakage and the other s&h that the timings were a little different.

Wow thanks for trying, you went the extra (green) mile

And capturing the “critical” moment in your screenshot.
Now I think I have to ask @modlfo why this is ?
EDIT Wow again… your patch is so much better in showing my problem than mine is, I watched it for a few minutes and Leakage has not produced 1 single quantized note ! Well done.

Some slew or something ? IDK

It’s actually not really out of tune by much.
It’s just 8 cents low.
In a big patch something like that could get buried and be unnoticeable or create extra movement.

I think this issue is more in the side of the quantiser. My guess is that, because of the slew limiter in leakage, the voltages are not exact. For example, if you input 1.0 V, it will approach to that value and Leakage will output (for some time) a value of 0.99999V. The quantiser may be using the function floor rather than round. Then the quantiser outputs the nearest low limit rather than the closest value.

So does the slew limiter in Leakage ever turn completely off? I use it a lot but i tend to put the quantiser after so i’ve never seen this happen.

No. It just becomes extremely fast, above the audio rate.

I use the term out of tune loosely , what I mean is NOT quantized and In this case (see screenshot) I’m almost 50% off. 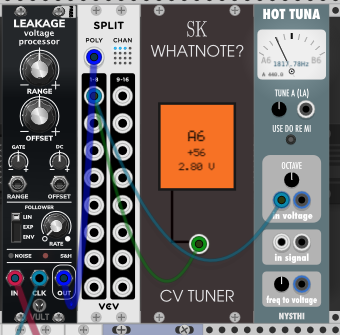 But I already know what’s going on, and I normally would use the sample and hold before the Quantizer, but it was only because I was following Omri’s Tutorial , and he did it the other way around, and on my PC it sounded BAD

Thanks to every one for testing and Leonardo for explaining what was/is going on.

Oh, now I see. You had the quantiser before the Leakage. In that case, my initial explanation above is wrong. The reason I can think of is that Leakage is taking the sample very eagerly. Leakage triggers the S&H exactly when the clock signal is larger than 2V. It can be the case that the output of the quantiser haven’t reached the final value. If this is the case, it’s matter of micro timings and it’s better not to rely on the events being triggered in a specific order. Better use the quantiser after the S&H.

In Dopamine I had to implement a “smart” way of recording sequences, because when testing it we found that sometimes the notes come a few samples before the clocks or vice versa.

I don’t think it has to do with timing, because here (screen shot) I’m feeding it a constant voltage and it’s not able to sample that correctly. 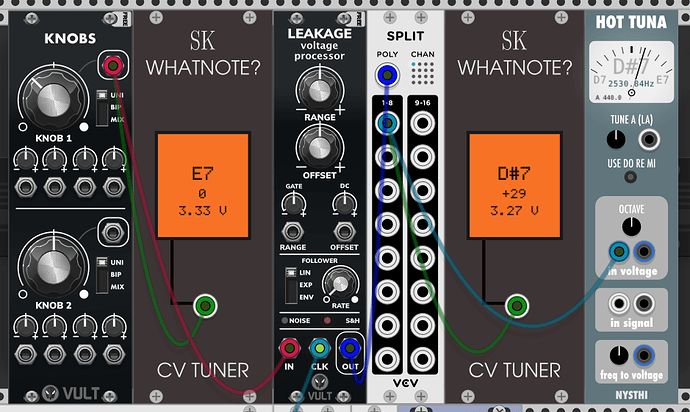 I have no explanation for that

I’ll investigate more. I was checking the code last night and there’s nothing that could make it behave like that. Which OS do you use?

The OS I use is Windows 7, thanks for investigating.

i’m also on windows 7 if that helps.

Man, that’s so weird… I’m happy it worked well in the video, and I have to say, I cannot seem to reproduce this.