I went to pick up some used Eurorack gear because the guy was getting rid of it, having moved to a new rack 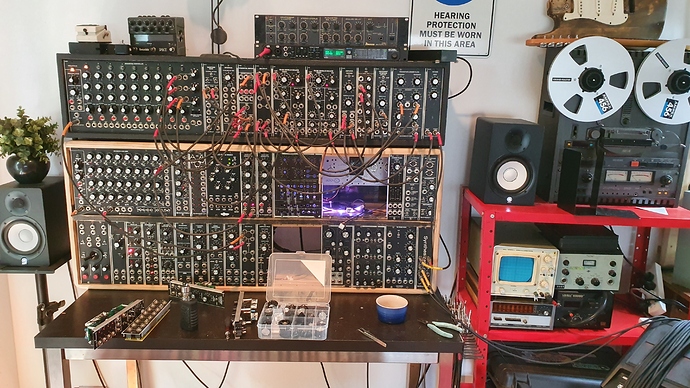 Is that 6U modular ? It looks great

You’re shitting me, right? You’re going from the Crave to… this? Did you get it for free? Can’t really tell from the picture but it looks like a 5U system rather than Eurorack. If I’m right this system is going to make some monster sounds for you, can’t wait to hear it! Good for you Paul!

No, that’s not mine! I wish! That’s what the guy was getting into, and why he was getting rid of his Eurorack. So I just ended up with a few bargain Eurorack modules with lots of bits and pieces thrown in free, since he didn’t need them anymore.

Haha, Ok then. Did you at least get to listen to it? What euro modules did you get?

Did you at least get to listen to it?

It sounded great. But VCV Rack with a bit of Eurorack is plenty for me right now

I have a few utility type modules now (2hps, quantiser, seq switch, VCAs, EG, etc). Keeping my eyes on the second-hand sites for people who aren’t asking a fortune for used modules/cables/skiff. But the main thing I picked from this guy is more substantial - I’ll keep that for a surprise tune (hopefully, when I work out how to get a good sound out of it).

There is a Clouds clone called Typhoon that looks interesting… but that’s not it.

Morphagene is on the wish list… and that’s not it.

I wonder what it could be

Update: I’m going a little off topic, but the new module might wait a little while, because I have arranged for access to a bit of gear. I wasn’t expecting hands on of something like the Metropolis and Atlantis to give me such a different feeling compared to dTroy and Interzone, so I might see if I can live stream or at least record while I have them. I mean, I could do the same thing in Rack by itself, but that physical feedback and response surprised me. Gave me more/different ideas.

Yeah, both Metropolis and Atlantis always look very appealing to me, but they’re not cheap.