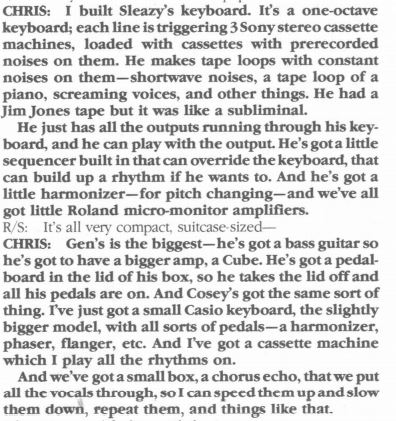 Any module ideas to recreate the keyboard controlled tapes:

Triggering them via a sequencer? Any other way to trigger the samples Thank you for your time and any help offered!

Triggering samples is best done with a sampler. Choose the one you’re comfortable with:

Well… I have done a patch set up with Count Modula 8 Step Trigger sequencer and MscHack’s ASAF-8 and got some very messed up samples which I then sampled again with 2 of your Tape recorders-some good messed ‘Industrial music’ samples were the result. Here’s the patch:

and when we were kids, they hadn’t even invented samplers yet! Now get off my lawn. 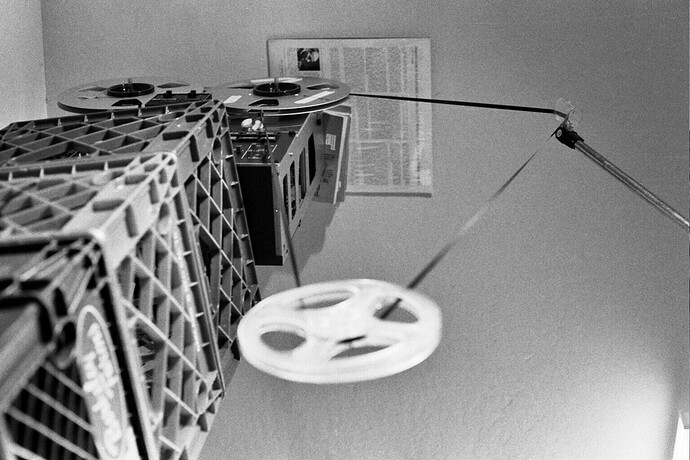 So that’s how your man did his dog bark tape, tape , tape. I’m not on your lawn, do you own everyone’s lawn, blah blah, mutters into the distance!!! Were any tapes broken in the process of this photo?

This was actually several years after dog barking. This was trying to salvage a song (In my dorm apartment). I was moving to NCY and we wanted to record a song before I left. After several DAYS of playing “drums” (cardboard boxes, suitcase, silverware) we realized the timing was terrible and we couldn’t use it. So we voted on which bars were the least terrible, then spliced them all into a loop. That’s the loop and how we played it back without breaking it (it’s not really clear, but the R-R is on top of a tower of milk crates, wedged into the ceiling with some books and records). It worked fine and nothing broke.

So that’s how to do it! Ahornberg was assuring me this could be done in VCV Rack… well the tape without no pinch rollers, back and forth effect. It was based on the Open Reel Ensemble video on ‘What are u listening to’ thread. Always loved tape, even got a reel to reel buried under some cloth storage linen boxes. I keep threatening to dig it out and get an hardware Reverb pedal but haven’t done yet! S’pose the tape loop from this session disappeared into the ether? So was this still FLAK?

You should remember that technically it wasn’t very difficult to do this stuff with tape recorders. Pulling a tape through any reel to reel while the transport was stopped would let you manually move the tape or reels any way you wanted. “rocking the reels” this was way how you found splice points. Of course Laurie Anderson made it theatrical by putting the tape on a violin bow and the playback head on a violin body - totally cool idea, but same basic thing Frederik was doing with his tape of his dog.

Splicing tape was something that “everyone” did. Eno, Czukay, and TG were famous for using it creatively, but any recording engineer or adventurous home recordist could splice tape. I remember seeing punk rock band “mission of burma” and noticing that they had a “fourth member” mixing sound but also making live tape loops as they played and mixing it back into the songs. I can tell you he was thrilled when I noticed what he was doing!

Here you can hear Mr Swopes ‘Mission of Burma’ mess with the 2nd track live-scratching the tape he has recorded-3.24 mins. That was a great way to great your own sound! Would love to have seen that live, was the man chuffed when you knew what he was doing when you saw them. Thank to YouTube s’pose we can now. TG in Sheffield any ideas what Cosey is doing here: 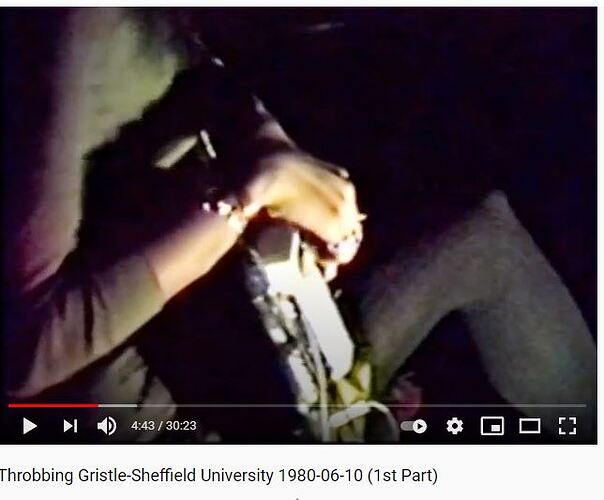 I saw them in 81 opening for black flag, but this show where i talked to the tape guy was much later. maybe late 82???

iirc here you can see the small keyboard in action: 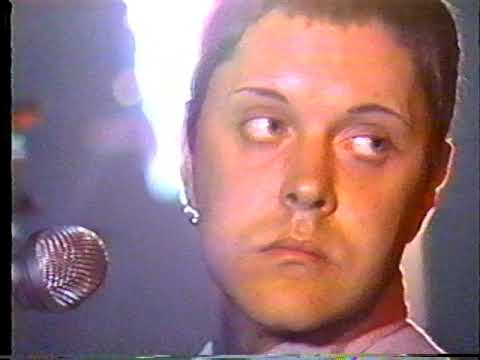 Thanks, so it looks like only fours keys in length and so many samples on the tape to work with. Much appreciated. Shame, we have not got a piano key module trigger in Rack or would a piano roll do the same job i.e. trigger a short sample and then play it?

So did the tape guy, have a lot to say about how he did it? Never got into Black Flag, my noisy bands were Loop, Spacemen 3 and My Bloody Valentine latter in the 80s. I was listening to Heaven 17, Blancmange and The Smiths around 82-84. The Jam had just finished in 82, so The Style Council were also a focus, I turned into a ‘Football Casual’ around 83-85, then into those noisy bands along with The Fall and then Madchester in 87-89 and House Music.

So did the tape guy, have a lot to say about how he did it

I don’t know. I got the impression he did his own stuff. Here’s what wikipedia says: " Miller then contacted Martin Swope, with whom he had earlier written some John Cage and Karlheinz Stockhausen-inspired pieces for piano and tape. Swope was immediately enlisted as the group’s live audio engineer and occasional tape-effects artist. His latter role grew gradually, until by 1981 he was adding tape work to most of the group’s songs, and was regarded as an integral part of the group, appearing in group photographs and receiving equal credit on recordings."

Thanks, I saved the same section from Wikipedia or very similar as well. Unless I see it written down in front of me, I soon forget these days.

Mission of burma is most know for a very early song of theirs “that’s when I reach for my revolver”. Moby did a pretty straight cover of it in the 90’s. 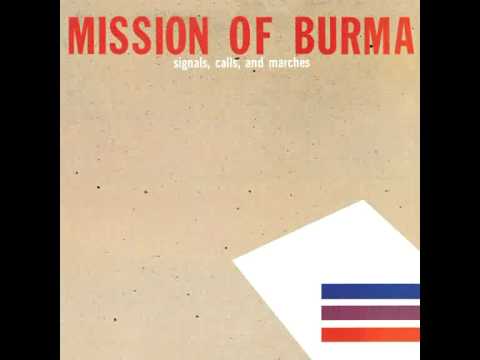 The title sounds to be a quote from Hermann Goering ‘When I hear the word culture, that’s when I reach for my pistol!’ Maybe they read a lot!? Anymore tape manipulation techniques you care to share?

well, of course there are all the early tape music people, but I don’t know too much about that. For tape stuff in rock/pop I always think of Holger Czukay, who had been the bass player in Can. again, from wikipedia: " After his departure from Can, Czukay recorded several albums. One of his trademarks was the use of shortwave radio sounds and his early pioneering of sampling,[10] in those days involving the painstaking cutting and splicing of magnetic tapes. He would tape-record various sounds and snippets from shortwave and incorporate them into his compositions."

Thanks, I am aware of the fine work of Holger Czukay-I have a few of his LPs on my hard drives. Really enjoy his take on all sorts of different sampling techniques. There were alsorts of people manipulating audio, such as Pierre Shaeffer in Paris and Italy in Sound exploration studios from 1947-60s. USA there were 2 blokes I can’t remember the name of??? RCA Synthesizer Lab, BBC Radiophonics, Germany and Poland had their share as well.

yeah, those are some of the tape music people I don’t know about. I guess one of the most famous of all tape pieces is alvin lucier’s “I am sitting in a room”. And of course Steve Reich started with tape loops (come out, and It’s gonna rain).