JACK as a Plugin

Since there were open issues on Github about JACK support, I looked in to suggestions of implementing first-class support in the form of a plugin: 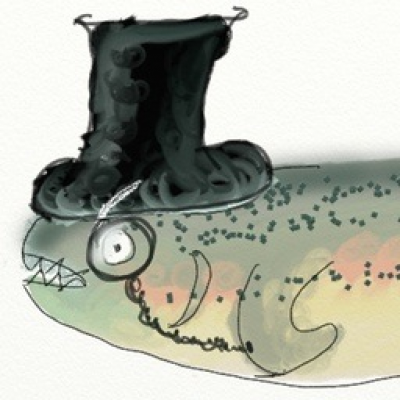 First-class JACK support for VCV Rack. Contribute to Skrylar/skjack-vcv development by creating an account on GitHub.

It works for me, on a Lenovo IdeaPad (laptop.) I’m not aware of anyone else using it yet.

Instead of using an Audio or Audio 16, you use one or more JACK Audio.

Strangely, it may even be possible to support JACK Sessions as a plugin. The only two things needed to do so are:

Are you working exclusively on Linux, or will a Windows implementation be included, as well?

I don’t have a Windows dev environment set up. It should work there; there is nothing platform specific being used.

Are there many JACK clients on Windows? I’ve only seen Radium support it there.

Today’s work: all four of the output sockets on the module now have corresponding JACK ports; tested sending VCO output to them and each port connected to Non-Mixer.

All I know about it is here:

Today’s work: input ports bring sound from JACK in to RACK (we’re full-duplex now) and you can rename each port individually. Names stick to your patch file (they’re saved in JSON) and load. 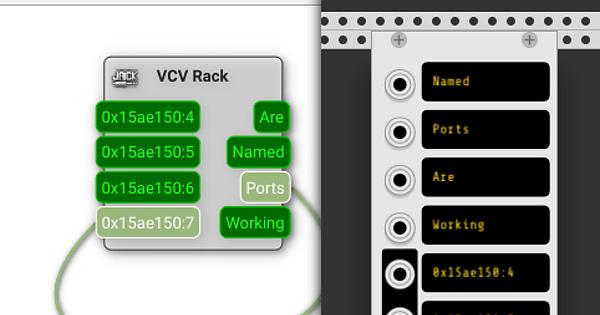 There is one crinkle: ports have to have unique names within a single running instance of VCV Rack. If the names are botched they just don’t work, there is no visual representation of this (although you can see it in your patchbay.) I might add LEDs that light up to represent JACK is running and the ports are live.

Question is: should I start seeking a release build / plugin listing in this state, or wait to also have MIDI support?

I m subscribing to this threat

Question is: should I start seeking a release build / plugin listing in this state, or wait to also have MIDI support?

If it works at all, and does something useful, and is reasonably stable then I say: Relase it! Let the Jack users have a play with it, gain some experience and provide you with some useful feedback.

I’ve put out a preview release on Github. It’s built with the official SDK on 64-bit OpenSuSE. Happy patching!

thanks, @Skrylar I will test this night

The upcoming 0.6.1 removes linking with JACK at build time I’ve shoved all of the JACK interaction to a separate class that loads it at runtime as part of trying to get it running for macOS users. If the fix works for them then a similar trick will be used to get Windows support working as well.

Fixed on Mac! Thank you.

I’ve uploaded a binary. Hit me up for any further Mac builds as required.

I have a couple of features and suggestions , I don’t know if could be possible

sometimes 4 channels are not enough to route audio trough jack (I usually use the Audio 16 module of RCM) perhaps 16 channel or even a custom number will be great.

many thanks you for your effort

sometimes 4 channels are not enough to route audio trough jack (I usually use the Audio 16 module of RCM) perhaps 16 channel or even a custom number will be great.

I thought about having an 8-IN and 8-OUT variant, just to make it easier to add extra ports of a single type. That might happen.

amazing, I m not tried to use 2 modules Since two audio modules in the same patch produce a bigger amount of the Xruns, I will test today adding two modules, 8 channel variant is a great idea!

by the way, my defauld patch include a Audio 16, if I add the jack port beside the audio 16 , then if I delete the audio 16 vcv rack crash

The audio modules jam up Rack until the audio server comes by to pick up the sound they’ve buffered, so having more than one probably has them stepping on each other’s toes (thus the xrun.) Come to think of it, the JACK Audio module does that too. May have to fix that or 0.6.2.

@skrylar thanks for your efforts! I really want to try this out… windows 10 user here… Anyway, I can’t get this thing to load… unzipped the file and put it in my plug-ins folder… Do I have to manually compile it or something? (not sure what that is but I’ve been told this before). Hopefully I can get this up running! thx

It has to be manually compiled and YMMV as there are no success reports for this module on Windows yet.

If you want to learn how to compile stuff then read here:

@modlfo has a tutorial for Windows on how to set up your dev environment and build Rack: