Is there a module similar to Intellijel Octalink or Deopfer Multicore Available (Preferably V2)?

I am looking through my collection and have Googled, but am having a hard time finding anything. Is there a module such as Octalink or Deopfer Multicore available in the library? I’d like to have clock going to a bunch of different modules without cluttering the rack. Thank you

One option is Teleport–I haven’t used it much (yet) but I think lots of people use it for distributing clocks to different places.

V1 only in the library for now, but I believe it’s in beta for V2 and should hit the library soon. Here is the V2 branch if you’re able to build plugins, and there may be a binary available (didn’t see one on github, but I didn’t look very hard).

Lots of details and some sample clock setups in this thread (and a cool detail about how it works between VSTs):

It’s amazing stuff haha - I’ve had an instance running on and off all afternoon/evening that has no clock in at all - all clocks are teleported from another instance and it’s been solid so far. Maybe you could have 2 options in the right click menu: Teleport (this universe) and Quantum Teleport (other universes)

I’ll keep playing with it and give it a proper workout and let you know if any issues. This is my clock setup that Teleport makes possible - you can see its getting a g…

Awesome, thank you. I’ll give it a go

By the way, if you want something that’s more like Octalink/Multicore, VCV Merge and VCV Split operate almost literally like them (but with mults built in for free, of course). Create a 16-channel cable of your clock, mult it to Splits, and you get up to 16 local copies at each Split. Lots of ways to make that more elegant, but Split/Merge is nice because they’re both in Fundamental. 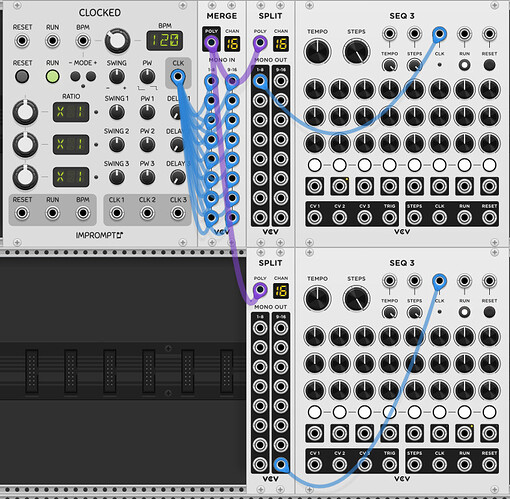 If you want to not create 16 cables for this let me recommend MonoPoly by 23volts. I’m sure there other modules with similar functionality too. But what @gc3 said - it’s nice to know how to do it without third-party plugins.

Some good options here, thank you all. I am currently attempting to compile Teleport, I have compiled stuff from GitHub before (mostly 3d printer firmware, and the ER-301 emulator), but never a VCV module, so having to do a little research. I’m also going to give the others a try as well. Thank you all again

I assume the build cannot be done (at least easily) in xcode? I have the latest Rack 2 installed, and got the SDK, but since I am not a programmer am not sure where I need to put the SDk at? (I am on a Mac if that helps)

Following the docs above is best initially. Put the SDK anywhere, and you specify where you put the SDK like this (from the docs)

I’ve tried, and can get the Fundamental to build just fine. However, I am getting a lot of errors when trying to build both the Little-Utils and 23volts plugins listed above. Here are the error(s) from Little-Utils:

Here are the error(s) from 23volts:

Any ideas on what I can do to remedy these errors (I am not a programmer, but I assume the code in those files needs to be edited to use the correct identifiers)?

At a first glance, are you sure you pulled the v2 branches?

I’ll take a look and see if there are V2 branches listed.

Edit: found them, apparently I dont have the command right yet lol

Ah! Yeah, the v2 branches are not the main ones yet, I think. I’m not in front of my dev machine and haven’t checked but that looks like the V2 SDK trying to build V1 code.

That is indeed what I did lol, this is what happens when a network guy tries to compile software lol

Having cloned the repositories you want to git checkout v2 (I think, I can never remember git commands offhand) and try building those. Should work better…

Okay, so I gave up on the commands and just downloaded the zip from GitHub, dumped it into the plugin folder, and successfully (as far as I can tell) build the 23volts plugin, going to do the Little-Utils now

thanks for the assist to all of you

Nice! No shame in doing it that way

Don’t hesitate to circle back if anything comes up, and congrats on the build(s). These two should be in the V2 library any day now but knowing how to build plugins from source opens up a bunch of good options.

I figured it’d probably be quicker that way, gotta get to bed soon and wanted it done before then lol. If I encounter any issues I’ll be sure to post here

Thank you again for the help, and it’s good to know I can get the builds done now, and in the future

Now if only the Instruo source was available to build lol (one can dream right).