Thanks Omri Cohen for the Scenes tutorial. Watched it several times and still learning the ins and outs of the Janneker/Jooper combo. The changes are a little abrupt so I decided to emphasize them (that way its not a mistake its a feature)

I was playing around with Jooper/Janneker, too, and didn’t want the hard cut. Was looking for a soft fade. At the start of each scene, I wish Jooper would be able to send triggers to the outputs which could be passed on to the TACT modules to trigger fade-ins/outs. I tried to jury-rig a Matrix Switch using Bogaudio’s Matrix, but gave up when it got too cumbersome.

Pro tip - the modular Squinky Labs mixers are “better” than our Mixer-8. Although there are a few cases where Mixer-8 is better: if you don’t need/want the extra features in the modular one and are extremely close to running out of CPU, or you know you need 5-8 channels and want to save 1HP of space.

you can do fades with Tact using a uMap (map to the top button of Tact) and an AS Triggers MK1 set to 10V going into the uMap. Then just send a trigger to the EXT input of the MK1 from Janneker or sequencer or midi controller, etc. 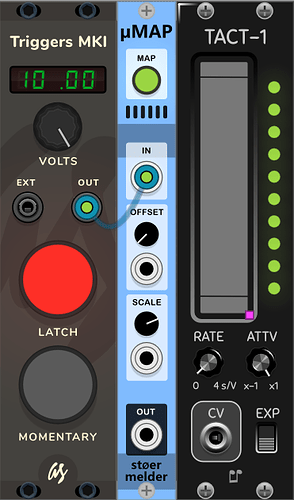 I guess that you can also send positive 10 volts from Jooper through a slew limiter, and using this to fade a VCA or the mixer itself. Just set a nice rise and fall times, and you should have fade ins and outs.

I was playing around with Jooper/Janneker, too, and didn’t want the hard cut.

I tend to use asaf8 to fade stuff in and out. Though I mostly trigger channels with gate64

Yeeeessssssss!!! dag2099, with a 10v latch gate, that works great. That module was hiding from me. It’s tagged as a mixer and I was searching for fader. Just too many modules and some inconsistent tagging.

Thanks all for the tips! I’ll check them out.I was thinking of doing more of a seque - having one or two voices continue and fade into the next scene but haven’t tried it yet. Glad we have a community for tips and posts for inspiration.

Don’t know how to reply all