Ideas for a Lua scripting module

Last month I did a quick proof of concept for a Lua module:

You can see the source code of the echo example here. This was just a quick hack, I want to discuss now how it should look like and what features do you want.

Some ideas what I think should be possible with this module:

Ideas for the API (unlike the VCV Rack API, the Lua script API should be object oriented and easy to use, even if it means it doesn’t run at maximum speed) :

One global Rack class as the interface to the Rack program, with the following functions:

So a simple sum script would look like this:

Note: In Lua the “:” syntax means it implicitly passes the “self” object to the method, so inp1.getVoltage(inp1) is the same as inp1:getVoltage(), but nicer to write and read. Rack has only one object, which means no need to pass a “self” object, think of it as static member functions if you know C++.

To organize the scripts I think it would be a good idea to have a directory for each script, in the script directory, within the Lua plugin directory. I think it would be good to have 3 files at least: module.lua, module.svg and module.json. All module.json files are scanned at start and provide a human readable name of the script module. A right click context menu allows you to select one of the scanned modules. When a module is loaded, the module.svg is displayed, the module is sized accordingly, and the module.lua script is executed. This means multiple independent Lua script module instances can be placed in Rack, with the same or different scripts running.

Don’t know how far this should go with automatic updates etc., but the module.json file could have a version tag as well and there could be a library page somewhere on the web to load Lua modules of other users, or later maybe even later to the VCV main homepage. I think to make it easier it is good to have one script directory for one module, no plugin hierarchy above it.

I think it would be nice if it reloads module.lua automatically when changed. This would make the development process very fast, good for quick experiments that don’t need max performance.

Could the following be possible in lua or your integration of it:

ps: zero experience in lua, but I do have some in other OO languages

Good idea with json file reading, looks like there is already a json library for Lua. I think would be good to include some more libraries, like Numeric Lua. And then showing a warning on the panel when instantiating the module that you shouldn’t use any script from any source without looking at it first

I gave it a try with my current old test implementation and inline arrays. Looks like this:

The trigger is a bit simple, works only with perfect digital gate signals, should be a Schmitt-Trigger. I think this could be in an extra Lua library, which provides some useful utility classes.

i was taking a look at the lua module the other day - more out of interest and not that i have any idea or clue about script coding.
I’m wondering however if the lua module concept would allow for https://monome.org/norns/ based presets or apps to be ported over to vcv rack via the lua module?
Thanks for any reply by vcv rack users.

Uhhh LUA, sounds interresting … well, I never programmed a DSP befor and have never touched LUA, but I heard it a lot from Renoise and Ardour.
Teases me to dive into LUA to maybe programm some modules. (and yes, any hints/help appreciated)
ZeroBrane Studio sounds perfect for me

there is a lua module: 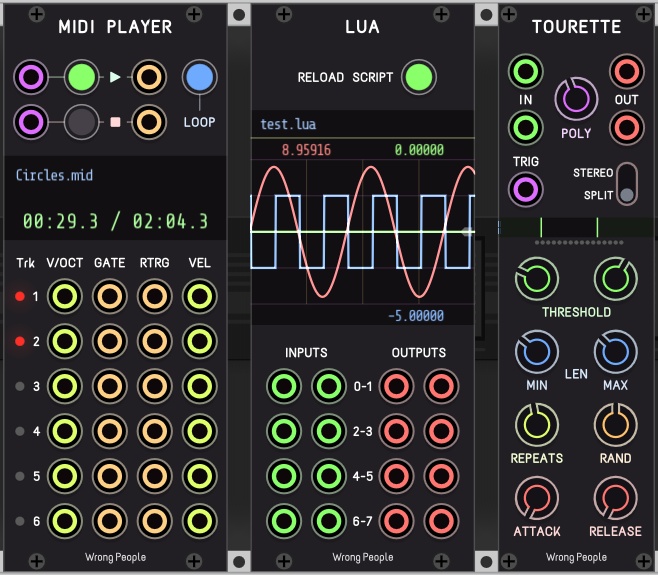 Modules for VCV Rack 1.x. Contribute to WrongPeople/WrongPeopleVCV development by creating an account on GitHub.

I know and have it installed

But afaik this one does not allow any creation of own GUI.
It still gives a nice start to DSP/VCV-Plugin programming