Idea for swing & rush with drums

Don’t have a patch to share yet but… I was reading “Dilla Time,” a biography of the legendary Detroit hip hop producer J Dilla, which talks a lot about how he innovated hip hop beat making, by making subtle variations in swing.

So the idea is this: Use Signal Delay modules to add ‘swing’ and ‘rush’ clocks.

A lesson from my friend Shawn Rudiman is to combine swings to find grooves. I don’t think he got it directly from Dilla, but he makes tracks using multiple drum machines and sets the swing differently for different sounds.

You can do this in Ableton Live by using different swing grooves for different sounds. I generally use a 75% swing groove and then turn down the swing strength. That way I can copy the groove template and tweak the swing amount.

Another Dilla trick is to use samples that aren’t on the grid, so they drag or rush, or give a triplet feel over a straight beet.

Rack is a lot of things but this is how it can be used as a groove laboratory!

I’ve been experimenting with this a little bit in Bitwig and Rack lately. I came across VCV Library - Bidoo lATe which is pretty handy, actually makes it possible to have swing on 24x clocks. I’ve only tried it on clocks going into sequencers but I wonder if it would work for the gate signal after the sequencer.

When you say combining swings, do you mean different swing for each drum sound?

Another Dilla trick is to use samples that aren’t on the grid, so they drag or rush, or give a triplet feel over a straight beet.

ShapeMaster Pro is a great tool for this - set your length to one/two/four bars (or whatever) and draw in your triggers/gates off of the grid. You can right click on the nodes to set the precise offset you want (20ms in this instance) 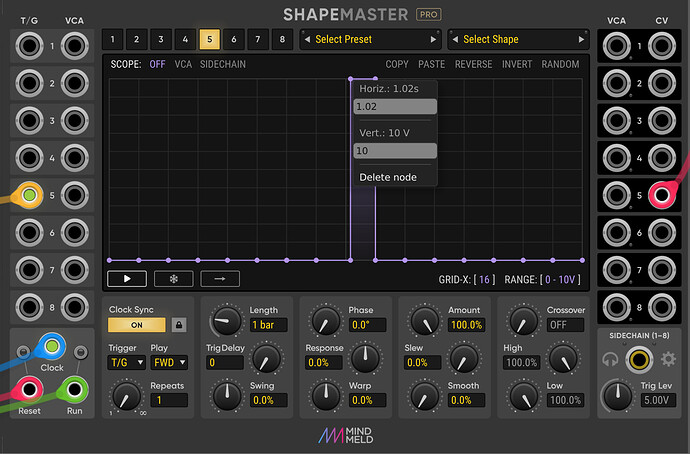 Yes you can just use a signal delay if the offset is constant - but ShapeMaster lets you have some hits on the grid, some off, some pushed, some pulled etc - all on the same channel. You can also set a different grid-x value if you want to add in some triplets for example.

I don’t use ShapeMaster Pro even though I own it because it feels really complicated to me, and I am allergic to reading manuals.

ShapeMaster lets you have some hits on the grid, some off, some pushed, some pulled etc - all on the same channel. You can also set a different grid-x value if you want to add in some triplets for example.

Everything is possible, which is maybe more than I’m ready to deal with.

I have to chime in with a message of support for ShapeMaster Pro - it really is a fantastic and unique module and IMHO certainly something that should be in every VCV rack - it’s both intuitive to get started with and then can go deep. The visual interface makes it easy to draw precise modulation events over time and this gives me very musical results.

Very cool idea. I love adding rhythmic offsets to add interest. An idea I’m playing with lately is modifying the pulse width of a pulse LFO, then using the end of gate to trigger the beat. This keeps everything still lined up:

Here you can create a different groove for up to 16 voices (in this case 3. kick, high-hat and snare). Use the Bogaudio ADDR sequencers to adjust your timing, negative voltage brings the beat quicker (rushed) and positive voltage brings it later (dragged). Making interesting grooves. You can then select your beats on the Trigger Sequencer. It just needs to be reset first for everything to line up. Anyway, I’m sure this is much simpler and better in Shapemaster, I just haven’t tried it yet, and will now. Thanks @steve

I think you can get the same result, yet eliminate the GATES module if you activate the LFO INV button and trigger your drums on the rising edge instead of the falling edge.

Yes you’re absolutely right. I used to do this (invert the LFO) before the gates module came. But sometimes it did not give the expected result. Maybe I just set it up wrong. But the gates module works well.

I’ve done the same with Signal Delay modules before after watching a video about J Dilla. Cool to know that this is another neat feature of ShapeMaster Pro.