How would I merge 2 poly signals?

So how would I merge 2 polyphonic signals?

I mean, besides the obvious: use VCV Split module to split the 2 poly signals and then merge them with a VCV Merge?

By merge, do you mean concatinate two signals together with N and M channels to make a poly signal with N + M channels?

Besides the VCV modules you mention, I know of 2 utilities that might do what you want:

The 23V Poly Merge claims to be that, but it doesn’t seem to work the way I’d expect.

You could accomplish this via:

Then, on Boly Puttons, depress buttons 5,6,7,8. This will send channels 4-8 of signal B, and all the rest from signal A. Another Toly Pools set to 8 channels of polyphony at the end of the chain will output an 8 channel poly signal. Otherwise, I believe the output will be 16 channels.

The 23 Volts module seems to work actually. Did you right click it and selected the right amount of channels?

I also get strange results from the 23 Volts PolyMerge. In all of the following photos, 4-channel input mode is selected in the contextual menu: 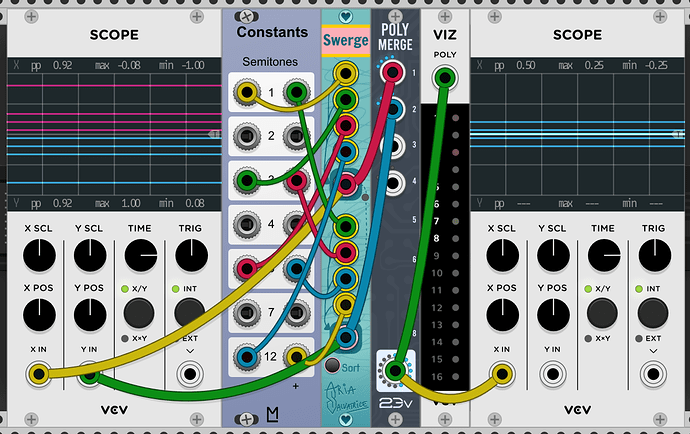 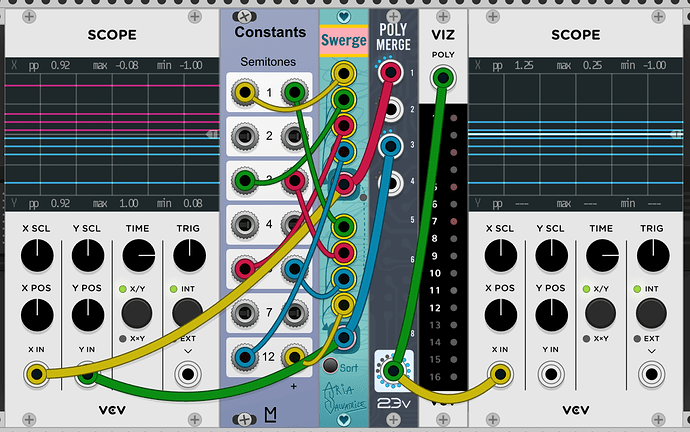 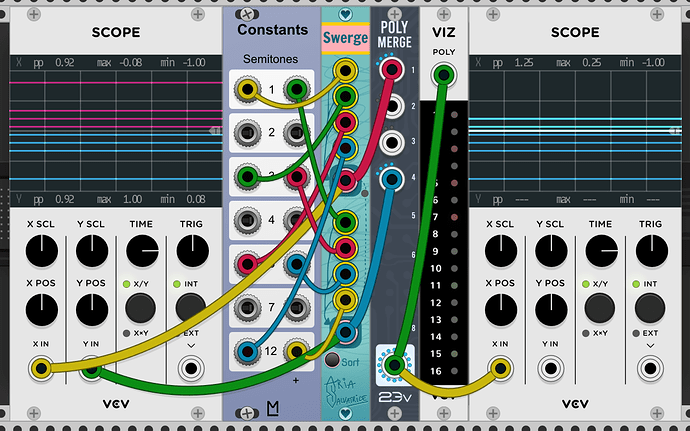 I’m using Amalgamated Harmonics PolyProbe to look at the output from a similar patch using 23 Volts Poly Merge and alternate channels are set to zero for me. Maybe it’s time to file a bug report?

@chaircrusher I’m not sure I get what you are trying to do?

When you say 2 sequencers with poly do you mean you want to merge them but assign one sequencer to channels 1-4 and the other to channels 5-8. So what you end up with is one poly signal channels 1-8?

But yes I wanted exactly what you described: 2 4voice poly signals into one 8 voice signal. That 23volts module would be perfect if it wasn’t broken.

if you need to interleave (or DEinterleave channels) you can use also nysthi::interleaver

That’s perfect since I’m merging a bunch of voices without caring about order.

23 Volts PolyMerge is fixed in version 1.1.5, presently available on GitHub.

For some reason it does add +1 empty channel when using 2-channel and 4-channel inputs; for example if you add together two 4-channel cables, you get a 9 channel cable where the 9th is empty (zero) but the first 8 are correct so I don’t think it’s an issue.

23volts modules for VCVRack. Contribute to 23volts/23volts-vcv development by creating an account on GitHub.

For those who are still referring to this old thread, there’s a newer solution, which is also available in Rack 2—Grande PolyMergeResplit.

It can merge up to four arbitrary polyphonic signals (as long as the total channel count doesn’t exceed 16). 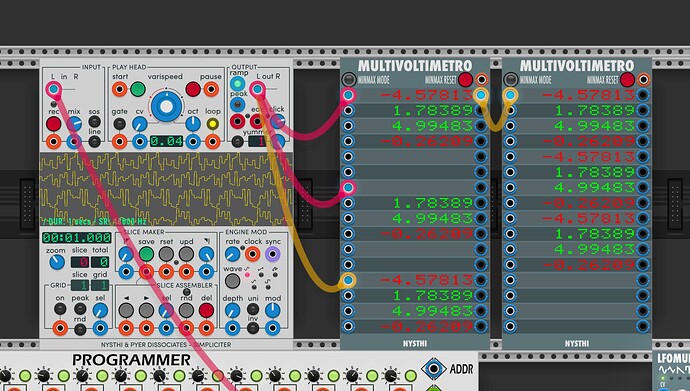