Hold gate based on clock

I love playing with generative music in Rack. All the examples I have seen tend to play either very long pad-like sequences, staccato sequences with an AD or regular notes with ADSR. Thing is, most note lengths the are the same or shorter (ie. Eighth note, eighth note, 3 sixteenths, more eighths). I’d like to generate sequences that include longer notes too (ie. 1/8-1/8-1/8-2-1/8).

I haven’t actually seen a gate sequencer yet that holds a gate open for enough time that I can get this to work. I’ve been experimenting with a setup that receives a gate, goes high for a certain number of clock pulses (using ML’s Counter module) then back to low after the set length of pulses. I can’t seem to figure out how to keep the sequencers gates “silenced” long enough for the held note to finish.

Is there something I’m missing that does this already? Has anyone else succeeded with random held notes?

This is my go-to for converting triggers to gates:

Another trick you can do is use a random or programed gate into a flip/flop. They will give you loner and shorter gates.

If your looking for a sequencer that has built in variable length gates I’ve got a few. Specifically they have ratchet modes that let the clock sometimes go faster. I have a free one GlassPane. Which Omri Cohen did a wonderful video on: 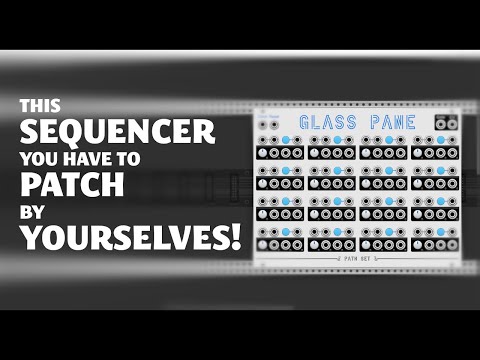 Hah, great to meet you! I was actually using Glass Pane in my original attempt at this, I use the ratcheting to get the shorter gates I want, but had trouble with longer ones. I had a setup where I ran almost every output to another module then back in again. Kinda worked, but couldn’t quite get what I was looking for.

I also bought Rainbows the moment I saw your update! I really like Bridges & Rings, but would love an arbitrary CV option instead of regular notes so I can send it into a quantizer. Is there a good place to leave feedback? Love your modules though, thank you!

This is my go-to for converting triggers to gates

I use Bog Audio’s dgate for that when I need it. My issue there is that the gate lengths are time based. I haven’t seen one yet that is clock based.

Well thank you for buying Rainbows.

Yeah I agree a CV option would be really nice for Rainbows. Multi TRIG/GATE with delay and settable lenght, clockable, with trigs and probabilities Thanks! Can I also set the duration to use pulses/gates instead of time?

for example if your BPM is 120
the time measure will become 500 msecs, that is a single BEAT

Ooh - the significance of the clockable feature escaped me until I saw your post. Very nice!

I believe @alefnull is working out a clockable gate. Not sure when it will be ready but it’s in the works

ShapeMaster Pro has clock synced cycle lengths from as fast as 1/128 to as slow as 128 bars. You can trigger it to cycle and sequence the cycle length with something like ADDR Seq from Bogaudio to get notes of different synced lengths. When used like this you can think of it as a combined envelope and VCA.

And I love it for it. Made me scratch my idea about a clock division based multi-stage envelope off my list immediately:)

Still here experimenting with getting different gate lengths out of a sequencer.

Top sequencer is running the gate and note cv. Bottom sequencer determines which gate module receives the gates from the main sequencer. The gates are combined with the logic module. I put a couple delays in there to keep the voltages in sync. 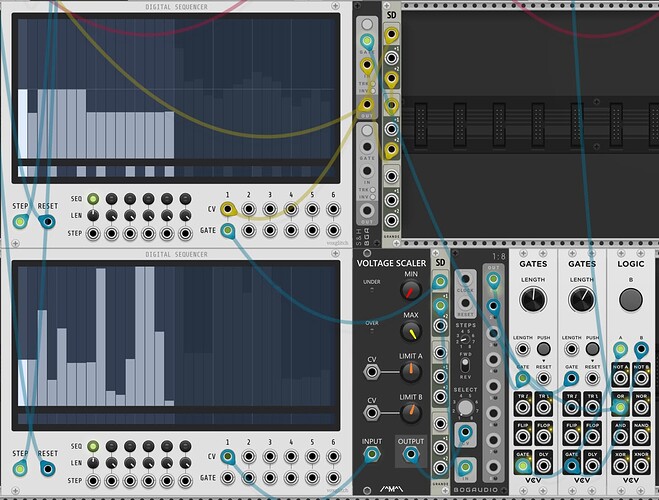 Triggered by Laundry Soup which is running off an 1/8th note (X2) clock from Clocked.

Cycle length is sequenced by ADDR Seq, which is also getting the same clock/trigger sequence from Laundry Soup.

this will likely be a pretty slow process, since i’ve got a bunch of other modules i’m working on, and that one requires more research and experimenting than any other.

Shape master got me closer to what I’m going for than anything else so far, however it’s a little more “static” than I was hoping for. I guess beggars can’t be choosers though, thanks for the tip!

Good to hear - by static do you mean you need to program in the longer notes rather than have them happen randomly/generatively?

Yes exactly! This is what I’m doing currently to get some level of randomness. I have four patterns in here, one of them long the rest short. 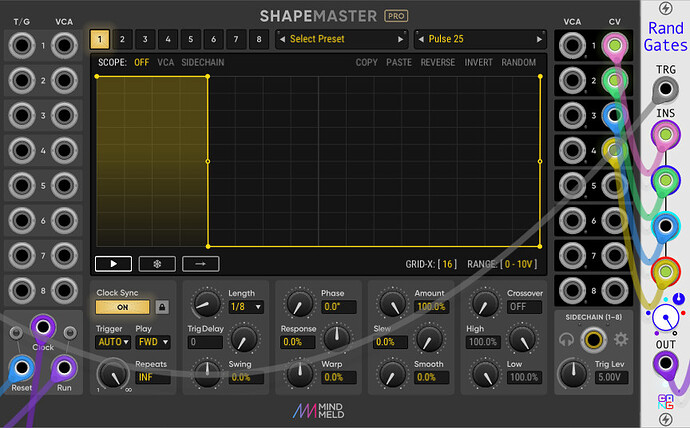 Yeah that would do it - I sometimes forget about using SM as a gate sequencer that allows you to have gates of whatever length you want - and then put them through a randomised sequential switch.

You might also try this - it randomly generates mostly eighth notes, some 1 bar notes, some 2 bar notes and some rests. You can adjust what notes it generates (and the probability of them) with the ADDR seq which is being controlled by a S&H for the random length sequencing.

This is a different approach to generating gates of different lengths (which are usually used to fire an ADSR controlling a VCA). There are no gates generated at all, just triggers, but the end result is similar - notes of different synced lengths.

Upon each clock trigger at Clk, the module randomly decides whether to generate a gate output or not. The Prob input gives you control of the probability of a high gate.

If you use the Gate output, you get a gate that remains high until the next clock trigger. So if you have consecutive high gates, you effectively get tied notes. Say you clock using a division of 1/16, then all your gates will always start at 1/16 divisions, and the length will be an integral multiple of 1/16 note.

If you feed a constant non-zero CV into the Seed, then upon receiving a trigger at Rst the module will reset the pseudo random number generator with the same seed value, thus giving you reproducible patterns.

The module is fully polyphonic, so you can clock it with multiple divisions of your main clock, each channel potentially having its own probability, and use logic gates to combine gates and get even more variety. There is lots of potential for auto-generative patching, and it is simple to set up. I find it intuitive.

The Trig output produces a trigger at the rising edge of each Gate output.

The Clk output reproduces the input clock for each of the resultant high gates, so those gate widths are constant (assuming your clock is consistent)