Good hardware modules to use with VCV Rack?

I started using VCV Rack after doing a lot of research into Eurorack hardware and coming to the realization that I couldn’t afford enough of it to really start making music the way I wanted to. However, as time goes on I may want to start building a hardware rack as well. I’d like to start with modules that can complement what I’m already doing in VCV Rack.

My first question is what the best way would be to get hardware output into VCV Rack—my guess would be through some kind of CV-to-MIDI utility module, but specific recommendations are welcome. (I have tried getting external audio from a 3.5mm cable in via a USB sound card and that works alright.)

My bigger question is just what sorts of hardware modules would really add something to VCV Rack that you can’t quite do with the software alone. My first thought is contact microphones like Mutable Music Things Ears and maybe unusual controllers like Intellijel Planar 2, for example. Maybe an authentic spring reverb? 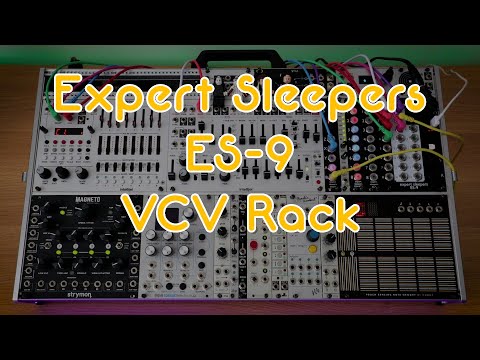 A real spring reverb sounds like a good idea

You also have these in Pedal format, maybe it’s more convenient than getting into hardware modular

Do you want to built a euro-rack system or are you just looking to expand VCV? If the latter, maybe some semi-modular things are a good place to start? 0-Coast, Neutron, the “little” moog things, there are a lot of very capable boxes out there which can be connected via Midi and then patched with each other.

I have recently bought an elektron digitone because the integration with VCV is first class and will expand that setup over time with the above mentioned boxes.

I think Expert Sleepers-Modules are the best way to go here. They have quite a number of modules and expanders doing transfer between both worlds. Some will need to be connected via ADAT lightpipe, which you might have on your audio-interface already or might not.

An alternative are MOTU-audio-interfaces (and some rare others), that allow DC-signals (CV) to be output and input. While you can transfer audio back and forth via any audio-interface, it is a rare thing that interfaces allow CV going either direction. Those slow DC movements are just hipassed out, as they are probably not a musical signal. MOTUs are DC coupled and don‘t have that problem - at least most of them.

To transfer CV via midi is possible with different sequencers or midi-modules in eurorack, but it’s not preferable as your curves are limited to 128 steps as long as you just use ‚normal midi‘ and not some special 14-bit or MPE…

ES and Motu do your audio and CV via audio infrastructure.

What are your hopes in terms of sound and/or usability? What is it that you’re searching for in hardware exactly?

The hands-on approach might be satisfied by a real fancy midi-controller or two.

Take this with a grain of salt, please.

I love the hardware!

Just to add to what you said I believe that RME make a number of interfaces that also have multiple DC coupled/balanced inputs and outputs like the new Fireface UCX II, but they’re several times more expensive than the lower end MOTUs https://www.rme-audio.de/fireface-ucx-ii.html

Thanks a bunch for all the advice so far. The ES-9 looks great; I’d probably default to that for CV to/from my laptop. Given unlimited funds and time, I could happily assemble a big old rack of hardware for making music with or without VCV Rack, but currently I make all my music in VCV Rack and so if I make the jump to buying Eurorack modules, I’d like to start with modules that add something new to that experience so that I can enjoy using them even if I’ve only got around to buying two or three modules, but that I could potentially integrate into a stand-alone rack someday. I’ll probably never stop using VCV Rack though, with all the things I do that wouldn’t be practical using hardware (like lots of duplicates of a module that would be large and expensive as hardware, or smoothly animating things in VCV Sound Stage).

I do have a MIDI keyboard controller—an Arturia MiniLab MkII I bought used, which has drum pads and a bunch of knobs—and it really does add a nice tactile element when I want to improvise a melody or do some fine adjustment of knobs or trigger something “live” while recording. And I’ve also tried pulling in audio from the headphones jack on my cheap portable cassette player for interesting effects. What I like about Ears is that it straddles the line between audio source and tactile gate/CV controller…

Anyhow, I’m not buying any of this until after I’ve bought a house. Music is great, but I’ve got priorities

My bigger question is just what sorts of hardware modules would really add something to VCV Rack that you can’t quite do with the software alone.

It’s a simple question with a complicated answer, because it turns out that most people discover what they actually want to accomplish along the way. There isn’t really any hardware modules you couldn’t do in software, other than tactile controllers. And where they are concerned there are lots of cheap options, in terms of MIDI controllers and also remember that Rack supports e.g. joysticks directly. So just for controllers you don’t need to think about eurorack at all.

I’d like to start with modules that can complement what I’m already doing in VCV Rack.

And here’s the “problem”, because anything hardware can compliment what you’re already doing in Rack. It might be, for example, that you would get the most enjoyment out of buying one of those Roland keyboards, with a million great sounds and presets, and then just hook it up to Rack with MIDI, and now you can sequence that keyboard from Rack in thousands of weird and wonderful ways. Lots of great tunes to be had. Something to think about.

However, as time goes on I may want to start building a hardware rack as well

You need to be honest with yourself: Are you secretly lusting after eurorack but afraid to admit it or do you just want some fun hardware to make lots of sounds. Different propositions. If you do want to dip your toe into the euro waters you could restrict yourself and get a small eurorack pod, and then stick into it e.g. an ES-8 (or -9), a 4ms SWN and a MI Beads. Driving that from Rack and taking the sound into Rack can give you hours and hours of sound, fun and experience, to see if it’s what you’re after, and still keep the budget down.

One approach to distributing ‘tasks’ between VCV and hardware is to use hardware for things that actually make and process sound (VCOs, filters, LPGs, wave folders, effects etc) and use VCV for everything else (sequencing, logic, modulation, mixing etc).

An ES-8 or 9 interface is definitely the best place to start though.

An ES-8 or 9 interface is definitely the best place to start though.

Another software guy looking to expand into hardware here…

If I had an ES-8 or 9 as my interface, I get that I’d be able to send CV to/from VCV to any hardware modules, which is rad.

The bit I have not been able to answer, is would I also be able get the audio from a mackie mixer that has other synths plugged into it or would I need a 2nd audio interface for that?

Boredbrain Music are releasing an ADAT interface called OPTX soon which can do CV back and forth. No details on their website yet but it’s on their Instagram. Some basic information here: Optx, Injectr and Eqx5 modules coming soon from Boredbrainmusic - gearnews.com.

Get a norns and crow.

Or anything by Nonlinear Circuits.

My first question is what the best way would be to get hardware output into VCV Rack.

I’ve recently got into hardware Eurorack after a long time in VCV Rack world. Not an expert by any means, but thought I’d share a few things. This is where I’m up to at the moment: Current - Eurorack Modular System from alanholding on ModularGrid.

The above sounds a bit like I’m whining, but I’m not. I’m having lots of fun with the thing so far. Feel fee to ignore all of the above and go your own way instead of listening to a rando on the intertubes.

Edit: One thing I did was take a long hard look at all my saved Rack patches and figure out what functions I use all the time, e.g. LFOs. Get modules which support them.

Anyhow, I’m not buying any of this until after I’ve bought a house.

The bit I have not been able to answer, is would I also be able get the audio from a mackie mixer that has other synths plugged into it or would I need a 2nd audio interface for that?

No, ES-8 and ES-9 are perfectly fine for handling standard line level signals.

I use Stoermelder MIDI-CAT with a couple of pieces of inexpensive hardware. It’s a two-way connection as it can feed back to your hardware if it can handle it. Word of caution, if your hardware has some control software running while you try to use MIDI modules, VCV Rack often crashes when it encounters a data source that is open by the hardware’s control software.

Partly due to the long wait for V2, I recently bought an RME Digiface interface which has 4x ADAT in/out ports. Not only is this great for interfacing with Eurorack, running a couple of ES-3s, ES-6/7 etc and an ADA8200 (8 channels of line in/Mic pres) on 2 pairs of ADAT ports, I can use the other 2 pairs (16 channels of in /out) in loopback mode using their TotalMix software which is great for sending audio internally between applications. I use these for sending audio between my DAW and VCV and it works better in terms of syncing the two than any previous method I have tried with pretty low latency (the RME drivers are very good). And it’s all done without aggregated devices using software loopback etc.

For the first time I can reliably get my DAW, VCV and eurorack all happily playing in sync at the same time. Definitely something worth considering if you are in the market for an ES-8/9 as the Digiface with ES-3/6 combo and its built in loopback functionality offers some significant advantages.

I bought a digiface usb recently too. It’s fantastic. The only one issue I had was mine was suffering from the odd bit of clicking noise, but a tip on a site suggested ensuring it had an entire usb hub to itself and since then it’s been perfect.

Did you read you can also combine up to three digifaces on one Windows driver to theoretically make a 90 channel megabeast?

Did you read you can also combine up to three digifaces on one Windows driver to theoretically make a 90 channel megabeast?

Yes I did - crazy stuff!