Glue the Giant Mixer: Patching in a Limiter

Once I got a grip on the devices, I found it fairly straightforward to wire up a good default mixer for myself with sends for a delay and reverb.

I’m not at my PC but I believe you’d want to patch the limiter into the red send and return of Bus Route then the Bus Out from that module into Bus Depot.

Tried that. It limits only the red bus. The blue and orange buses continue to scream away.

Hmmm… only other thing that comes to mind is two instances of Bus Depot. Main outs of one into the limiter then into the inputs of the second.

With just a limiter at the end of a mix, I would patch the MIX OUT of the last Bus Depot to the Limiter. Then take two outputs each from both the left and right outputs of the limiter. Send one pair to your card and another pair to something like an analyzer. That’s one I would do.

You can also use another Bus Depot. It works well to have your pre mastering mix to the first Bus Depot, then any mastering effects (EQ, compressor, limiter, etc.) chained before aux inputs to the final Bus Depot. They are lightweight modules. For example, use multiple Bus Depots to create mix groups. Use an extra Bus Depot to check the output of a limiter. To be clear, a master mix effect does need to happen after a Bus Depot combines all the buses.

Thanks for trying them out!

p.s. And one final option, but not for a limiter, with some effects you can apply them to the polyphonic bus cable before a Bus Depot (but that depends on the type of effect, and depends on if the effect supports polyphonic cables).

Thanks. I’ll work through the options.

Thank you for the question. I’m adding these lines to the User’s Guide. They are probably more clear and concise than my ramblings above.

None of the Modular Bus Mixer modules, including Bus Depot, will clip (or clamp) your audio streams.
You can safely add compressors or limiters after a Bus Depot module has mixed your stereo buses."

Too creative ? I used 3 limiters after the Bus Route 1 for each channel.

Or is this absolutely NOT what you want ?

I ask because you say,

but BUS ROUTE has no meters, so I don’t really know WHERE you want the limiter(s).

You make me smile, Yeager!

There are a lot of ways to get a visual after a mastering effect like a limiter. You can add a Bus Depot (use the aux inputs) or any number of visualization modules.

If using Modular Bus Mixers, Bus Depot gives you your sums (mix). And, of course, a limiter on a mix would come on this mix output.

I only used three limiters because Jon said :

Tried that. It limits only the red bus. The blue and orange buses continue to scream away.

If you want a limiter on a send bus, then just create a send effect chain with a limiter before the return. 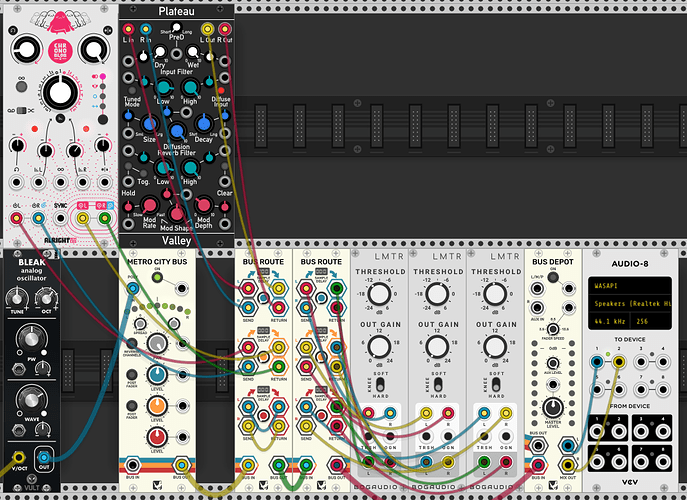 why don’t you put the limiters directly after the send fx (before the return)? no need for an extra limiter chain imho.

but BUS ROUTE has no meters

I purchased CONSOLE a while back, and am completely happy with it except that it takes up a lot of space. I am trying to make myself a fixed Rack that fits on one screen with as little zooming out as possible, so real estate is kind of at a premium. Adding three limiters begins to put me back in the realm of CONSOLE expanse. (Although the concept of applying individualized limiting to the three buses is interesting …)

I will probably just continue to do as the developer suggest and put the Limiter between BUS DEPOT and AUDIO-8. And actually, I have RECORDER wired in there, too, so I can use its meters to make sure I don’t clip the final output.

The latest version of this plugin includes Stereo Out jacks on BUS ROUTE (e.g. for patching to a limiter). I am assuming that if one wanted to this and still use the BUS DEPOT for metering and fade IN/OUT, then an ENTER module must be placed between the limiter and BUS DEPOT, patching the limiter out jacks to one of the channels on the ENTER module.

For monitoring any final output for any stereo source, including a stereo limiter, a Bus Depot can do that with the AUX IN.