Getting up/down one scale degree

I have a voltage quantized to a scale. I want to get a voltage one scale degree above/below. I can possibly think of some workarounds for minor/major scales where steps are either 1 or 2 semitones, but not for custom scales… Are there any modules (quantizers?..) that allow increments/decrements in custom scale degrees? 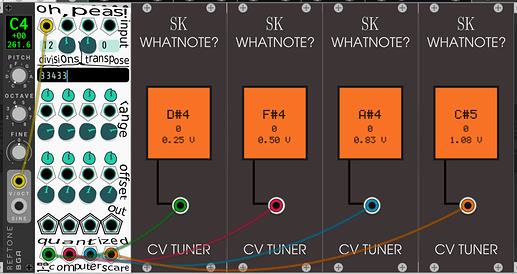 Quantizer with equal input intervals is certainly an awesome idea, thanks! The only problem I see here is that this module uses basically its own numerical representation for input notes (instead of v/oct) so it’s sometimes incompatible with other v/oct sorces (you can feed a note in with zero offset and get a different note out).If only the plugin had a module which allowed backwards conversion - take a v/oct note and output it’s “equal distributed location” based on a scale.

Maybe I don’t understand, but you seem to want to requantize from one scale to another, where the second scale is one degree off from the first, maybe like this…

Can you provide concrete examples of the scales you are working with?

If I’m understanding you correctly, I think you’re exactly correct about a somewhat non-intuitive “quirk” of Oh Peas. It splits up each input octave (1v - 2v, 2v-3v, etc) into equal ranges based on how many scale degrees you have configured via the text input. As you correctly point out, this means that sometimes an input V/Oct CV value will NOT produce the exact same quantized V/Oct output value even if the input note IS configured as part of the scale. This is most apparent when playing notes on a MIDI keyboard. Playing Eb might not output an Eb, but rather a different scale degree.

I think what you’re asking for would be what I’ll call “closest note” quantization? I think this is how most quantizers work. I found equal divisions to be more useful, but I could look into an alternate mode for a future release if you think it would be useful.

@flyingLow no, just one scale. Suppose the scale is Cminor. Hypothetical module I’m talking about converts an input to the output according to an offset. For example: input Eb4, offset 3 → output Ab. Or: input F, offset -1 → output Eb. Your suggestion of “oh peas” is totally fine, but the problem is that added intervals do not actually add to an original note, but instead to another note which is a result of passing the input thru “oh peas” with default settings (which is sometimes the same note, but not always, see computerscare’s last reply)
@computerscare no-no, i definitely don’t need another “closest note” quantizer! The “new module” I’m suggesting works like this: suppose the scale is Cminor. Input is Eb. Then the output is the middle of the third “equal” range, i.e. (2/7+3/7)/2=0.35714285V

If I patch this into “oh peas” with the same scale I get Eb again, which is what i meant by “backwards conversion” (inverse function).

Suppose the scale is Cminor. Hypothetical module I’m talking about converts an input to the output according to an offset. For example: input Eb4, offset 3 → output Ab. Or: input F, offset -1 → output Eb.

Perhaps Bogaudio Stack does what you want? Can Offset any input by a given number of Octaves and/or semitones?

The problem is that the amount of semitones I need to offset depends on a scale and on an input note.

If you are happy with the 14 Scales that instruo harmonaig has, you could use the following patch:

This works at least for the scales with only half and whole tone intervals, I did not test the one-and-a-half-interval-scales, they could be problematic. I used RE-WIN set to “nearest”. Be sure to check in the right click menu of harmonaig, that the correct scale is selected, it is a little bit buggy with saving the menu-options to presets or a strip.

The problem is that the amount of semitones I need to offset depends on a scale and on an input note.

The HoldMeTight S&H+quantizer in Prop mode automatically shift the input value according to the configured (custom) scale. If you have selected a C major scale, and the input is 0Volt it outputs C, if the input is 1/12V then it outputs D, if the input is 2/12 V it outputs E, and so on. So to switch up/down one scale degree you must simply sum 1/12V to the input (using an external adder). The next version (HoldMeTight+) will have also an offset input with an attenuverter to automatically do the sum (I use the same logic in another module and the offset is very useful to achieve pattern variations).

There seems to be the same problem with your HoldMeTight as with my harmonaig-solution… it does only work with scales with not more than a whole-tone as intervals. I think there is a solution but it involves conditional offsetting…

It seems to me that this solution works exactly like computerscare’s “oh peas” and suffers from the same problem: some notes get mapped to other ones. However, one thing I don’t understand is why you write 1/12 V when it seems to me that it should be 1/7V… because there are 7 intervals in Cmajor scale.

Simple answer: use two quantizers, first one chromatic, second one with your scale. Before the first quantizers, add 1/12 volt to go up a half step & 1/6 volt for a whole step. The pitch will rise as you want but stay constrained to your scale by the second quantizer.

If I understand your suggestion correctly, it won’t work for me: I want the amount of half steps added be adjusted automatically, based on a scale and an input note.

it seems to me that it should be 1/7V

Perhaps I didn’t understand your problem. Can you give another example. E.g. if you have Cmajor, and input is E (2/7V) and offset is 4, what is the output voltage (and note) you want?

The problem is that 2/7V is not a traditional v/oct representation of E note. Suppose I use my MIDI keyboard to provide input notes. Then I’m not always guaranteed with getting the right note. An example: suppose the scale is C, D, E as in your manual. I use your solution adding 1/3 to shift one step up. As you can see in the screenshot it works for C, but not for D or E. 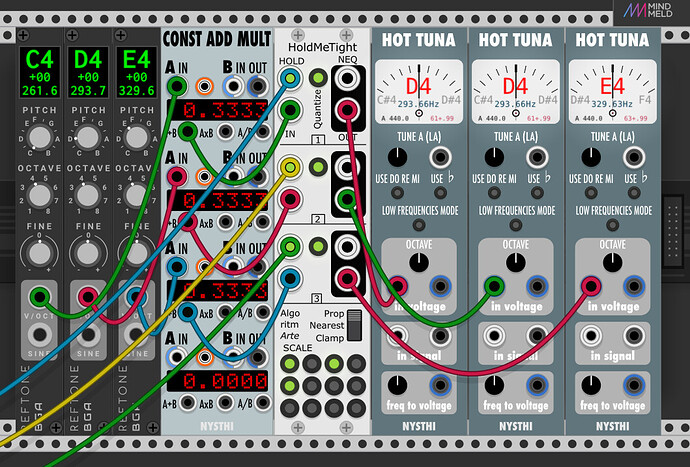 image1059×717 280 KB
That’s why I suggested in my reply to computerscare a module which will allow conversion from standard v/oct notes to “proportional interval note” based on scale. Maybe you will be interested in creating one

Just found out by accident, that aria salvatrice’s Quack Quantizer can offset the quantized signal in scale degrees (Transpose Mode 2).

HoldMeTight seems to be working correctly.

I meant that it’s not working for my task, at least not for every scale.