Here’s an idea I had while patching some synth sounds: what if I routed audio through a poly cable, then sent it to a filter, and modulated it using another poly cable with 16 channels of LFO, effectively producing 16 different filters but only using a few modules? Obviously you need 16 channels to process, so I split off 16 outputs into a Merge utility and it works really well. For modulation, Bogaudio’s Polycon16 with random values patched into the FM input of an LFO will give you 16 LFOs at different rates, for example. I then tried Stocaudio’s Polydelay, which is insane, and the brilliant Vult Rescombe is also polyphonic. Happy days, instant whacky sound effects! Sadly, I haven’t found many more effects that are genuinely polyphonic (i.e. they produce a poly output as well as just accepting poly input, which all modules are supposed to do anyway). Also, a lot of modules are tagged as polyphonic in the library, but aren’t, or at least not in the way I want.

It would be unfortunate if a lot of modules are labeled “polyphonic” just because they can mix poly cables on their inputs into a single channel. But I guess you are saying that’s what they do?

Yep, that seems to be the case. They accept a poly signal as input, but don’t output poly channels.

For example, here’s the output from the Polydelay:

And here’s the Surge Freqshift, which should be polyphonic but only outputs one channel 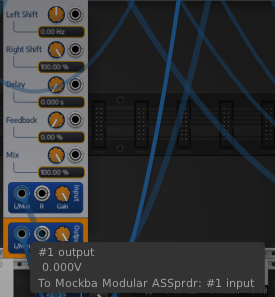 A truly polyphonic frequency shifter would be amazing.

Happy days! I got an email from someone working on an update of the Surge modules, and the effects are hopefully going to be poly.

Also, if you have VCV Pro, check out the new effects modules - as with all the Fundamental series, these are poly too!

Here’s a taste of what you can do with the new VCV Phaser: 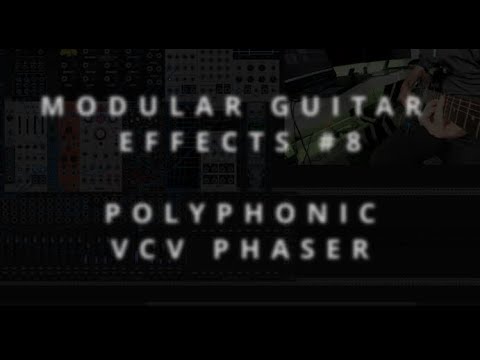 That was a lot of fun. Makes me want to start sending my guitar sound though VCV Rack. My Strat has a Roland GK-2A MIDI pickup on it and I have a Roland GR-55 MIDI synth pedal board, but I haven’t hooked that up in several years.

Thanks! I just use the audio output, I don’t have a MIDI pickup. You can also make a rudimentary guitar monosynth using Nysthi P2V or Entrian follower, but neither of them track particularly well. The proper MIDI guitar system could be good, depends what you want to do I guess. I just like taking a regular guitar sound and processing it into oblivion!

Yeah, I should have clarified that I like your approach since I never was very happy with guitar MIDI. I sometimes run my guitar audio through my iPad with effects and then into the computer and studio sound system.

I have a similar set up, a Roland Fender Strat with a GK-3 into a GR-55 and because it lets you send MIDI and the unprocessed guitar sound it is great to send the MIDI to pass v/oct via VCV to filters to act on the guitar sound. It’s good because you don’t need to worry about latency or tracking so much if you’re getting the real guitar audio.

Many years ago I would send MIDI and audio from the guitar to my Kurzweil K200RS which had access to the DSP in the K2000 and almost anything was possible. That was around 30 years ago now.

50 years ago I was running my guitar through my 1st modular synth (PAiA) and had a lot of fun.

That’s a great idea @main.tenant. You can get a V/Oct from the pitch using a couple of modules, doesn’t always work that well. Another thing I often do is use an envelope follower either to generate a trigger from notes, or to dynamically control effects. For example you can make an LFO speed increase or decrease as the guitar sound decays, that kind of thing. Loads of possibilities really.

@k-chaffin no offence, but you must be even older than me! The K2000 sounds interesting. Modular with guitar isn’t a new idea (I think Pete Townsend from the Who played through an ARP synth in the 70’s, can’t remember if it was modular or a 2600) but VCV does stuff that would be impossible with hardware. It would be nice to see more people making VCV guitar effects!

Thanks @baconpaul, wasn’t sure if I could mention our email exchange on here. Really looking forward to new polyphonic Surge FX, that’s going to be awesome!

I run my guitar through surge quite often for the same reason. You can get some really interesting sounds. And yeah townshend used an arp 2600

@k-chaffin no offence, but you must be even older than me!

Yeah, as far as I know, I’m the senior member here at age 70

I didn’t light the fire, but I fanned the flames

I’m not quite there, but no spring chicken either as my knees keep insisting on telling me.