After some 25 years with softsynths I´ve decided to invest in a hardware-based one. It has been very interesting researching which feature to get and I think I´ve found mine now. But I thought it would be fun hearing what features those of you with hw experience here value.

Here are my preferred features:

That was one of those I looked at and very capable. But I decided to go for something else (not yet released)

But I decided to go for something else (not yet released) That would definitely be my second synth but nothing I can afford in addition.

Beside guessing any features thats a must in hw?

Here are my preferred features:

I think you wrote what I would like to have in a poly as well, 6 voices are fine, 12 are better

I don’t think I will look for more than 1 LFO per voice or more than 1 ENV per voice, but the mod matrix usually is very useful and simple, and (good) internal fx are cool because they are syncable without external gear/cables ecc…if they are crap…it’s just a shame…

I also hate menu diving, I will never buy a synth with few knobs and big menu!

p.s. for me a poly MUST have a 5 octaves keyboard (I don’t know if I would buy a 4 octaves…maybe…otherwise I could go for a rack version…), good quality keybed for sure, and aftertouch of course!

The Deepmind 6/12 are meant to be good starter polysynths for a reasonable price, but there are certainly varied reviews online (cheap, capable; high noise, menu diving…)

Not sure about the Hydrasynth as I’ve never played one

The novation peak/summit are meant to be quite good too, I’ve heard many good things about them, but I’m not sure how they line up in terms of specs/price

While waiting on the Super 6 I tried to look into the stereo oscillator structure of the synth. From the designer´s description it pairs two oscillators (12 voice without, 6 voice with stereo) where the partials are modulated to create the stereo effect. I tried setting something similar using two https://library.vcvrack.com/NYSTHI/Phasor and modulating the phase and detuning. Maybe someone liked to chime on an easier setup?

When you say “partials” I immediately pictured Bog Audio Additator. Might be worth trying, especially being that it’s a polyphonic vco with polyphonic knobs. Like you could modulate each voice differently and the Split the audio output and design the different voices to sit wherever you want in the stereo field.

Thanks for the tip! For me, modulating the filter gave the best stereo effect. Additator in polyphony mode ate my cpu btw

Made an example with 4 partials on left and right channel. Don’t feel I was entirely successful in creating the stereo ‘swirling’ effect from Super 6. 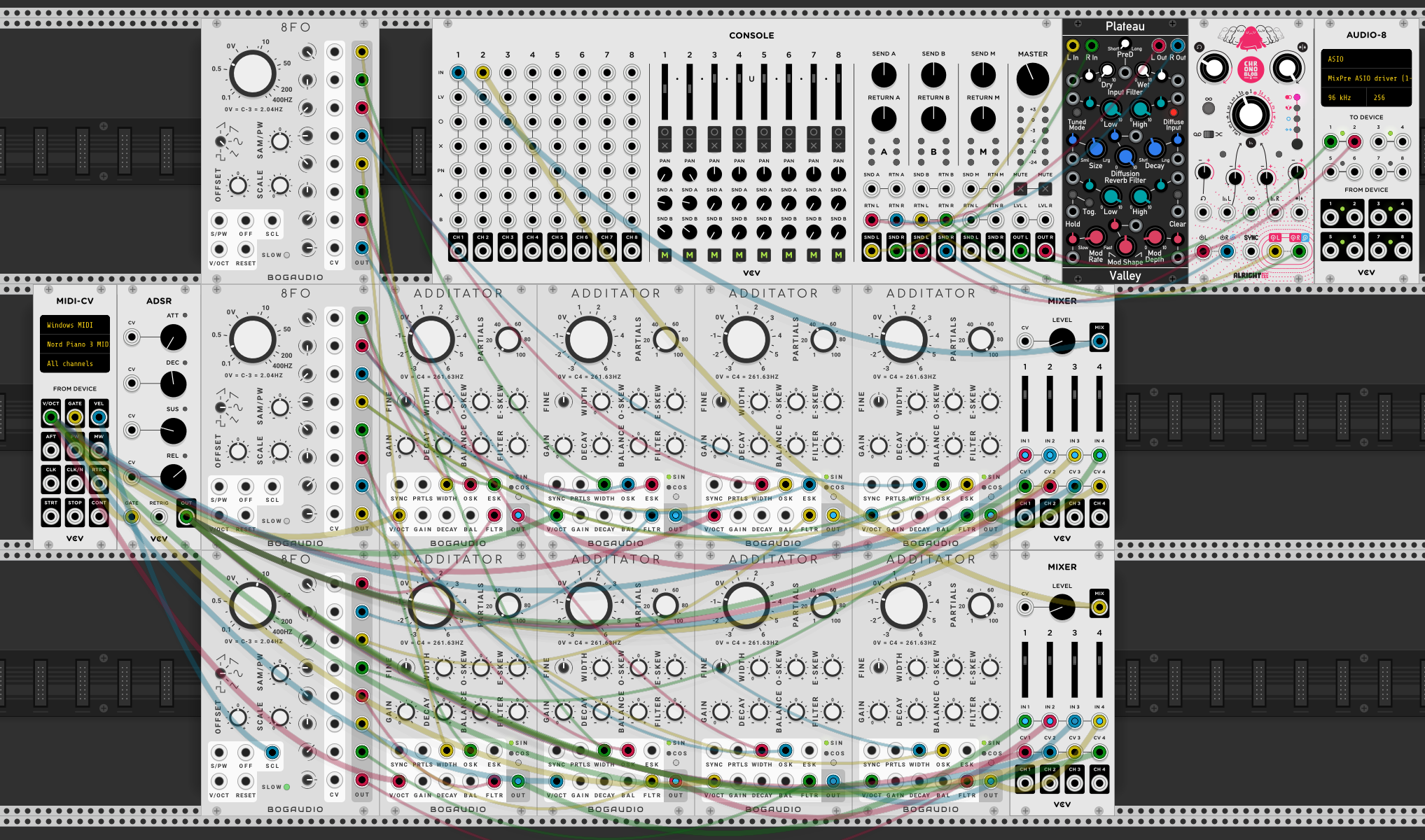 Trying out a stereo vco setup

I’m in the market for a new polysynth with a decent keyboard. The Arturia Polybrute is favourite currently on specs and from reviews I’ve seen, but I’m a little unimpressed my Keylab 88 controller from the same company has just had a key fail with only light use after less than 2 years. And of course it had to be the C4 key that packed in, not something at the far ends of the board.

I suggest visiting a store and try them out with your own headset. Polybrute have two filters and a capable modulation matrix. Prophet 5 will be release as a desktop module so might be somewhat cheaper (but still expensive

I don’t see myself traveling anywhere for months unfortunately. Whatever synth I get will need a keyboard.

There’s some nagging feeling I have about purely digital synths that I can at some point get the same sounds out of my PC and I don’t feel that way with analog.