What is everyone’s process for managing files between VCV Rack standalone & VCV VST?

I’ve lost 2 projects now and not sure what my procedure should be.

Is there any way to get this Live project back? What is everyone’s process for dealing with this situation?

I save ‘DAW patches’ in a separate folder on a network drive. Mainly because I patch things differently to standalone files. I’ve also saved a few ‘DAW FX’ which are kind of mini-effects patches I can load onto a track and use as send FX. I also save loads of copies starting with v1, then v2 if it’s substantially changed, v2.1 etc.

You could try opening the patch in standalone and see if it still works, then maybe start a new project with it in Live? If it’s still crashing, you could edit the .vcv file in v1.6 and remove individual modules until it loads, not sure if that works differently now in v2.

I think you should be able to delete the Rack vst instance in ableton, load up another and open the patch.

One cool trick for those who use Ableton, Click on VST Rack,then Ctrl+G (making instrument rack) then save it and load it later.

Just FYI, VST and standalone are not two different programs. The VST is just a shim that is loaded by the DAW and launching an instance of the “standalone” VCV inside it. Because of the special way VCV needs to run inside that shim, it requires some special practices during plugin coding. There’s no reason to delete a patch that crashes in the VST. Try loading it in standalone mode, then remove some suspicious plugins, then try loading it again in the VST mode.

use SAVE AS in Rack2 VST


It’s not always possible to load a patch created in the VST in standalone.

If the patch was created when VST is loaded in ableton, and saved with “Save live set”, it gets saved in the proprietray formatted .als file - never as .vcv

So there is no obvious way to get to the .vcv patch file for loading in Standalone VCV.

So better use SAVE AS in the VST version of VCV - don’t rely on the Ableton Save Live Set - it uses a binary proprietary closed-source non-disclosed format (actually gzipped xml - the vst patch file is probably the <vstplugin> <buffer> field, it may or may not be gzipped, I haven’t investigated further) 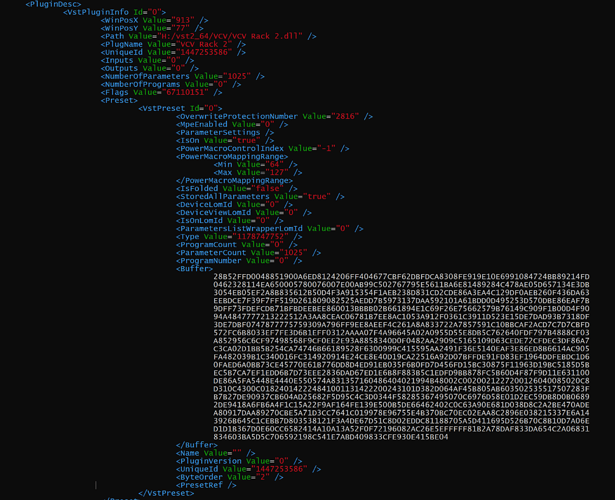 My apologies. I wasn’t clear from the OP that the patch was saved under the Ableton Save and not under the VCV Save as one. In that case I wholeheartedly support your advice. NEVER trust any DAW save operation to save a VCV patch. The DAW was not built for saving VCV in mind and simply saves “state”. Save yourself the agony of loosing work and leave the DAW-save for saving the DAW setup, then use VCV’s Save as to store the VCV patch. This way, you should also be able to move freely between standalone and VST if that’s part of your workflow.

But you were right

I have been using multiple files, creating a file with “Live” prepended to the filename of the Rack patch, intended to be used in Live and untouched in Rack standalone. I should have been more organised though

The original Rack patch still opens in Rack, I just can’t open the Live project. It’s not a lot of work though, so I’m not gonna edit code to get it back.

Will play around with Save As in Rack VST too, wasn’t working yesterday for some reason so I’ll investigate.