Hello there, I have tried out Fehler Fabrik Nova Sampler sequencer. So I have produced 2 tracks with this so far. The 2nd I have used VCV Merge to put a Polyphonic cable into the Input, it does produce nice slices of the sound but the sequencer only seems to run the 6th and 7th steps. Is there a reason why it is only running those two steps?

Here’s the Patch, the samples may/will not be there though! 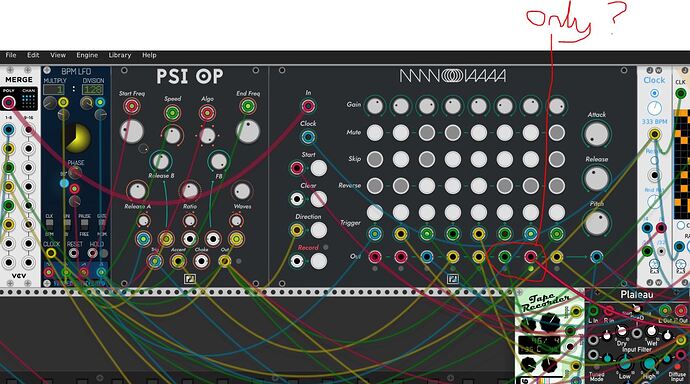 Hey there, it looks like there’s a number of factors at play here that are causing this behaviour.

In this patch, you’re sending signals to the Start, Clock and Direction inputs which will all affect how the sequencer behaves. The primary cause though, is that you’re sending an audio rate signal to the Trigger input of step 7 - this is basically going to be triggering that step thousands of times a second!

The way the code is written, it checks the triggers in sequential order from step 1 to step 8 - this basically means that if you send a trigger signal to all of the Trigger inputs at exactly the same time, it’ll be step 8 that gets triggered, since it’s the last one to be processed. In your patch, you’ve got step 8 set to Skip, so step 7 is the last step. This, combined with the high rate of the signal being sent to it, means it’s basically always being set to overwrite the rest of the sequencer parameters. On the few occasions that it’s not being triggered, step 6 is the next to last in the processing order, so at any given second it’s probably being triggered as well.

If you want the triggers to be more evenly distributed amongst the steps, you’ll need to trigger them with much slower rates using things like sequencers or LFOs rather than audio rate signals.

Thank you Ross, much appreciated. That should solve the issue, I did wonder how the trigger section worked! Now I can loop my samples through a sequencer, this is something I have missed when I moved from Fruity Loops to VCV Rack. I used to use the piano roll to alter the pitch of the samples and then send it to a delay set to manic mode!