I recently came across a few great eurorack modules that work with a internal feedback loop. The Bastl Dark Matter, and the Ritual Electronics Miasma. I really love their sound (especially the feedback ‘fighting’ with the incoming signal like from around 2:30 in the Dark Matter video), and was wondering if there’s any modules like that in VCV (I checked but neither have been directly ported to VCV), or maybe a way to get a similar sound with different modules?

Not an expert on feedback and not sure this is what you’re looking for but,

for feedbacks, I use RESCOMB from Vult :

There’s an Omri video about creating Karplus strong effects where he implies that Rescomb is a delay rather than a distortion.

Where did I say “distortion” ? 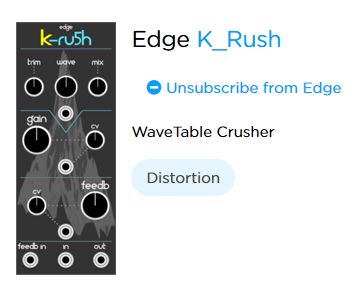 I’ve never used or heard any of those hardware modules in action, but maybe this Edge module could be cool for you? Just patch a copy of the out to the feedback in. Maybe put a LP filter or experiment with different modules in between the out and feedback in.

I’m having fun with rescomb as we “type”

Might as well stream it, so I’m fireing up OBS

edit: the stuff in this post turns out not to be a great idea. You really need to have something in the feedback loop. Check OhWell’s post.

original post: You can use feedback with anything though you do need to be careful. Send your signal into a mixer and then split the output from the mixer into both your output path (another mixer maybe) and one of your other first mixer channels. Insert distortion or whatever into your signal chain where you want it. Also make sure that the total inputs to your mixer are less voltage than the output.

I like using unity modules for averaging levels so it’s not to hot. Works well for me.

You can patch something like this (I’m ignoring the envelope follower part of Dark Matter).

L1 is not strictly necessary but helps get a pumping effect + keep the feedback loop under control. Play with hard vs soft limiting at l1, and with limiter threshold. Another option is to use a clipper instead of l1, but with this style of patch I find the workflow better when controlling all of the distortion behavior from the same module. You could use the same limiter for both the loop and the final output. The point of separating them is to use l1 for shaping the behavior of the loop more aggressively, and l2 strictly for protection in case this gets out of hand. Vult debriatus is fantastic for getting fine control over wilder distortion behavior. But it could be replaced with some other distortion module.

Vult disjoint is a fantastic filter for quick signal shaping. But you could replace it with other things, including a 3 band filter like Bastl Dark Matter.

Edit: From fiddling with this a bit more, it’s probably a better idea to cut L1 and try to control as much of the feedback loop as possible with the gain level at the mixer… (I’d keep the L2 limiter on the final output for protection.)

Thanks for the suggestions everyone! The rescomb isn’t really the type of sound I’m after, and the K_Rush from Edge is pretty cool, but sounds very digital to me. I couldn’t get the type of tones out of it that I’m looking for, compared to the video’s in my 1st post.

Making a feedback loop like OhWell’s example is more like it. I experimented a bit with some different filter and distortion modules, and I really like Blamsoft’s XFX F-35 for the filter, as it has a lot of different options to choose from, and a seperate drive and dry/wet control. For the distortion I like Lindenbergresearch’s Westcoast, also multiple types of distortion possible. I also swapped out the first limiter for a compressor, as it gave me a bit more control over dynamics in the feedback loop. What I like about this system is that it’s very dynamic, it responds different to louder signals than it does to quieter signals (I found that often quieter signals were more interesting).

I did find it difficult to really approach the same type of feedback sound as the video examples. I’m pretty sure it should be possible with VCV Rack to get this type of sound, but I have to do a lot more experimentation

I think a high filter resonance is what gives the feedback loop it’s tone that’s fighting with the original incoming signal, so I think it has a lot to do with what kind of filter you use.

Did you try Vult Tangents for the filter? It self oscilates.

I’m starting to think the missing ingredient in the initial example I posted was self-noise. Feedback distortion techniques with analogue circuits typically use the system’s noise floor as a sound source. (Same as no input mixing.) From the demo I’m guessing the Bastl does that. I’m thinking we want to simulate that with a noise source.

Here’s a more fine tuned example patch that simulates self-noise with Crackle (hetrick). I’m getting much more interesting interplay between the external source and the feedback loop with crackle involved.

Other change: Adding smooth analogue modelled saturation as the final stage of the loop (instead of a limiter) seems to help get closer to the Bastl’s behavior. Squinky Labs Shaper is one of the best options for that (in ‘smooth’ or ‘emitter coupled’ mode, 16x oversampling.)

IMO it’s important to treat the mixer (all the knobs with something in the input) as a core adjustment point for the behaviour. The feedback channel controls the loop’s self-oscillation. The crackle noise channel controls how chaotic the loop’s behavior gets. So you create the interplay with the external source by fine-tuning how much noise vs self-oscillation it has to fight against. 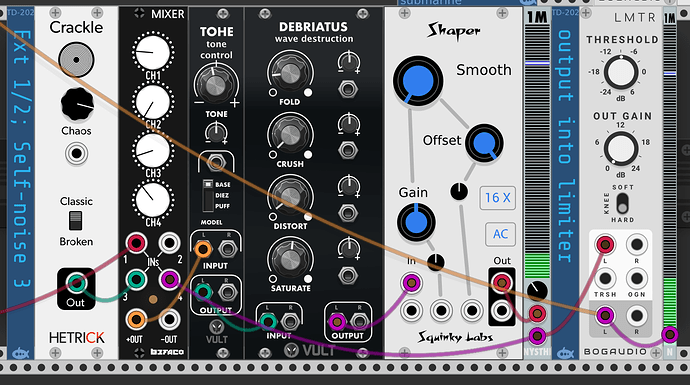 EDIT: Getting obsessed (thanks for this puzzle), here’s my favorite strange pumping so far. Feedback Distortion Patch2.vcv (29.5 KB)

Since we’re generating the feedback with the whole chain, I’m starting to think we don’t want the filters to self-oscillate—at least not as a starting point. From my limited testing, self-oscillating filters seem like they override the interplay between the noise (see my previous post), the external input, and the feedback path’s self-oscillation too much.

I think you’re right OhWell, the self-oscillation is a different kind of ‘distortion’. And the noise adds quite a bit to the feedback sound. I also experimented with different kinds of noise, with Bogaudio’s noise. Thanks for the patches, these are really fun to play with! I love it

Side note, I’m blown away by the mileage I’m getting in the loop from using 2x disjoint in series as filters. The default strategy is to create a custom bandpass. Use resonance gently to create different curves. It works really well to help shape contrasting zones of distortion across the frequency spectrum. (E.g. growl in the lower mids against higher pitched spikes…)

Squinky Labs Shaper is one of the best options for that

Thank you! We do think that Shaper is a pretty versatile distortion box. Thanks for mentioning it.

I think We’re close but no cigars… I came here with the exact same question, so real happy with the results so far. I wasn’t able to reproduce the warm sounds of the Dark Matter, tho.

I found the manual for the Dark Matter, so when I have some spare time I’ll try to implement their schematics. Some stuff i’d like to try: Use the mic-input (with nothing connected) on my sound interface a a basic input for the feedback loop It looks like the signal is now filtered, instead of augmented with a bass and a treble signal, so I’ll look at that I’d like to have a central controller module that works like the panel, with all the attenuation happening in the guts, so the contoller stays in playable levels.

We’ll see where we are after that.manual-dark-matter.pdf (2.5 MB)

I’ve been playing with this a little, I’ve sort of copied the patches in this thread but added distortion and filtering to the feedback path, as well as an envelope follower. I think a pumpy compressor in the chain somewhere might help. 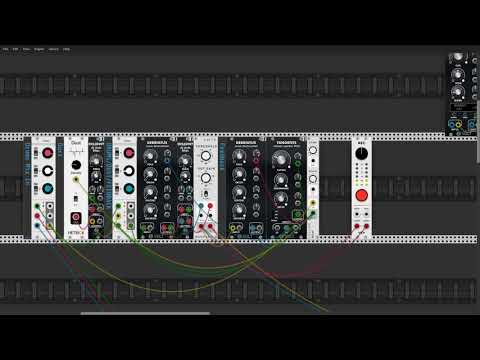 Sorry for reviving this old topic Troubledmind, but this is really awesome, could you please share the patch notes / patch? Tried to recreate is but didn’t work out… thx! I could share the patch how I have it now. (Fairly new to VCV)

Hey no problem! I didn’t save that patch (or not that I can find) but I’ve recreated it and saved it as a selection so you can import this from the File menu in Rack 2.

You’ll need Vult free, Submarine, HetrickCV, Audible Instruments, Bogaudio, JW. The bottom row is just some drums to get you started but replace it with whatever you want to throw in the loop.

If you have any questions then let me know. It’s pretty simple really, especially if you remove the Bogaudio Follow module as that makes the connections look more complex than it is.