Even though I open rack in low resolution mode, I think my laptop is gonna take flight whenever I run it. I have a brand new Macbook pro…

I run an extra display…

Is there something I can do to keep my laptop fans from freaking out every time I run rack?

Try going to System Preferences > Energy Saver and unticking the Automatic graphics switching option. This will force your Mac to use the Radeon Pro graphics card instead of the Intel UHD graphics card. Rack runs better on, er, better graphics cards. 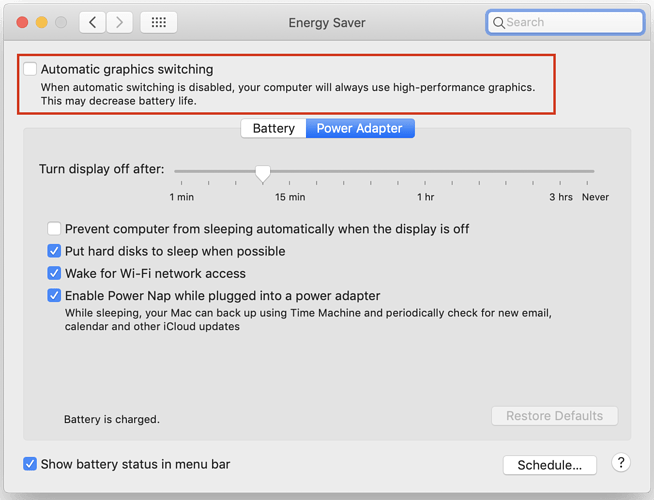 I will try that thank you

As has been mentioned in many threads and conversations about Rack performance, there are three characteristics of a computer that determines whether Rack runs well, and the size of the patches you can build. Rack requires these three things from a computer: The highest possible single-core CPU performance. You can find a list here. Good graphics (aka. GPU) performance, which means a discrete graphics card in the computer (e.g. Nvidia or AMD) rather than builtin Intel graphics in the CPU. It …

I don’t like to be the bearer of bad news but if you have bought it to run Rack you are out of luck. The cooling systems in recent MBPs are completely inadequate for sustained processor CPU & GPU loads.

BTW the extra display will only make it worse because it forces the GPU to push more pixels = more heat.

Does placing your MacBook Pro on one of those laptop fan stands help? 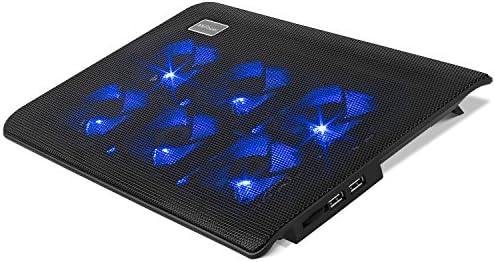 They are good. Many are intended for use on a desktop and have legs; if you want one for your lap this is a good one: 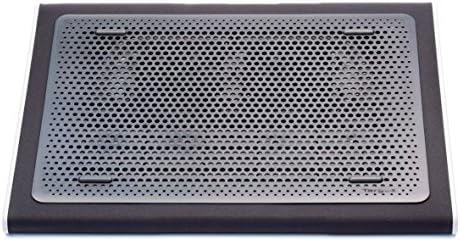 One thing to note is that the fans can usually be powered from USB on your notebook BUT if you do this that increases temperature in and of itself. It is better to attach them to a separate USB power source.

@LarsBjerregaard I applaud your re-posting this information. It really helps to reinforce the stuff that many of us “old timers” know but newcomers keep tripping over.

On small issue that is maybe not true anymore - I think you say only single core performance matters, implying that number of cores doesn’t? That was of course true in 0.6 and not nearly as true in 1.0, correct?

I applaud your re-posting this information. It really helps to reinforce the stuff that many of us “old timers” know but newcomers keep tripping over.

Thanks Bruce! Yeah, this is where ideally VCV Rack would have a dedicated Wiki, to gather and writeup semi-permanent information, so people don’t have to trip over the same old things. This forum and searching is certainly better than Facebook, but it’s no substitute for a Wiki and it will always be fragmented to a certain degree.

On small issue that is maybe not true anymore - I think you say only single core performance matters, implying that number of cores doesn’t? That was of course true in 0.6 and not nearly as true in 1.0, correct?

I think that if Rack could spread it’s load perfectly over an arbitrary number of cores then yes, it wouldn’t matter. However… as I understand it there is quite the overhead for multi-threading in Rack and this can be easily observed by taking a moderate patch and cranking the number of cores from 1 to 2 in Rack. The machine CPU consumption instantly goes up by a good amount. My gut, totally unscientific feeling is that you gain maybe 30% increased patch capacity for every core added, but your cooling system better be up for it. So in the light of that, I think single core performance still very much matters. A single core is by far the most effective way of running a patch, but multiple cores increases the headroom of the biggest patch you can run on the given machine. Given that we all have 4 or more cores in our machines these days, I don’t think the number of cores in your CPU matters very much for Rack, it will still be down to the performance of each of those cores.

Oh, you are completely right here. My observation (colored by guessing how it works) is that every CPU you allocate to rack immediately goes up to 100% usage. Or close to it. Even if VCV isn’t doing anything. In contrast to must audio software where you can tell it to use all your cores, but it will only use as much as it needs. On my 4 core if I allocate even 3 to the engine and set them to realtiem my computer gets unresponsive.

I suspect it’s maybe a side effect of Rack doing processing one sample at a time (which is a great thing for a modular). Can’t help wondering if it could be done with less “wasted” CPU though.

That said, if you nave an “n-core” machine, isn’t it OK to give rack n-2 of the cores? I believe (but haven’t really verified) that more cores do help VCV quite a bit, but you need to be careful.

But, usual caveat, I don’t use back patches on Rack much. I tend to make small patches to test my own stuff.

Yeah. I think Andrew said something like this, and it makes perfect sense to me, that the optimal way of using multicore on Rack is to start with 1 thread, and only when you start to get choppy audio you add another thread, etc. Rinse and repeat until your CPU has a core meltdown (pun intended)

Run VCV Rack in low resolution mode by going to Applications, right clicking on Rack and selecting Get Info. Tick the Open in Low Resolution box.

Not true since the addition of HybridBarrier in Rack v1.0.0.

Oh, nice. Thx for the update and sorry about the misinformation.

Maybe a different way of formulating all of this, that would be useful to some people:

frame rate limit is not in this file… do I just add the line?

It’s in the View menu in the latest version