Fake Telephone Voices For a Play

I needed some fake telephone voices (male and female) for a somewhat farcical community theatre production of “The 39 Steps”. Something like the Peanuts “adult” voices (played on a trombone), or the Fisher-Price “Chatter Phone” pull toy. The Peanuts voices are too short, and the Chatter Phone had a too-short repeat rate. Plus, I needed both male and female voices, with the female voice being more angry and/or panicky.

I decided on making use of the Audible Instruments’ “Macro Oscillator” module, set to “VOWL”, throwing in a number of Random CVs to modulate frequency, timbre, filtering, volume, tempo, etc.

The Slope Detector is there to make it favour occasions when the frequency is going up. Otherwise, it came out sounding somewhat like Cantonese speech. 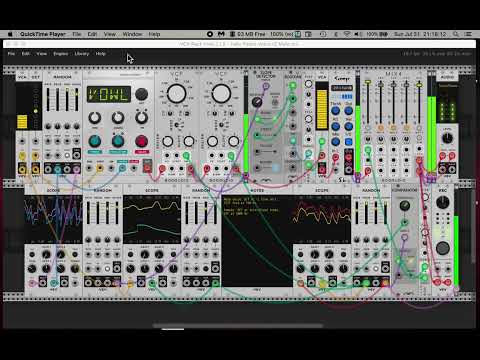 Bravo! I love these posts about how you are using VCV Rack in the service of theatre. I think this one is particularly clever (and successful).

I think this one is particularly clever (and successful).

I was pleased with it. It had the advantage of being as long as we needed for the actors to get through their lines, and then some. However, the director did not like my “long drop whistle” (to be followed by a splash). It was too “breathy” or something, and he wanted a recording of a real slide whistle instead. I kind of agreed with him, since real slide whistles have a recognizable quality that is associated with comedy. It was the kind of play where the author would call for stuff like “canned applause”.

The only thing I don’t like about theatrical sound design is that playwrights (my wife included) seem to forget when to turn sound off, like “wind” that seemingly goes on for pages and pages of script.

forget when to turn sound off

For sure. I’ve definitely been to productions where otherwise successful effects have overstayed their welcome and become quite distracting. Much better to establish the scene and then let it fade, so we can focus on the human drama (or comedy) unfolding.

Hope it’s ok to ask, is this patch available for download on here or Patch storage? Would love to play around with this. Much appreciated.

Yeah this thing is killer. Built it from the image. Thanks John. Using Macro’s optional META: FM CV selects model, plus any other strange assortment of effects, there are a lot of possibilities: The droid disassembly room from Empire Strikes Back. A very bad situation as heard over a police scanner. A spaceship full of alien cats in heat. For something potentially more musical, the result of just simply switching the model to snare is cool. Reminded me of someone walking a gravel path in an old radio program.

It was a big production for me to figure out how to get it there, but here it is - Fake Phone Voices | Patchstorage

Oh. It just occurred to me that when I say in the “Notes” module how to change the voice from male to female, I say to change a setting of VCF, but there are two of them in the patch, and I forgot which one it was. Then I looked at the video and it doesn’t appear that I change either VCF much at all, only the OCT module by 1 octave.