However, I’m getting extra sidebands across VCA modules. Only one module I’ve tried seems to work correctly.

Here is a minimal starting point, no AM. Two wave table oscillators are producing sine waves at 60 and 400 Hz. Wavetable VCOs were chose to give perfect sine waves with no additional harmonics. As you can see in the scope, there is only one harmonic for each: 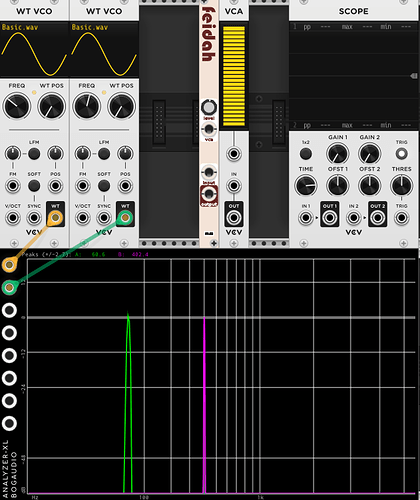 If the fundamental VCA is used for AM, additional sidebands appear at sideband harmonics (multiples of 60). The direct connection to the scope has been left here because the color contrast clearly shows the carrier present in the VCA output: 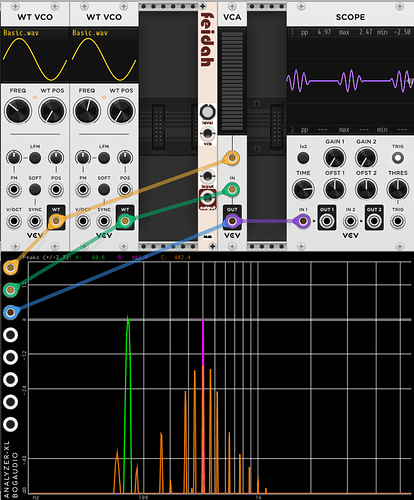 Extra sidebands appear with VCAMP, though not as many. This could be due to just a difference in gain: 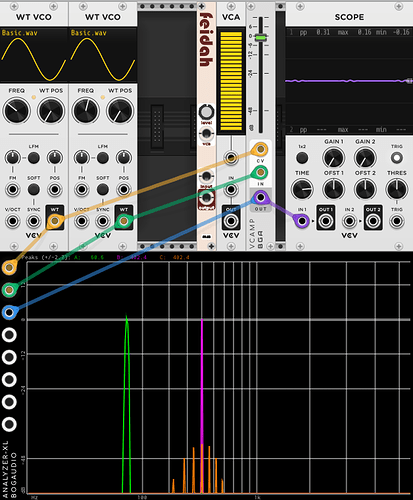 I’ve tried a bunch of modules, and the only one that works as expected is AMP (I’d show, but I’m limited on how many pictures I can post).

I’m wondering if there is some analogue circuit emulation that is creating extra sidebands with most modules?

That is because your modulator is bipolar, so you are effectively modulating with only the positive portion of the sine wave. That absolutely should introduce many additional frequencies.

Simply offset your modulator by 5V to make it unipolar.

It this section had a “solved” button, I would push it. I guess things in “plugins & modules” can’t be “solved”? After all these years I still don’t quite understand this forum…

I just checked and verified that Plugins & Modules stills allows “solved” selection. But aolney hasn’t responded since his original post.

I did not consider that modulating with the positive portion would create distortion.

I suppose a better question would have been - why is AMP working as intended despite this? I might have a look at the code.

PS I’ll check my notification settings to see if I can get emailed so I don’t miss responses in the future.