I was using the Quad Algorithmic Rhythm to create some more creative percussive sequences. The sequencer is repeating itself every 8 beats in sync with the master clock.

I figured that I could use a phased square wave with 25% pulse width. So, I used the BPM LFO 2 with the 8VERT attenuator. By manually fine-tuning the attenuator and manually setting the SLOPE and PHASE parameters in the LFO, I manage to get what I want.

After that I also wanted to introduce some change further down the line, let’s say between the 121st and 128th beat. I set up a new LFO, but soon realized I had to update the other LFO as well, or at least merge the signals (a simple MAX was working).

Anyhow, I found this a very tedious process, especially setting the attenuator to the exact level corresponding with the value I wanted in the Quad Algorithmic Rhythm. Is there a VCV way to make this easier?

Another question is: should I use a gate sequencer + clock divider to introduce these periodical changes?

Once again, thanks a lot for your time! 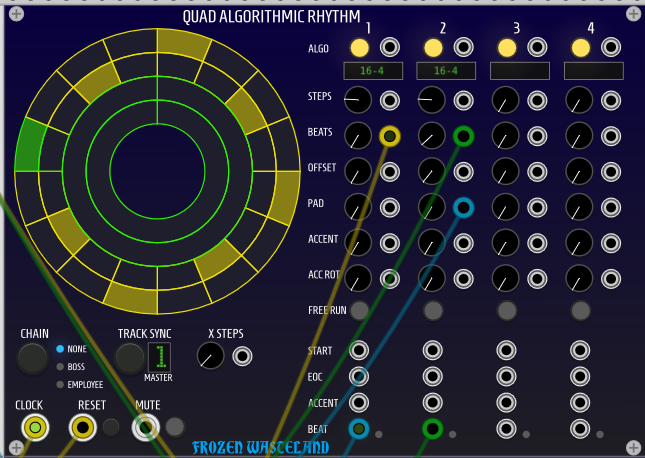 NYSTHI’s Janneker and Jooper might be helpful. The first allows things to happen at particular times and the second lets you make switches between inputs and outputs. This way you could use the same developer’s Fixed CV module to send the values you want and automate the changes when you want.

Have a look over the tutorial here.

Thanks for you quick answer!!

I took me a bit to get Jooper working, but it does the trick. I will experiment further with the scenes and Janneker to further automate changes.

The only annoying thing I notice is that the D INPUT column does not seems to pick up the input signal.

Here everything works as expected. 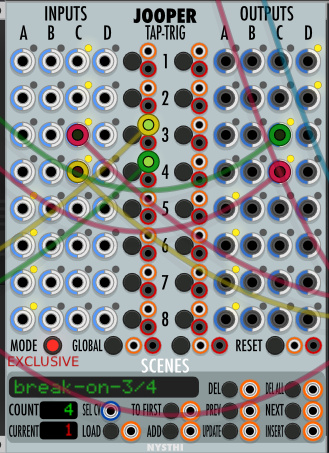 While, here no output signal comes through: 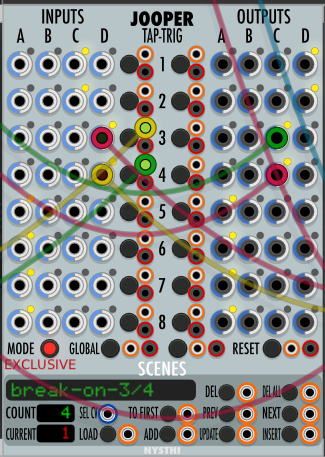 I’m not at my vcv equiped computer until tomorrow but I think Exclusive mode only routes the ins to the corresponding outs, although I could be wrong about this. Try in the multiplexer mode, that’s what I usually use and it works as you’re expecting.

Thanks. I will experiment with the Multiplexer Mode.