Also, while resetting everything on Clocked, I can’t get Entrian Drummer to reset to phrase 1.

You need your sequencer to output a C3 for Phrase 1, C#3 for Phrase 2, and so on. Here’s an example using Seq++. You can see that the highlighted note is a C3, selecting Phrase 1: 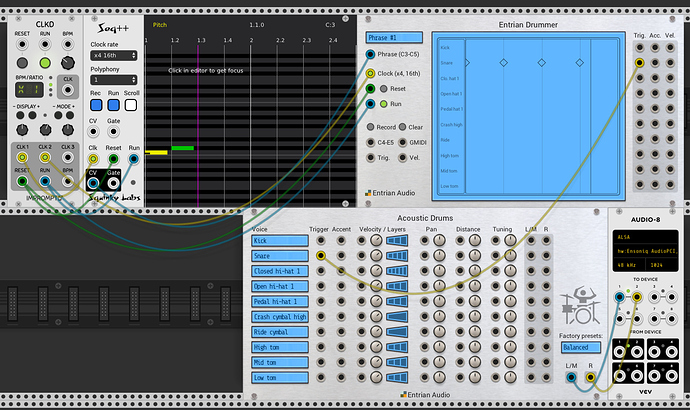 The Seq++ sequence is two notes long, one for Phrase 1 and one for Phrase 2. The clock to the Seq++ is going at a quarter the speed of the one to Drummer because the patterns are four beats long.

Resetting the phrase will happen via resetting the sequencer - it will select the first phrase in its sequence on reset.

Not really getting the same effects as stated. 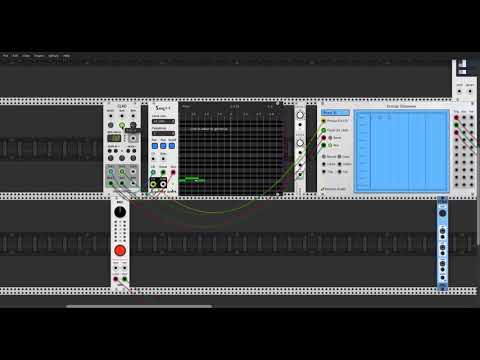 OK. so there are (I think!) three problems here.

The first problem is that that you have the “Phrase CV/menu” option set to “End of phrase”, which is part of the reason why there’s a big delay between the phrase being selected and actually playing. You need to set that to “Instant” (it’s in the pop up editor).

That almost makes it work, but not quite; the first note of each phrase comes from the previous phrase rather than the current one. The phrase selection is happen slightly behind the clock.

That’s the second problem, and it’s because of the 1-sample lag introduced by each wire in your patch. At a time T, the clock fires and Drummer plays the next beat, but the sequencer’s output doesn’t update until T+1, because there’s one wire between the clock and Drummer, but two wires between the clock and the phrase input. You need to compensate by adding a 1-sample delay to Drummer’s clock, as in the patch below.

(This is a common problem, hence the existence of Bacon Music’s SampDelay module.)

But the third problem is that a 1-sample delay isn’t enough when you’re using Seq++. It seems you need 40-odd samples before it works. @Squinky: is it possible that the output from Seq++ is delayed by 1ms relative to the clock?

If you use Entrian Melody to drive the phrase changes, that works with a 1-sample delay: 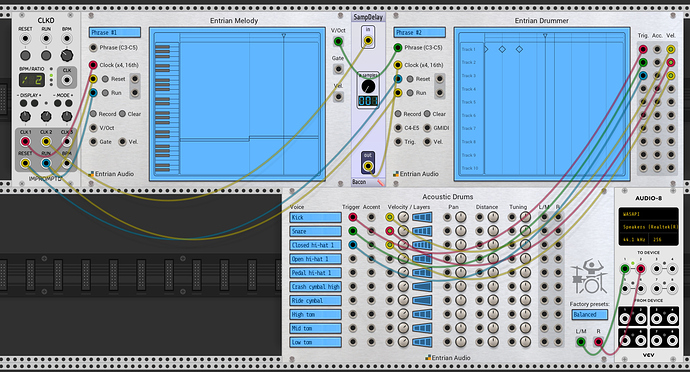 (I haven’t tried any other sequencers.)

Thanks for the info. I’ll check more into it.

Love these modules because they get the sounds I want quite quick while having one of the best editors out there. I just don’t know why i was struggling to get some phrase changes. Haven’t used Rack in a while.

I had it working pretty good last night(Not sure what I did) but then Host crashed my patch.

delayed by 1ms relative to the clock

I’ll have to check. It may be delayed by up to 4 samples. Will look into it, tx.

Coming back to this, this weekend, I’ve yet to get this working. When do you expect Entrian Melody to be updated with labeled keys?

Are you using Linux for development? Are these builds getting tested in Windows?

Going to the 3rd phrase in the editor, the channels are not renamed like in phrase 1 and 2… in Entrian Drummer. Seems like 3 and the proceeding phrases.

Bug: While switching phrases, you need to reset the actual module on screen so they are re-labelled. Change the phrase, move the module itself to Entrian Acoustic Drums and it’s re-labelled.

Still doesn’t fix my phrase sequencer issues though. I can just use a clock to adjust the length of a sequence but would really like to use Entrian Timeline.

When do you expect Entrian Melody to be updated with labeled keys?

Probably the first week in September, but drop me a DM if you’d like a pre-release version.

Are you using Linux for development? Are these builds getting tested in Windows?

I develop on Windows, and test on both Mac and Linux before a release.

I’d like to get to the bottom of the problems you’re having, but from your description I can’t make it go wrong. Could you DM me a patch and some instructions?