Dysfunction of some modules / effects with audio interface

TL;DR: some specific effects on specific modules don’t properly process the input from the Zoom U-24 on my M1 macbook. Is there a way to fix this or should I return the interface?

VCV has no problems recognizing the audio interface: 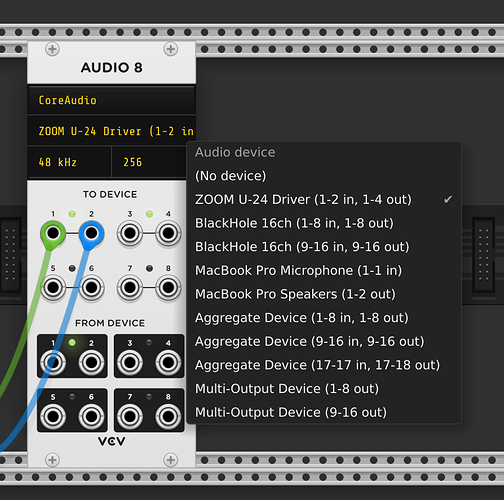 The audio works and sounds fine when I don’t use any effects. Some effects modules also work fine, for example: VCV soundstage, VCV delay, Vult Tangents.

In other modules I run into problems however. At first I thought it might be a problem with specific modules, but it turns out to be only a problem with specific effects on specific modules. For example, the module Debriatus from Vult works fine, when I dial up the saturation there is a clear change in the sound and it works fine. However, if I dial up the distortion, suddenly the sound disapears, and if I play very loudly suddenly the sound reapears, but not in a reliable way. Here you can see the difference between no distortion (above) and with distortion (below). 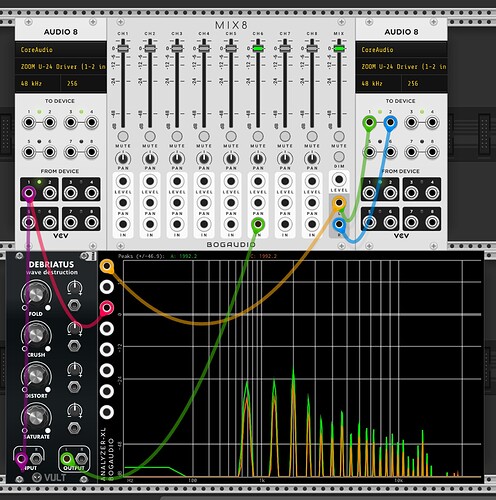 It’s also not the fact that distortion somehow isn’t possible, for example the disto module by cf works without problems…

Any explanations? Could I fix this somehow? Should I return the audio interface? If so, which other audio interface with two inputs and compatibility with electric guitar / violin would be recommended?

I am not familiar with using VCV on a Mac, but the first thing I would check is using only one audio-8 module (or the audio 2).

I can’t see how the interface can be incompatible with a certain module, either it’s passing sound to VCV or it isn’t. More likely a certain combination of settings cancels out the gain on that particular module. I’m on Windows and a completely different interface, but can test it for you at the weekend? I use tons of modules as effects with guitar and I’ve never seen this (although I’ve had a few modules dying and suddenly not producing any output at all - that’s a different problem). One slightly glib solution would be to use a different module!

Good suggestion, thanks! Unfortunately one audio unit or the audio 2 gives the same problem: 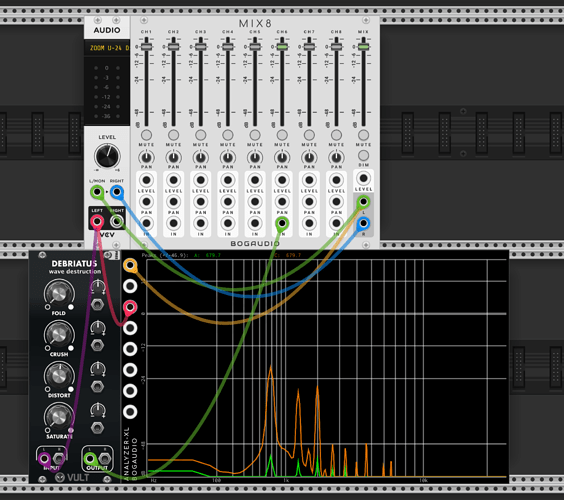 It’s weird right?? I also don’t see how it makes sense, but somehow it is happening, as the screenshots show… I never really tried fidling with the settings. Any idea what settings I could try changing?

One slightly glib solution would be to use a different module!

If I new for 100% that this module would be the only problem, I’d be okay with that, but I don’t feel like taking the gamble only to find out later that with some new version or something the unit stops working completely…

The only other thing I could think off, where eventually modules react differently to, is DC-offset. You can measure DC-Offset with Autinns DC module. Misc · NikolaiVChr/Autinn Wiki · GitHub

Maybe your interface somehow introduces DC-offset? But that is just a wild guess from me…

Thanks again! If I run the signal through that module first I get zero signal: 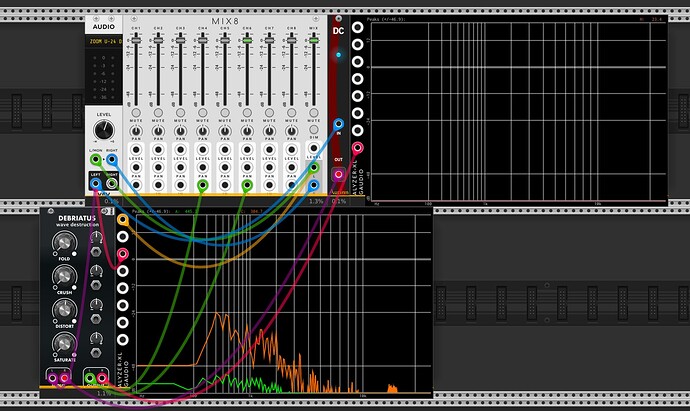 (I put it in a separate analyzer to make sure that there was no signal, see upper right analyzer…)

Sorry, that Module is not a DC-Blocker, but a way to analyze if there is DC. That’s why I linked the manual

If you want to try it like you did, you need a DC-Blocker, Nysthi or DocB for example.

But I see the DC module shows a blue indicator and that means there is a negative DC offset.

Ah thanks! Sorry didn’t get it the first time. I tried using the Nysthi DC blocker, but it doesn’t solve the problem: 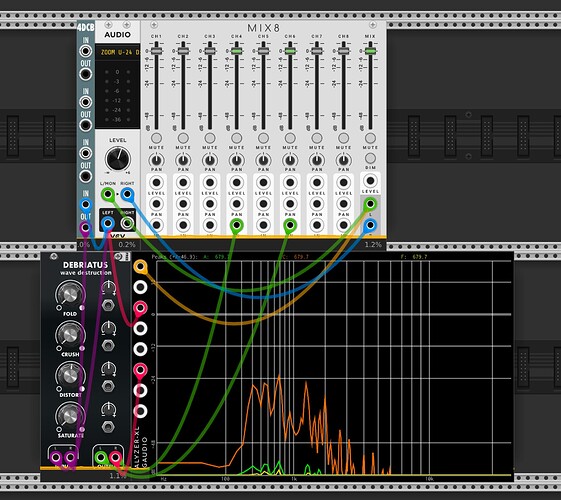 (The DC blocked signal is in yellow)

Ok, but I am still wondering why you have a DC-offset on the audio-input

I really wouldn’t know either… Thanks anyway for the suggestions!

Actually I’ve finally decided to return the unit. I wish there were some overview somewhere of which audio interfaces work well with VCV and which don’t, because I’m reading many conflicting experiences here on the forum. Maybe I’ll start a thread where people can post their experiences with interfaces to see if we can create some sort of overview.

which audio interfaces work well with VCV and which don’t,

I have a hard time believing that some audio interfaces should work better/worse with Rack. Now… drivers (for them) in Windows, yeah, that’s a whole other kettle of fish - one of the reasons I’m glad not to be on Windows with its “bad driver hell”

Unless I’m missing something, I believe you’ve discovered a bug in that particular module, Vult Debriatus. You could file a report on the developer’s github page here if you were so inclined: Issues · modlfo/VultModules · GitHub

Funny enough, first problem with an audio-interface I ever encountered, was when I tried to get my Steinberg UR-22 (mk I) connected to my IPad - welcome to “no driver at all - hell”.

But I agree with you, the Zoom should work with VCV.

I don’t think it has anything to do with Vult Debriatus itself. You could try it for yourself. Take a VCO, set it to Sine with 200Hz and put that through a bogaudio offset and then into the vult debriatus. Set Distortion to 0.5. A scope will show you the 200Hz at around 0DB. Then introduce an offset of -5V to the audio signal (so add DC offset). The Fundamental note of 200Hz on the scope will reduce drastically.

A Distortion is (speaking as a guitarist, not a programmer or an audio engineer) a clipping circuit, sometimes with asymetrical clipping (top half is clipped in another way then the bottom half). Maybe Debriatus has nothing to clip, when used with a signal with that much DC offset and therefor behaves in that way. That would explain why some modules work and some don’t.

Edit: Yes, it is asymetrical distortion, Yellow is without DC, Red is with DC:

The analyzer is showing a very small amount of dc. Plenty of modules (like Fundamental VCO) output a lot more.

Yes, it will be difficult to convince anyone that this is an interface issue.

The output was never problematic. The input to Debriatus was reacting to DC… and that’s what’s shown on the analyzer and the scope.

I believe you. I just didn’t see that much DC on the analyzer. Which shot are you refering to? And have I mentioned how much DC is on most VCO? 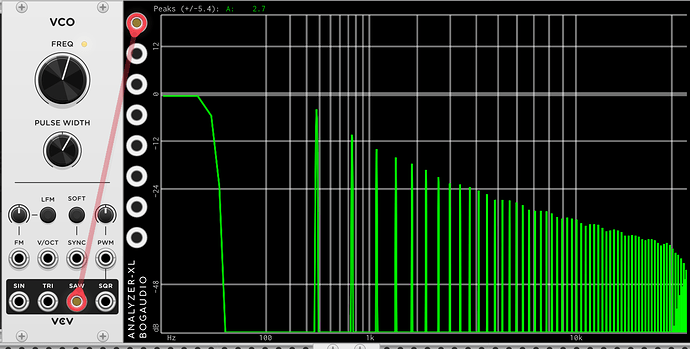 I should probably update my paper on DC. It sort of mentions that effect, in passing, but maybe I could strengthen it.

This file has been truncated. show original
1 Like
next page →