The HexSeq (and HexSeqP) is a trigger sequencer that can create patterns of length 64 in multiple of 4. It works really well as a simple clock divider if you need many different divisions. HexSeq outputs up to 12 simultaneous clock divisions, and HexSeqP up to 16. It also is very kind to your CPU

Programming a clock division is as simple as specifying a string of hexadecimal characters that specify a bit pattern that represents a trigger every Nth clock pulse.

There are three ranges of division coverage density:

Here is an image of a simple patch that provides a huge variety of common musical divisions. I opted to use Impromptu Clocked as it readily shows the math behind the construction. But you can substitute any clock that provides 24 ppqn, with additional outputs for your bar and phrase clocks. 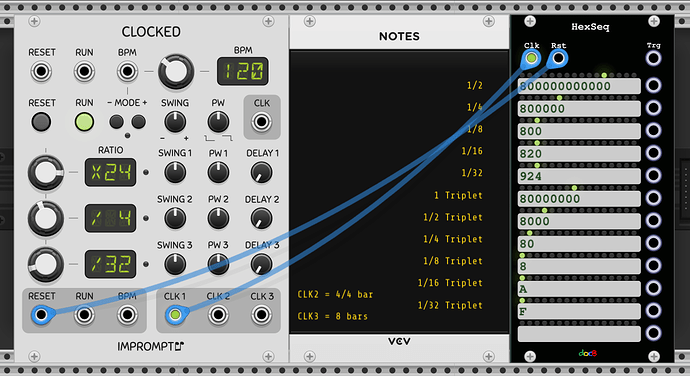 Very cool, thanks for sharing

One man’s simple is another man’s… erh, inscrutable? But cool.

r u really supposed to program this as a trigger sequencer by converting binary to hex in your head? I mean, I could probably do that, but it seems… odd?

The manual has the bit patterns of each of the hex digits. So it is not hard with that in front of you. I’m thinking it would be nice to include that in the menu system. Or better yet, I think there is room for some buttons in the upper right where you could enter hits and rests, and it could write out the corresponding characters, for you in the currently selected slot.

It is nice to have a relatively compact module with the ability to have so many trigger sequences with up to 64 steps each.

it’s true there are already plenty of trigger sequencer with big panels that have a “normal” ui… this one seems awfully esoteric, but it ppl like it, that’s cool.

@squinky It’s esoteric, mystic, irrational, complicated, and a pain to modify once you patched everything but I also feel attracted to HexSeq.