So I’ve been messing around with VCV rack now for a bout a month and I’m sort of getting the hang of it at a really like…“One voice one sequencer and a few effects” kind of level. The thing thats really twisting my brain is remembering or figuring out the IN/OUTs to use to just get certain modules to functin correctly. It doesn’t really help that every different module is like hella different with custom CV inputs for every little aspect of everylittle thing.

It especailly gets confusing once I have a bunch of cables and a handful of modules running. I’ve tried finding flow chats, block charts, diagrams or cheet sheets but just cant find anything thats very clear, I guess.

IIs there a resource anywhere that possibly llits the various kinds of input jacks, what can be broken out or in to from or to different I’s/O’s llike a reference sheet or somethin?

Look no further than @Omri_Cohen on YouTube an patreon. He specifically added diagramms to every patch in his comprehensive collection of patching techniques.

Given the nature of modular there is no cheat-sheet that can cover the entire bandwidth of possibilities.

You might want to have a look at the following pages for documentation of patches. 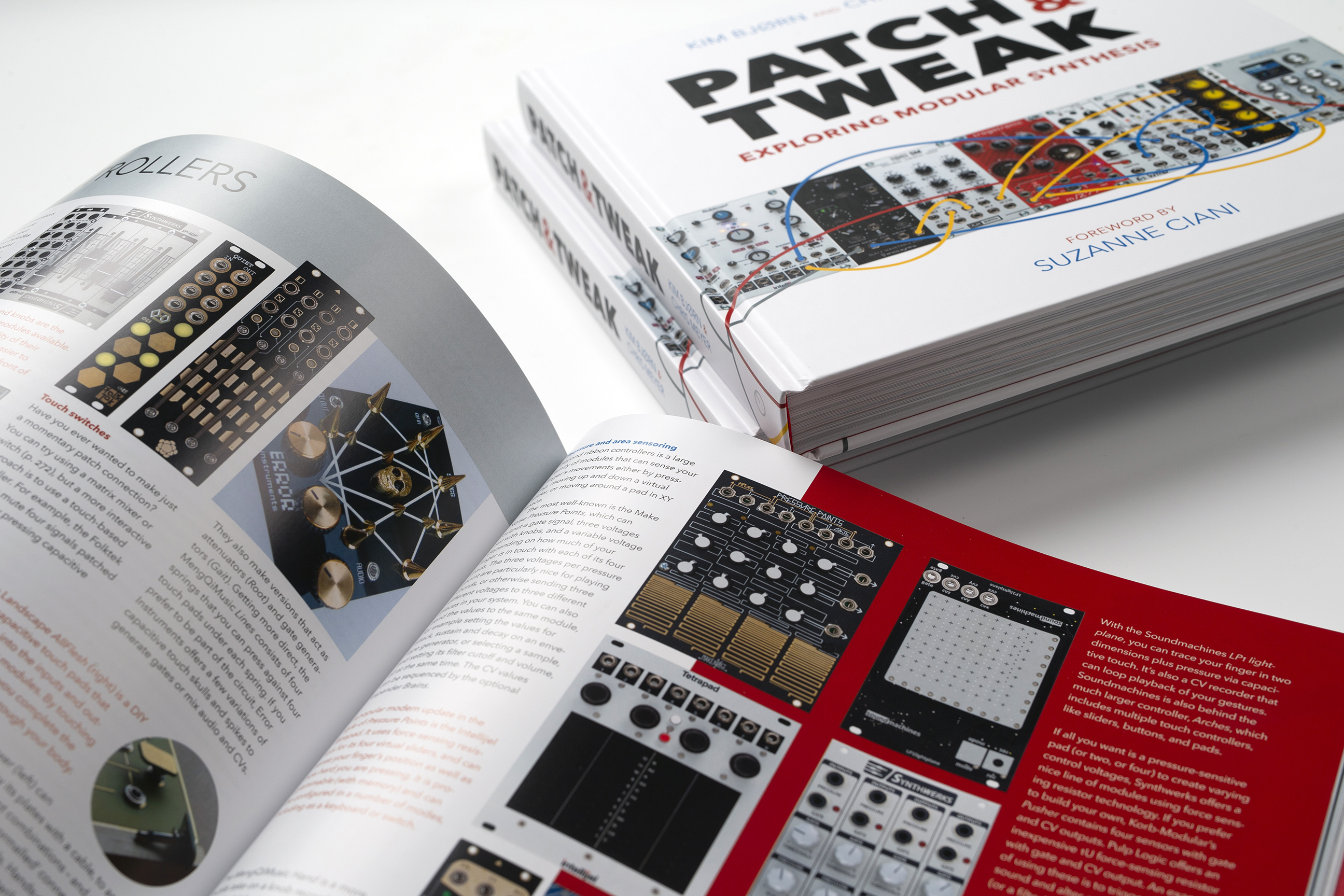 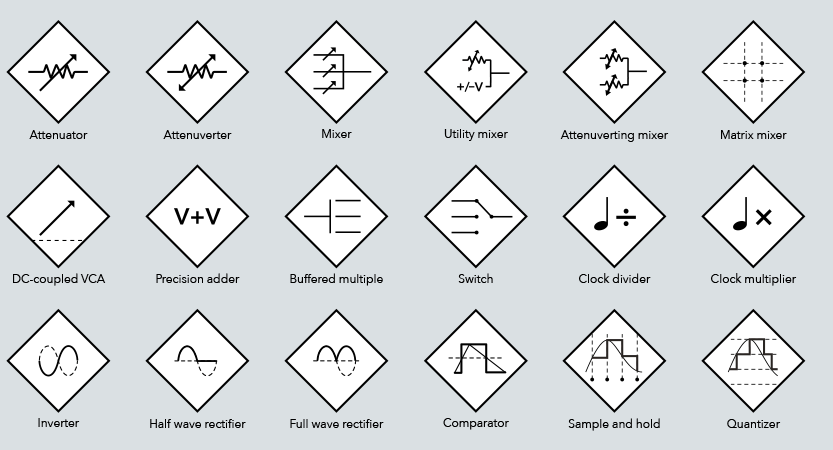 This was something I was hoping the new tool-tip feature introduced in v2 would help with.

I was hoping developers would use jack tool-tips to indicate things like acceptable voltage ranges for example rather than just - in many cases, a repeat of the panel label. Sometimes it’s not needed, but some modules could really benefit new users and perhaps more experienced users with new modules - especially since many either don’t have a manual at all or one that could use a little more information. As it is, I have seen more experienced Rack users here in the forum ask the question “What is the voltage range” often enough.

For some such as myself, VCV Rack was the first real introduction to synthesis. It was likely a little harder to wrap my head around basic concepts in the beginning than those coming from years of Eurorack or hardware experience.

I understand that standards are fairly loose in the modular world however I think it would be great if many developers could adopt such a use of tool-tips as a sort of ‘best practices’ type of thing.

Also, Welcome hopangarcia118. I remember that I barely slept during my first month of magic with VCV Rack.

Most of the modules are open source, so go ahead an make the changes where you think they are needed. Most of the devs will be thankful you picking this up.

But, it is probably wise to check with the developer to find out if they accept pull requests before spending a lot of time on a module.

I’ve been doing module for 49 years now. I always struggled with patch documentation in hardware and resorted to all sorts of attempts such as making fixed “rack” patching blanks on paper and drawing connections and settings. I even for a while took 35mm photographs of my patches.

VCV is a dramatic improvement on the documentation situation since the patch file is the documentation. But, it is still a challenge to work with a new module and understand what it expects and does and how to combine that with other modules that expect and do things quite differently.

In a recent version of Meander, I added right click context info to all input and output ports and to tooltips. No one has mentioned that, so, I don’t know if anyone finds it useful or not. In the beginning, I added CV automation inputs to all Meander parameter controls as requested by several users. But, people expect CV inputs to be inputs to an attenuverter more often than as a direct set of the parameter value (actually not usually direct as the parameter value is not set to an obvious CV voltage value, but rather to a “rational” value, in Meander’s case, of 10v/N where N is an integer corresponding to the number of discrete states for the parameter or the floating point range of the parameter.

The end result is that Meander looks very complicated and is probably not a beginner module.

By and large, I personally feel that developing an intuitive but logical understanding of how modular works or can work is still a necessity. But, it can still be overwhelming, even to me after 50 years of working with it and coming from a very strong background in electronics before even starting with modular 50 years ago.

I laugh at myself thinking back, because I literally learned how to patch my first modular synth in my dreams before I got the synth built. At a fundamental level, it was totally logical. I still work out problems in my dreams that way

I have not used Meander in a patch recently and have been meaning to explore some of the recent changes I have seen you mention in your Meander thread. It’s quite a unique and lovely beast.

I appreciate the extra effort you have put in regarding the context and tool-tip info.

I usually get by just fine at this point. My comment wasn’t a complaint or even a request really. It’s just something I’ve thought about from time to time since V2’s release and this thread reminded me of the excitement I had before release over the possibilities tool-tips could afford so I thought I’d mention it.

This thread has also reminded me it’s been a little while since I last explored patching with Meander. I think today shall be the day

I was hoping developers would use jack tool-tips to indicate things like acceptable voltage ranges for example rather than just - in many cases, a repeat of the panel label.

I"ve done this with some of the Befaco range, e.g. to mention normalling behaviour, but there are probably places where it could still be added: examples

This thread has also reminded me it’s been a little while since I last explored patching with Meander. I think today shall be the day

then today is a good day

Meander is a gem among gems.

No one has mentioned that, so, I don’t know if anyone finds it useful or not.

I for one did, and thought it was good!

It’d be neat if some future version of Rack had simple visual CV range designators (including a “non-standard” one) that would optionally show up as icons on the left of the tooltip (rather than requiring devs to write it in text). FR incoming (when I get a moment), and I’ll point to this thread.

A lot of devs put this in the manual, which arguably where it belongs. Although tooltip is reasonable. Remember that tooltips for jacks is a new V2 feature (although I did it myself for 1.x), and at this point I notice there are a lot of modules that don’t specify anything, so you get the default “input #n” "

signal flow diagram is a good idea, too. I started doing them for my new modules, but unfortunately I never released them: 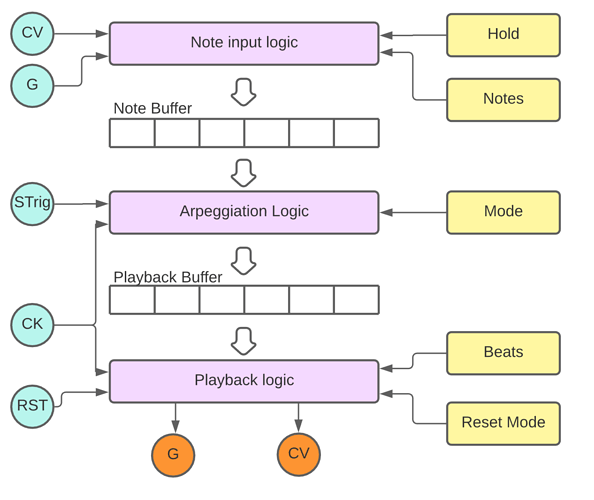 . I remember that I barely slept during my first month of magic with VCV Rack

Same here,…VCV as introduction to modular was lifechanging. I’m obsessed since.

Omri Cohen and Patch and tweak are a godsend. I’m a big fan of signal flow diagrams. I hope to make 1 for the Soma Lyra 8 one day🙄

The diagrams would be dope I’m gonna look into that. It seems my main problem is getting sequencers to run correctly. Or, rather, getting the sequencer to generate notes with the oscillator correctly. Gates and triggers and where to input out of a trigger to send and when to send triggers into a module is super confusing

Can you give an example patch and describe your Problem a bit more in detail.

If it is it a syncing/clocking issue there are multiple threads already discussing this (it is a very confusing topic because of the individual differences between modules).

Or I can offer to set up a simple patch like you describe above and you could compare the cables? Just name the modules you want to use