I’m working on the default template patch which is loaded the first time Rack is opened and every time you choose “File > New” (unless you’ve saved your own template with “File > Save template”). Its purpose is to show off many of the new Fundamental modules and give a good first impression of the sound and flexibility of Rack to modular beginners and experts. This patch is of course based on a common vintage mono subtractive synth. 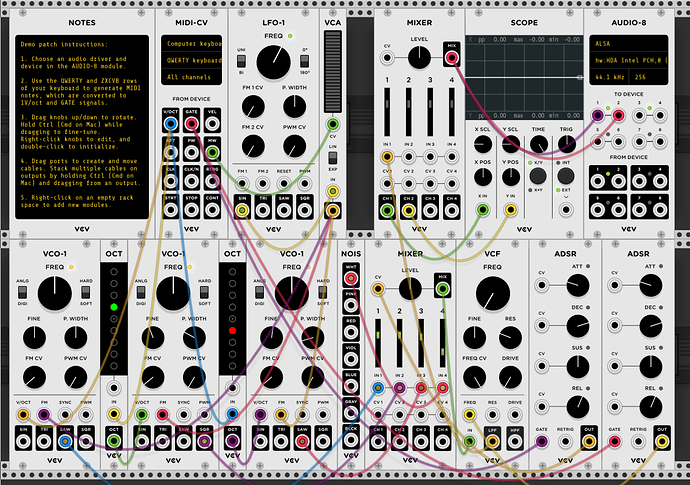 Ignore the cable colors, we’re working on that

Besides the purple, could be a feature

Besides the purple, could be a feature

Working Pitchwheel into the patch would be especially nice. When you’re new to Rack, it can be tricky to figure out how to setup an LFO used for vibrato (which you’ve already have here) and Pitchwheel for a +/-2 semitone bend. Having a working example of that in a default patch would be a nice additional touch IMO. Plus, it’s a classic feature of classic monosynths, so I think it totally fits.

@Vortico I think that last bullet about the Mixer bug is a potential landmine and could cause some deep consternation and confusion for someone who did not know about it, especially if you are tailoring this template to a beginner. I think it is reasonable for a user to assume that poly works given the multitude of videos showing off poly mode. I understand and sympathize with the lack of developer CPU cycles.

The fix follows the polyphony standard. I.e. if N>1 and M=1, “its voltage should be copied to all engines”.

Andrew, I am not a coder, just a user. I understand that your fix will conform to standards; I would expect that. You say: “If you load this with Rack v1” My issue is that you are asking for comments on a template that exposes beginners to a hidden bug that will eventually get fixed in v2. Users who open the template in v1 will get a surprise.

you are asking for comments on a template that exposes beginners to a hidden bug that will eventually get fixed in v2. Users who open the template in v1 will get a surprise.

Okay sure? I don’t see your point.

Seeing this default patch reminds me, this kinda patch might be very straightforward, but it’s still super intimidating for someone who wants to make the jump into modular, compared to the current default patch. (OTOH, pressing a key and hearing a rich sound immediately will encourage you to explore if your main concern is “but does it even sound good?”)

When I go to the websites of eurorack hardware brands, there’s always a really thick subtext of “if you don’t already know how this modular stuff works… go away, you’re not the target audience”, and VCV’s projecting a similar aura. Any plans for onboarding people who want to make the jump to modular but have zero clue where to even start?

I’m not concerned about this for the template patch. Complexity of demo projects/patches in DAWs doesn’t significantly decrease users/customers/retention, otherwise DAWs wouldn’t launch a professional artists’ project upon first launch. But most of them (Live, FL Studio, Reason, Bitwig, probably more) do this.

I think it’s best to introduce users to Rack with something familiar. “Hey, here’s a 3 osc mono synth with an LFO wired up for vibrato and a noise osc and 2 ADSR’s just like the Minimoog…See? This modular thing isn’t that bad!”

Then they can go in and pick it apart later. For that reason, I think this would be a much better starting point for newbies. You don’t have to touch anything and you can begin making tracks immediately with a pre-wired synth template. And as you get more familiar with patching, and start to wonder things like, “how the heck do I make the MW patch into an LFO and create osc vibrato” you have a frame of reference in this patch to compare against, which then gets into how you can combine modulation signals.

I dunno, just my two cents but I like it.

Yeah, it definitely doesn’t hurt other software! But VCV’s a bit different innit? Most DAWs target people who already have a general idea what the paradigm entails. VCV (I think) targets the many people who are curious about modular but have no real idea what it entails yet.

My own onboarding as an amateur music producer & synth enthusiast was like: see a friend post cool sound experiments on social media -> ask about the program she uses -> try out vcv -> default patch straightforward enough i can intuitively understand it -> ask her which modules to use -> be told to download them all -> suddenly i have 1000 modules and zero clue where to start, stop using vcv for 3 months, see if reason’s complex-1 or voltage modular are easier -> actually take the time to sit down and learn how VCV works -> actually start developing modules for it lol

This patch removes the “default patch straightforward enough i can intuitively understand it” advantage in favor of a patch that shows the potential of the bundled Fundamental modules as a complete system for learning modular. I think it’d cool if a fresh install could walk you through all of this eventually (like an examples folder and UI).

IMO, your qualms about the fundamental VCF and VCO in the initial post bring out the main issue with using this Moog style architecture in the default patch: this style of patch needs a characterful filter (and ideally VCOs) to sound impressive. It would be a fabulous default patch to showcase Vult VCFs and VCO. But for the fundamental collection, it’s too complex to be underwhelming.

Your back and forth with Aria brings out two directions that seem more promising to me.

A) Simplicity (Closer to current default)

Besides Aria’s point about not overwhelming new users, another virtue of a simple default patch is to be a useful default for more advanced users. (Bitwig’s default polygrid patch illustrates this perfectly, going even more bare bones than VCV with no filter.) Even the current V1 default patch is likely too cluttered to be an optimal default patch for the average user…

This option doesn’t preclude including well documented demo patches that showcase the creative potential of the fundamental collection.

The default patch would have to showcase impressive, inspiring features of the fundamentals package. If we are foregoing the benefits of simplicity, the default patch should make a first time user smile at the sight of the doors VCV opens for them.

With B, the patch would need to be easily understood, while also digging deeper into the amazing things that can be done with the fundamentals package. I’m picturing a “welcome to modular” experience that also addresses the “modular is only for experimental blip bloop” fears.

If going for B, it would be a shame not to tap into the community’s patch and sound design skills. Why not try a patch design challenge and see if any of what comes up does the trick?

This thread is inevitably mostly bikeshedding, so I’m not interested in this discussion. If anyone finds bugs or issues with the attached patch, let me know.

I will soon open a “patch competition” for demo patches included with Rack v2.

That’s indeed a good idea ! Some simple patches to not overwhelm newcomers, but also bigger ones to show them the possibilities !

yes, I think the opening patch is one thing( and here it is working fine),
and demo patches is something different.

I believe so, yes. Because of that, it will likely be after Rack 2.0.0 is released, since more Fundamental modules will be coming.

I agreed with @Aria_Salvatrice, it seem intimidating for new users, however I like this synth much more than the actual. here is my proposal: what do yo think about a splash screen that allow select one of multiples templates (synths and generative patches ) and even personalized presets ?