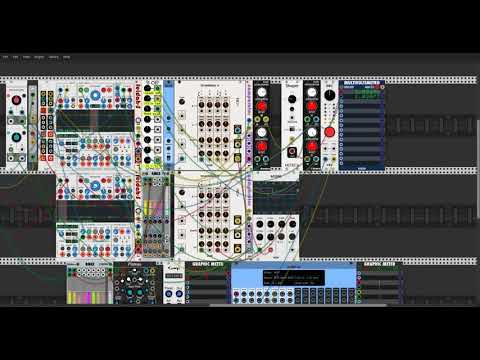 Start by hitting “play” on one of the simpliciters, making sure the bottom constant offset sits in the range (5,7.5). Stop looping by moving that same control outside this range.

The main challenge was finding the right module for the job, since the patch is not possible without an envelope generator that scans (takes a ramp input rather than a gate) and reports which stage it’s on. My first attempts using BZ-Mapper and pdArray were flummoxed by the latter requirement. I tried using HetrickCV Delta to make gates when the envelope started descending, but I found that it was not stable (small floating point differences during the constant portion of the envelope would read as descent). Scannibal did the trick. (Main downside being it’s not poly and takes up a lot of hp, but if you really need the screen real estate you can use teleport.)

Thanks for sharing. I still haven’t had time to figure out exactly how this works! Had a quick play around and it seems kind of unstable, in that looping would stop even when the atenuverter was in the right range. I’ll try and adapt it for guitar input when I get a minute, and see how that sounds.

I’ve had some problems with looping stopping when the loop size is super small, but above 100ms I wouldn’t have expected problems.

The principle behind it is simple: use trapezoidal amplitude envelopes. When one trapezoid starts descending, the next one starts ascending. IOW, When the currently playing slice starts on the descent stage of its trapezoid, you start the next slice and its accompanying envelope.