This is something that’s been discussed elswhere, but it’s still driving me mad! I don’t know if it’s an issue with Cubase or VCV or with my set up.

Using the Midi-CV module, I can sync up a clock in the VCV Rack plugin in Cubase 12 using the clock output. If I start Cubase from the beginning of a project, the BPM matches and everything is nice and synced. No problems there at all. Unfortunately, no matter what I do - if I start playback from anywhere other than the beginning of the project, the pulses in VCV will be out of step with Cubase.

I can’t find anything in the Cubase sync set up or on VCV that would make the Continue pulse line up properly with the timecode. 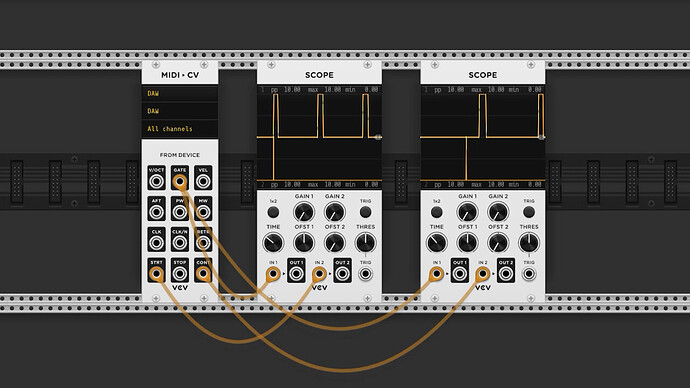 if I start playback from anywhere other than the beginning of the project, the pulses in VCV will be out of step with Cubase

Hi, this is perfectly normal. IE: just the way it is.

There is a big difference between the 2 environments, one is linear and operates linear, the other has no such concept in it.

The closest you will get to “get it to work”, is instead of starting from “anywhere”, try starting from a locator point that is exactly on measure.

But then still there will be several of variables that can disturb the process, and make it out of sync.

Some related info from another thread

Hi All. There seems to be quite a bit of discussion about this issue, various methods to come to grips with it and the fact that it depends on your setup. This said, I do everything with a laptop and a mouse. No external controllers and just the available drivers from windows. (WASAPI) I tried ASIO4All, but that didn't really work that smoothly. And, oh yeah,I don't record, playback or edit any audio in the DAW. For audio editing I use Wavosaur but I'm looking at Audicity for this. So everyth…

Some related info from another thread

Thanks for that. I thought I’d read everything here (and in the Steinberg forums), but I’d missed that thread, so I’ll have a look.

There is a big difference between the 2 environments, one is linear and operates linear, the other has no such concept in it.

I appreciate that - but all I want is for the Cubase timecode to tell a clock in VCV where the first beat of the bar is. I’ve got a few workarounds, depending on what I’m doing, so I can make it work - but it’d be nice if it worked without having to add an extra process.

In case anyone’s interested, this is my best method for achieving reliable clock sync throughout a Cubase project. 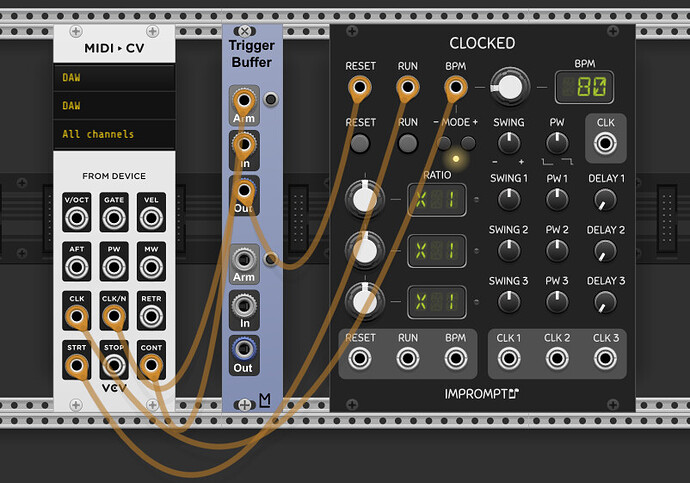 This way - when you press play in Cubase from anywhere in the project that isn’t the start point, the Trigger Buffer will arm and then wait for a pulse from the CLK/N output - which will be on the first beat of a bar. The clock will then reset itself and be perfectly synced to Cubase.

I do not combine DAW and VCV in this way, so I haven’t really had to solve for this problem.

I guess, generalizing, this is about sharing a common time reference between VCV and DAW (e.g. via MIDI).

So, maybe this is just about syncing time via MIDI Time Code (SMPTE)?

MIDI time code (MTC) embeds the same timing information as standard SMPTE timecode as a series of small 'quarter-frame' MIDI messages. There is no provision for the user bits in the standard MIDI time code messages, and SysEx messages are used to carry this information instead. The quarter-frame messages are transmitted in a sequence of eight messages, thus a complete timecode value is specified every two frames. If the MIDI data stream is running close to capacity, the MTC data may arrive a lit...

A thread on this…

Anyone know how to convert a timecode, aka external bpm into a midi signal suitable for clocking VCV? There are a few ways to sync other DAW’s and VCV but this seems to be the most efficient, and universal. Thanks.

That is a good idea. I have not tried it yet, but a CC-Automation with a short pulse should do the same trick but is more versatile for starting (and stopping) at different locations of the song.

…a CC-Automation with a short pulse should do the same trick but is more versatile for starting (and stopping) at different locations of the song.

Definitely - or even just using gates from midi notes on an unused channel. But I was after something that was more free running, but would still stay on the beat - if that makes sense.