Part 2 of an occasional series where I share largely unusable and pointless guitar effect. This week, modulating a pair of phasers with randomly clocked sample and hold, instead of the internal LFO

As you already know, a phaser effect is an all-pass filter swept up and down by an LFO. Well, the beauty of modular is the ability to use so many different sources of CV modulation, and Nythsi’s NYSTEREOPHASER has an input for external modulation meaning we can use sample and hold instead of a boring LFO. Unfortunately you can’t independently modulate the left and right channels, so I’ve doubled everything up to create a wider sound, then copied the whole again on another channel, for two channels of stereo step phasing. The sample and hold module (Mockba Modular SHEight) is being clocked by Hetrick Dust to make the steps completely random - obviously you can patch in a regular clock if you want a tempo-synced step effect instead. Naturally, there’s tons of reverb and delay from Chronoblob and Plateau on the mixer’s aux sends.

I’ve used free modules in case anyone else wants to use the patch:

Roughly speaking, a phaser effect is an all-pass filter swept up and down by an... 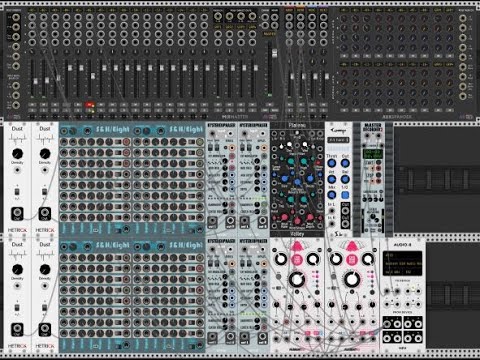 Man, you are a modern wonder!! That was beautiful!

Will it work with VCV sound sources eg. AI Resonator or Macro Pluk as guitar sound! I am going try it anyway! Thanks so much.

Yeah, should work with anything really! Just take the cables out of ‘from device’ on the Audio-8 module, and connect to a sample player, oscillator module or anything you want. I’ve got an old Juno 6 which I’ve plugged through a few guitar patches, they don’t always sound as good as you’d think. Maybe it’s because all my patches are kind of ‘tuned’ for guitar, and it’s a much more narrow frequency range than synths, but ultimately it’s just effects so still works. Enjoy!

FYI, Frozen Wasteland’s Just A Phaser lets you modulate left and right. I use it for varying Jarre-like effects.

A good phaser is a wonderful thing!

Thanks Paul, I didn’t spot that! I did try that one too, but Nysthi seemed a more pronounced effect with what I was doing here. The Frozen Wasteland one is really good for ‘pinging’ with a short burst of noise and making percussive sounds. That’s another patch I haven’t finished

Your content is the kind of thing I envisaged being a regular addition but I haven’t been able to give the group as much time as needed.

Hi Paul, yes I’m in that group but always forget to post there! I would have thought most people in the effects pedal group are also in the main VCV group, but I’ll stick it up anyway, thanks for the reminder.