Just updated it to refresh every 15 minutes.

Not too shabby so!

Just to update on last weeks gif. I’ve been busy with the BPM value on the LFO and a new module, I may just release a duplicate module of trim with the BPM value instead of the Hz value as I came across some issue when changing the display text on the fly. It may be temporary as I have been thinking about doing a clocked LFO also. 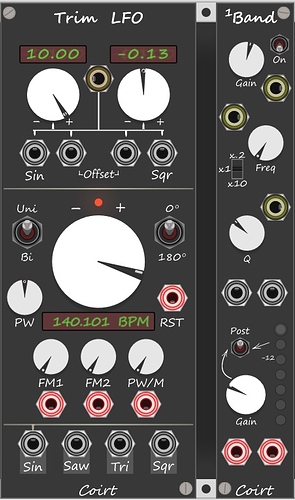 It is not yet ready but hopefully by next you will see it in your rack. It is a peak EQ. The final designs may change and I’m still not sure if I want to include mod inputs on 1Band as they can be quite unstable for frequency. The plan is for it to be on your master chain as a utility EQ.

Just a test build for 1 band and experimentations

Iv’e decided to include the mod inputs on 1 Band. Far too useful, though there’s a small price to pay. Frequency centre is limited to about 220Hz - 20kHz on the modulation anything below that will start processing the mod source along with audio and cause mayhem, it will still process low end and sub it just won’t respond to modulation below 220Hz. Until I figure out how to not process the mod source coming in this is the best solution.

Musically speaking I think it can sound pretty good. The videos posted earlier are using the inverted signal to listen to how the parameter values will sound and you can get some nice effects from it also when it is feeding itself. Almost there! Just a couple more design tweaks.

Iv’e submitted v0.6.4 update, so you should see 1 Band in you rack soon, however I had to disable the mod for frequency as the bug I thought I fixed came back at the last minute.

Will there be a stereo input for the Eq. module?

It is dual mono. 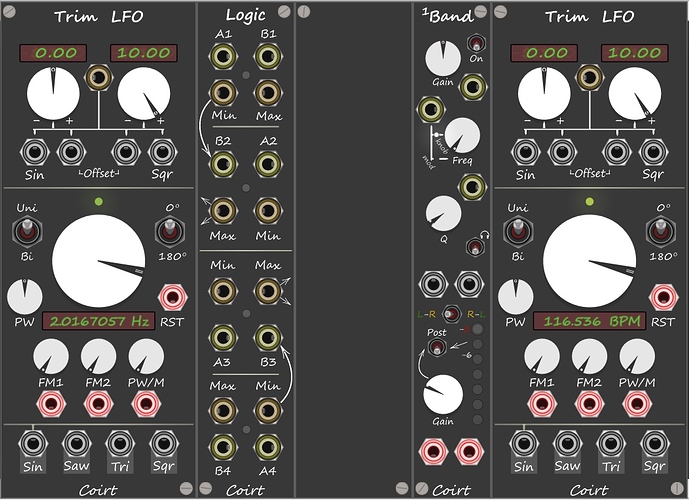 Changes include:
Trim LFO (Hz) defaults to 2Hz same as BPM**
Added a manual reset to Trim LFO click the “RST” label to reset phase manually
Enabled all mod sources on 1 Band. Frequency modulation response = 110Hz to 20Khz
The default frequency on 1 band is 220 Hz (A3)

**I can default this value to a lower multiply of 120bpm(2hz) if its preferred, just let me know.

Enabled all mod sources on 1 Band. Frequency modulation response = 110Hz to 20Khz
The default frequency on 1 band is 220 Hz (A3)

This looks pretty useful. I had hopes for this module and thought I’d use it a lot. Then I realized that I couldn’t modulate everything and I, uh, sort of lost interest. In my defense there are a lot of other modules though I think only one other parametric eq that i can think of.

As I said in a previous post I had to disable at the last minute as I found a bug I thought I had fixed (sending really fast modulation to freq caused major issues), It is most definitely fixed now though spent 2 weeks fine tuning and fixing it.

Don’t think of it as an effect its an EQ with utility functionality, the mod sources are there to be used in moderation really but they can get some interesting results also.

What is the other Parametric EQ? Couldn’t find any that’s why I made one.

What is the other Parametric EQ? Couldn’t find any that’s why I made one.

I was thinking of the charred dessert eq but maybe I’ve misunderstood something.

Just looking into that one I see there is a fixed gain that boosts to 6dB for the peak type. 1 Bands gain is ±32.5dB, it has a Q factor of between 2 and 40 compared to 0.1 and 6 on Jerry’s module, 0.1 is fairly wide (takes up most of the frequency spectrum which is between 30hz and 14kHz) 6 is also quiet wide, 1 band defaults to 15 Q factor. I can’t really compare them, they are both miles apart and both have their own usefulness.

I get how frustrating realising something doesn’t work to your expectations can be, don’t hesitate to report something if you think it doesn’t work as expected. The goal of development is to get it to the end user if there is something I don’t know about I can’t fix it. User feedback is a major help!

have you tried the southpole etagére and deux etagére EQ modules?

Is that one parametric? A parametric EQ boosts or cuts.

Yes, I agree it is an excellent EQ little power horse!