New user here, loving VCV Rack but totally new to modular. I’m comfortable now with setting up chord progressions with a clock and sequencer (mostly the Bogaudio addr-seq for this task) and something like VCV Chords (I usually use Chords since it’s so easy to have full control over each specific chord voicing), but that’s always moving in a regular steady rhythm, for example a four step/chord progression with one chord per measure.

I’m wondering if there’s a relatively simple way to have, for example, the first chord last 5 beats, the second 3 beats, the third 3 beats, and the fourth 5 beats, something like that. I could take the clock out of the picture and just trigger each chord myself, but then the rhythm won’t be 100% accurate…I’m hoping since I’m new to this that there’s something obvious I’m just overlooking/don’t understand yet!

Off the top of my head, Squinky Lab’s Seq++ and RCM’s Piano Roll can have notes of arbitrary lengths. There are probably many others, but I won’t think of them until after I finish my morning coffee.

I’m not sure I get this progression.

Interesting, I’ll have to take a closer look but it seems like Seq++ might do the trick. Thanks!

Just a random example of a rhythm for a chord progression with 4 chords, 16 beats total. (as opposed to each chord playing for the same amount of time, for ex. 4 beats each)

In that random example you would either have to delay everything else in the track by 4 bars in order to get the first chord to play on the 11th beat or have the first chord play on 11.

It is sync / reset you are looking for. Sequence it as normal playing from the 1st bar/beat then send a reset on the 11th.

This upcoming commercial Rack module isn’t quite ready for release, but I can’t keep it to myself any longer:

Thanks! And wow, that Entrian sequencer looks really great.

You can accomplish this with Computerscare Laundry Soup.

In to the top text field, clock Laundry Soup with your base clock, and send Laundry’s output to VCV Chords’ ADV input. I think you’ll also need to hook Laundry Soup’s EOC output to Chords’ RESET input to make sure your sequence repeats every 4 chords (16 beats).

Ah, Laundry Soup is perfect for this. That worked really quickly and easily. Thanks so much!

I would think you could use Seq++ to program any rhythm you want. Use the gate output to clock your random modules.

BiDoo’s dTroy would probably work too, it’s based on the intellijel metropolis and you can control the length of each step with a slider and also whether it’s held, repeated, a rest, etc.

Great suggestions, thanks. The Seq++ and dTroy are both really powerful. A lot to learn!

A lot to learn

We will be the first to admit that Seq++ does have a learning curve. At least to get fast with it. In the meantime I hope you enjoy reading the long-ish manual.

One thing I’ve been experimenting with a lot recently it’s creating sequences, then using a quantizer and modulating its root note with another sequence. You can get some pretty neat progressions by doing this. It usually looks something similar like this: 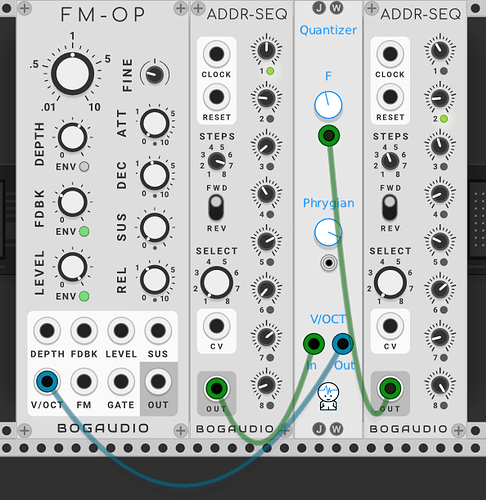