This patch has SO much potential. I’d love for people to try it out and let me hear what they come up with.

I always have a question when I come up with something like this: when is what’s there enough? I find this compelling without the other accoutrements I usually dress up my music with: drums & other instruments, samples, sound effects. But this is exactly the musical idea I was going for.

A fun thing about this mix is that there’s no EQ or compression. I normalized it before uploading it, but because I’m on my junk laptops I don’t have CPU power for the fancy shit like that. And again, it’s a question of when is enough. Sometimes just hearing what the modules do without a ton of audio sweetening is good too.

I am a big fan of limited voices and letting the modules speak for themselves.

I love this patch - I agree, there are a lot of places it can be taken.

I then added a pair of switches to allow the choice of OR or XOR to drive each Squonk. I could have used a single switch, but opted for two because I wanted one to be OR and the other XOR.

I also added the Kitchen Sinks and the switches to be under 8Face control. I’m thinking it also makes sense to add the Bernoulli gates and delay settings, but didn’t bother

Finally I added Shift Pedal to make it convenient to start/stop on stage with flute in hand.

I took the patch to a jam session with a jazz guitarist, percussionist, and another synth player, and I added my flutes - they all loved jamming to it. I also took it to an outdoor open mic later in the day, and got a lot of great feedback. Lots of people boppin’ while I played my flute to the patch.

I hope to get a live recording with my flute(s) from Monday’s VOM.

I’m really glad you posted the patch. It showcases a bunch of techniques you have posted elsewhere, and it really helped crystalize the ideas in my mind. I definitely need to start using 1Pattern in my own patches - I love complex poly meters. And it is great to learn Squonk.

This one the only thing I’m doing is using VCVRackPro2 VST as a source of sequencing data for Ableton Live. The sounds are all Ableton devices (Tension and Operator) iirc.

The only VST plugins I have installed on this machine are the AudioThing ones (& rack) so this one uses a bunch of the great Audiothing processors: Wires, Thing - Motor & Thing - Texture.

The sequencer is a couple of Nysthi Squonks, through Probably Note (to get note variations) and VCV Quantizer (for final scale quantizing).

The drum kit I’m using is some stock Ableton Live drum kit that has some bass notes & vocal samples in it that drup in now & again for comic effect.

I took the patch to a jam session with a jazz guitarist, percussionist, and another synth player, and I added my flutes - they all loved jamming to it.

This makes me really happy, would love to hear recordings.

This could be taken a bunch of different ways: You can thin out the sequences and use it for more of a bass voice. The Kitchen Sink FM can make great deep bass. Percurssionist would be awesome because the 1Pat can make a really wonky rhythmic pattern that takes a long time to repeat, but a drummer will pick up a groove and reinforce it; in 4, in 12/8. Especially cool would be percussionist playing some African/Euclidean beat patterns against the patch’s wandering beat.

My version of techno. If you don’t think Squonk is deep, get a load of this.

This is minimal techno, it’s a Kitchen Sink voice playing 2 different columns of the squonk. The second voice I run the CV & gate through a signal delay, so that voice’s notes hit at a fixed offset from the triggers running the first voice.

If you want to blame this on someone, blame @synthi as it was his suggestion that I mess with Nysthi Rael.

Rael is a bunch of things I don’t understand, but it is a 12 channel clock generator. I use it to generate some wonky clocks. It might be hard to tell but the off-kilter beats are what happens with a standard techno beat when the clocks are subject to random modulation.

I hope Antonio doesn’t mind if I include what he wrote about Rael:

DELAY can be also 0.0 (immediate GATING)

TRIG can be used chained sequences of timed GATING

every single LINE can be looped (to generate wobbly clocks?)

the probability is from 0 to1 and works like that

for example you set a delay o 2.0 (2 secs) and probabilty of 0.8 will mean that the the delay time will change from a 0 to 20% everyt time the delay is retriggered in this case time will oscillate form 1.6 to 2.4 seconds

Ha this is some destructive sampling. I was on hold with the US Government for nearly an hour so I recorded the hold music. This is the recording:

The rhythmic, noisy sound in this track is actually the government hold music shredded with @synthi’s Confusing Simpler, and @modlfo’s Vult filters.

The melodic sequencing is actually @synthi’s Dual 5 step sequencer, where I make 2 additional CV-gate pairs by sampling the sum of the two 5 step sequences.

I haven’t had a chance to listen yet (got to go to bed now) - but I love the concept!

What a great idea!

@synthi (Antonio Tuzz) challenged me to find uses for his module Rael, which is a trigger processor and a ton of other things. One of those things is looping triggers. I don’t understand MOST of what’s going in Rael, but I can set it up to generate unsteady clocks. You can set a particular row to loop, and set the length (optionally and usefully) to track a clock input. The fun thing is that you can tweak a probability that will lengthen or shorten the time between triggers. So… probabilistically unsteady clocks.

It’s also fun to put these wobbly clocks up against regular beats, which is what I’ve done here. It makes different sounds come in and out at a semi-random but well-defined way. Stack up a bunch of that it’s a never-the-same-river twice thing. You can let them play forever and they’ll continually shift in time between each other.

And because I’m That Guy I’m using long dub delays on everything, and that Befaco Spring Reverb, which does something special when you drive it at healthy levels.

Since I’ve decided to not care about Things Always Adding Up, I have a bit of a trap for DJs at the end. Techno tracks are supposed to thin out to a few sounds, but stay in a recognizable rhythmic pocket, so it’s easy to mix in the next track on beat. This does something different: It starts out adding up rhythmically and gradually falls apart.

I upload the Rack patch so people can maybe borrow some bits, but my standard practice is to use a lot of paid modules & Host-FX running stuff like UAD Powered Plugins. 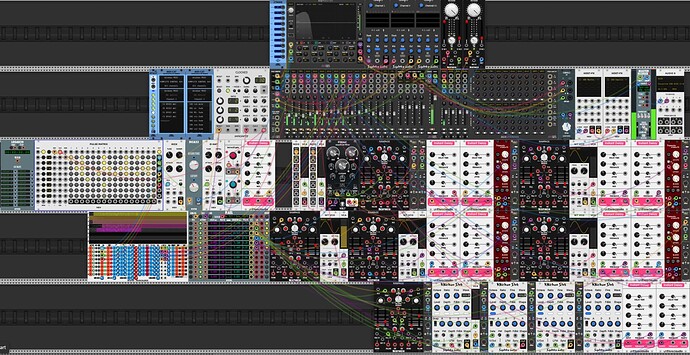 Nice one! - I really like hearing you so beat-y!

I’ve been a Detroit Techno fan for 30 years, and I used to try all the time to make techno. At a certain point I stopped trying and started just making what I want to hear, and letting the piece dictate what it wants to be. This one wanted to be techno.

The deep secret of techno is that the beat holds together whatever you add to it, even - as with this track - you add things that are completely off the grid.

Same patch, different performance. I usually do mastering as a separate pass, but this patch runs through a couple of Universal Audio plugins, Manley Massive Passive & Empirical Labs Distressor. That’s a combo that adds a ridiculous amount of vibe to the sound.

Are those sound clips fine with everyone? I seem to have some issue with my broswer I think…

I noticed there was a 30 second delay when I clicked ‘play’ before it started, and that could be my server, or the community forum server, cosmic rays, whatever.

You can download from there by clicking the 3 dots to the right as well.

So do you usually prepare your patch and then you just enable/disable certain parts during performance? Or do you also re-write your tune during the performance? (E.g. was the kick change around 4:40 pre-planned or ad-hoc?)

So do you usually prepare your patch and then you just enable/disable certain parts during performance? Or do you also re-write your tune during the performance? (E.g. was the kick change around 4:40 pre-planned or ad-hoc?)

I do both. In this case I have a Stoermelder 8face that’s got several drum patterns saved, but I also edit the sequence live. And all the tones are oscillators and I change pitch by tweaking the frequency knobs.

If you listen to Jeff Mills or Drexciya, they record live performances and edit them. The track’s progress comes from using channel mutes and switching up patterns, and sometimes live playing.

So many techno tracks were drum machines & synths, into a Mackie 1604 mixer (with the channel levels flashing red) direct to DAT.

Someone who through-composes every note in a piece probably thinks that’s cheating. But when it works right, it’s compelling. I remember long nights in the 1990s doing take after take with a friend trying to get a live version we didn’t have to edit. My work with Rack is all based on working that way.

Another day another swerve.

I’ve done a lot of things kind of along these lines, and used some of the same sequencing tricks.

But this one (according to Nysthi Rael) is playing at 15bpm.

The patch needs a sample which is here: