All I want is any CV sequencer - that I can send a “start” signal to play it “one shot style” and then it stops - but does not “hold the stopped note” - just turns off after the sequence burst - and then lays dormant stopped until another “start” signal is sent to it.

If anyone can point me in the right direction I appreciate it. Also, not many people know this but this:

ShapeMaster (free) can do that.

Just set the Trigger mode to: Trigger/Gate, cable your trigger to the T/G input, set the cycle length to whatever you want and draw in whatever sequence or CV you want it to play. You might want to change the Range setting (0-10V by default) for V/Oct sequences. You can also snap your shape to quantised grid lines if you want.

By default retrigger is on, so if you don’t want it to retrigger until it has finished playing the cycle, then turn off ‘T/G, SC - Retrigger’ in the channel setting (right click on the channel number button to open that menu).

If you just want a burst of pulses then a dedicated burst generator is probably quicker to set up, but ShapeMaster offers the flexibility to make a burst of literally anything you can draw.

You can try and envelope the clock signal. 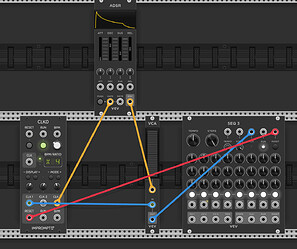 but does not “hold the stopped note”

The sequencer doesn’t know what you want to do with the CV output. So it depends on how you setup the voice that will sound.

If it is a VCO you can have the audio output of that VCO also be controlled by an enveloped VCA that gets the same trigger as the first envelope.

Wow Steve - what an awesome answer - its going to take me a few days to digest and test - I just put shapemaster in one of my patches and messed with it a minute and see what you mean to start - but man - I have so many questions about various modules and uses of / how - are you open for some more detailed discussion? I discovered VCV Rack about 3 months ago and have been using it daily since I found out about it - love Omri Cohen - lol.

Theres an insanely detailed user manual for SM on github/link in the library. Theres not much - if anything - u cant do with this beast

Yeah! This works very well! Send a trigger from clock to control the vca which in turn controls the other clock that is running the sequencer to only run during the “hot part” of the enveloped clock signal - I just followed your image and tweaked the values and it works great! Thanks much!!

Glad it works for you, there are lots of different ways to do this.