Can you recreate this bug? 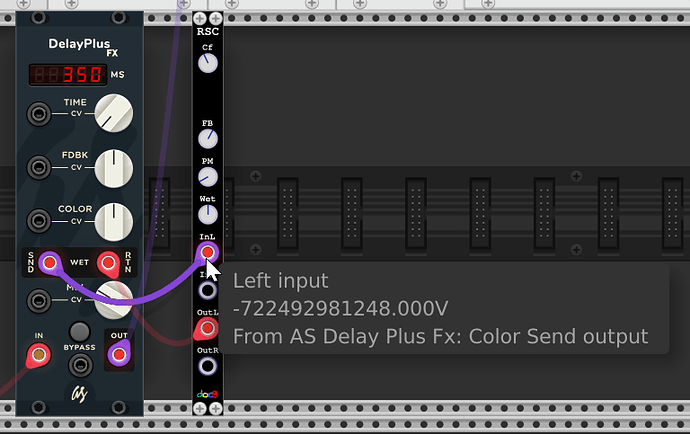 Yes, I also get several million V on the output.

Not sure that is necessarily a bug. Feedback can inherently get out of control under the best of circumstances, and you have recursive feedback going on. The Delay module is generating its own feedback, the sum of which is fed into the reverb, which also is generating feedback, which is then fed back into the delay.

I’m not surprised the output is exploding. If you dial back the feedback from one or both, then all is good.

You might argue that the module(s) should limit the output, but that is not a VCV standard.

It is a grey are of the standard, but the standard suggest clipping. I’ll bet Fundamental doesn’t output infinity.

Yes, especially gray when the documentation suggests clipping, but none of the Fundamental modules implement clipping that I have seen.

I’ve actually done a lot of investigation of this with my Fundamental constructs series (which sorely needs updating with the recent Fundamental additions) I haven’t tested everything though. I am especially not sure about the Audio module(s), though they are Core as opposed to Fundamental.

I actually find it handy that outputs are not always clipped or limited. It opens up some interesting patching possibilities.

What use do you have for a delay like this? It’s a nice effect with a hardware delay that you get usable infinite repeat with distortion. Does the fundamental delay really not clip?

Yes, I also get several million V on the output.

That was also my immediate reaction.

That is another one I haven’t spent much time with. I just did a quick test with the Fundamental Delay, and it can very quickly amplify out of control with feedback. No clipping that I see. It quickly reaches nanV, and then I think the module must be deleted, or the patch restarted. I haven’t found a way to reset a module to a healthy state once nanV is reached.

I tried out some of the delays I have sitting around. some of them do feedback into insanity, some don’t. shrug?

Fun fact: a typical lightning flash is about 300 million Volts and about 30,000 Amps.