how do others here approach creating “broken chords” in vcv? my attempts have mostly used a gate sequencer to set the timing of each step and sequential switches to distribute the chord notes across several oscillators with independent envelope generators… but i’m wondering if there is an easier way to do this? thanks for your thoughts!

I don’t think I have created a true broken chord. I do play chords as arpeggios a lot, using sequential switches, etc. I use FM-OP a lot for these since it has its own envelope generator.

I’ve been getting the chords as poly by MERGEing as needed then using SPLIT to separate out the bass note from the rest, generally pushing that towards a module like PIGS or others good at bass voicing. Then using BRANCHES on each note other than the fifth to get some variation, the logic something like

then modulate those percentages.

Yeah, I use Bernoulli Gate also, although I did not recognize the “Branches” reference at first.

I had fun this morning using a Markov chain to implement your approach, rather than the Bernoulli Gates. Specifically I used MarkovSeq by Sckitam to set up a 3 state Markov transition matrix. These “states” are actually triggers to control three different processess where one plays the note normally, one skips the note and one plays a burst of the note. I created 3 such groupings of modules where each one is in charge of handling one of the notes our of the triad chord I feed it.

When you play bursts of a chord note, how many pulses in the burst typically?

I do this. Use signal delays to break up the chord in time. Use a VCV SPLIT to get the 4 mono voices of the chord, then send them through signal delays with different delay times. I usually use VCV CHORD but that’s a paid module & I tried to make a patch with all free modules.

Interesting! I never would have thought of anything like that.

Do you quantize the delays to keep the notes on even subdivisions? Or is the result rhythmically free form?

I use the AS Signal delay which pairs with the AS BPM Delay/MS Calc, so you send AS BPM a 1/4 note clock and it puts out voltages that represent various delay times as a function of tempo.

You can just tune the delays by hand as well.

But the real fun comes when you use a router to change the delay times on the fly. AS Signal delay does it’s best to do the right thing when you’re constantly changing the delay time, but when it’s glitchy it’s interesting too.

Do you quantize the delays to keep the notes on even subdivisions? Or is the result rhythmically free form?

Depends on the state of the patch. If it’s a very slow droney tempo like 45 bpm then can get away with anything up to 6 or 8 pulses, but normally 2,3 or 4 (can also be randomly branched with a Bernoulli gate) sounds good to me.

Oh that patch got messy and SQUONKED (Eh, @synthi ?)

Well, I’m not sure I would wish my emergent patch on anyone, but if anyone is interested, here it is, using Markov chains for breaking up the chords. 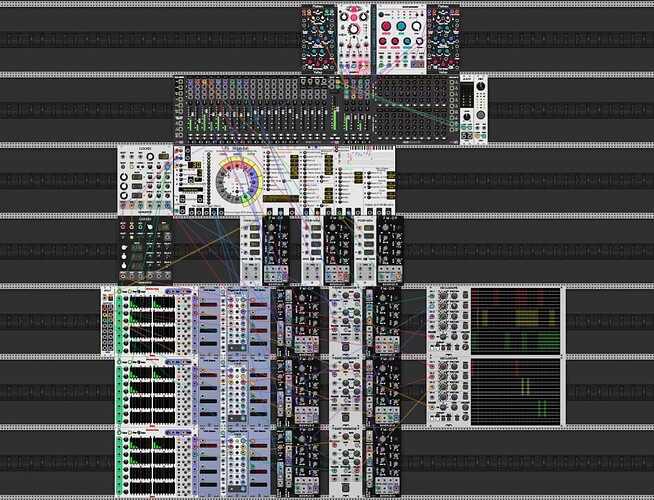 If anyone prefers organic, here is the same broken chord patch with a bunch of Organ Three’s rather than FM-OP’s.

Oh that patch got messy and SQUONKED

Cool. I’m not sure if I am hearing everything as intended since I do not download any plugins that are not in the library. What does Stoermelder-P1/Stroke do?

i like this concept - i’m going to try and incorporate some sequential switches to modulate the timing of the second, third and fourth notes. thanks for sharing!

P1/Stroke maps computer keyboard to controls. I have it set up where ‘A’ is copy value and ‘D’ is paste value. So I can set one fader on MixMaster, type ‘a’ with the mouse over it, then move the mouse to the next fader and type ‘s’, and it copies the value.

It’s good for e.g. tuning a pair of FM Operator/Oscillators to the same fine pitch offset.

But it has nothing to do with the sound the patch makes.

was using it to occasionally push notes to other octaves

Today I am playing around with using Glass Pane to introduce variations. But, I’m really having to dig deep to understand what all I can do with it